A Little Hatred by Joe Abercrombie

The fires of industry are smouldering. The Union, the great federation of kingdoms centred on the island of Midderland and the city of Adua, is industrialising and modernising at a frightening rate. Great factory districts, squealing with machinery, now sprawl for miles as they pump out vast quantities of goods. It's a brave new world, one in which the little person is at risk of being crushed. Seething discontent at joblessness and the new order threatens to erupt into outright rebellion. As the Union tries to strangle the nascent revolution in its crib, another crisis erupts in the North when the armies of Scale Ironhand invade the Protectorate, controlled by the Union's allies. 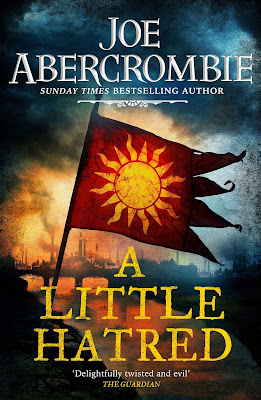 As war and revolution threaten the Union on every front, the fate of the Circle of the World falls upon a handful of unlikely figures: Savine dan Glokta, the daughter of the royal inquisitor and a shrewd investor; Crown Prince Orso, a wastrel and drunkard; Vick, a young woman in the Breakers, the would-be working class revolutionaries; Gunnar Broad, a military veteran trying to get his life back; Stour Nightfall, a Northern warrior with a ridiculous name and evil ambition; Rikke, daughter of the Dogman, blessed (or cursed) with the magic of foresight; and Leo dan Brock, the Young Lion, a brave and reckless warrior who cannot see the big picture.

It's been - somewhat startlingly - seven years since Joe Abercrombie last visited the world of his First Law saga with Red Country. Since then he's been moonlighting in YA (with the Shattered Sea trilogy in 2014-15) and short fiction (with the Sharp Ends collection in 2016), but his return to the First Law world with not just a novel, but a full trilogy (entitled The Age of Madness) is welcome news.

A Little Hatred is very much just what most readers are expecting from an Abercrombie novel. It's fast-paced, violent, lusty and intelligent. Not keen on resting on his laurels, the novel also sees Abercrombie moving into new territory with a lot of socio-economic musings. A Little Hatred is a novel about a world in turmoil, not just from war or religious schisms but from its own Industrial Revolution. This isn't totally new ground for fantasy, with Terry Pratchett's Discworld novels and China Mieville's Bas-Lag series both delving into industrial chaos, revolutions and modernisation, but it's still an under-explored idea for the genre.

The book is also concerned with the next generation, the children of great characters growing up in the shadow of their famed parents, whilst those parents face the truth that the great exploits of their youth haven't led to long-lasting peace and happiness. The North and the Union are still at each other's throats over the North's conquest of Angland and the Protectorate, whilst (in the wake of the events of Best Served Cold) the Union and Styria have fought three bloody wars to no satisfactory outcome. Even the collapse of the Gurkish Empire, removing a key threat to the Union's southern flank, has caused its own problems as hordes of refugees flee to Midderland, sparking a wave of racist xenophobia. A Little Hatred is about a world in change, not from the typical epic fantasy stand-bys of ravening monsters and evil sorcerers, but from the changing page of history itself.

Characterisation is a key strength of Abercrombie's and he gets to exercise that skill with aplomb here. Most of the protagonists are complicated people, with admirable and detestable traits, and it's to Abercrombie's credit that he makes them all interesting and compelling, even when you want to smack them for making dumb decisions. Focusing on new characters is a good idea, as it makes the book an easier entry point for new readers. The book is certainly improved if you've read the seven previous First Law books (The Blade Itself, Before They Are Hanged, Last Argument of Kings, Best Served Cold, The Heroes, Red Country and Sharp Ends), but they are not strictly necessary given that the novel does a good job of establishing the situation and characters.

The book is excellently paced. Abercrombie's never written huge doorstoppers, but some of his previous books have been quite big. At just over 400 pages in hardcover, A Little Hatred is focused, fast-paced and furious, taking in revolutions, battles, betrayals, stabbings, flights through the countryside and political intrigue at the highest levels, with a reasonably large cast. The pace never flags and leaves the reader eager for more.

If there are weaknesses, they are minor. The Union's industrial revolution is impressively vivid and impeccably-researched, but some may feel that it's also hugely unrealistic, given that in the First Law series the world was more like a 15th century late medieval/early renaissance setting. It jumping forwards about 300 years of technological development in less than 30 years feels a little like a contrivance so the author can have fan-favourite characters still showing up rather than dealing with a whole new generation. However, this bug is also something of a feature: as the novel ends, it becomes clear that this massive, rapid progress may be explained by other means, which opens more questions for the sequels.

As it stands, A Little Hatred (****½) is vintage Abercrombie, being smart, funny, brutal and compelling reading. It is available now in the UK and USA. The second book in the series, The Trouble with Peace, will be released in 2020.
Posted by Adam Whitehead at 14:36