BATTLESTAR GALACTICA reboot to be rebooted, for some reason

The Battlestar Galactica reboot is getting a reboot, because that's how things work now. 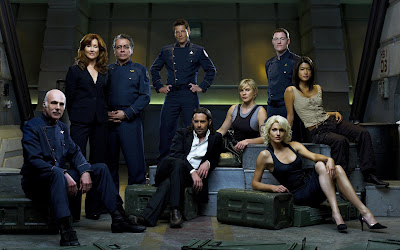 NBC has tapped Sam Esmail, the creative genius behind Mr. Robot, to take charge of a third iteration of the Battlestar Galactica franchise. The series will spearhead NBC Universal's new streaming service, which has the decidedly underwhelming name of "Peacock."

Battlestar Galactica was created by Glen A. Larson and aired as a single season on ABC in 1978-79, followed by a half-season, mid-season replacement sequel series called Galactica 1980, which is best being never watched or remembered. The original Battlestar was quite popular, but the absolutely titanic budget for the series prevented it from continuing.

In 2003 the Sci-Fi Channel, as it was then called, rebooted the show with Ronald D. Moore as executive producer and showrunner. The rebooted Galactica was a darker, moodier affair, much-informed by 9/11 and the War on Terror. With its low-fi aesthetics (no lasers, cute kids or robot dogs) and gritty attitude, the show won a whole new legion of fans as well as widespread critical acclaim, including Hugo and Peabody awards and multiple Emmy Awards in technical categories. The New York Times declared it one of the twenty best shows of the 21st century so far - a peer of The Wire, The Americans and Breaking Bad - just a few months ago.

Battlestar Galactica 2.0 concluded in 2009 with a highly divisive finale - one arguably even more polarising than Game of Thrones' or Lost's - before following it up with an unsuccessful spin-off show, Caprica, and a one-off TV movie, Blood and Chrome, in 2013. This iteration of the franchise has continued to be developed in video games, such as the excellent Battlestar Galactica: Deadlock, and a well-received board game and new miniatures game.

The one interesting thing about the idea is the creative talent involved. Previously, X-Men director Bryan Singer had been attached to a film reboot (for the second time, having previously worked on a TV version in the late 1990s and early 2000s that was superseded by Moore's), which would have been the wrong medium. Sam Esmail is also a genuinely provocative and talented writer and director, whose Mr. Robot (which concludes with its fourth season early next year) is one of the best shows currently airing. Esmail's take on BSG could be very interesting, although it remains to be seen what he could bring to the table that is genuinely different. Certainly Ronald D. Moore seems intrigued by the idea, and has given Esmail his blessing to develop a fresh take on the franchise.

Battlestar Galactica 3.0 remains in development, but if NBC pull the trigger it will likely be fast-tracked to debut next year.

UPDATE: Sam Esmail has taken to Twitter to confirm that the new show will not be a reboot of Moore's version of the show, but will instead "explore a new story in the mythology whilst remaining true to the spirit of Battlestar. What this means precisely remains to be seen, but it may be an indication that the new show could be set within the Moore continuity but in a previously unseen time frame, such as the original exodus from Kobol to the Twelve Colonies, or the settling of the Thirteenth Colony. More information as we get it.
Posted by Adam Whitehead at 18:59

But how do we know the reboot one is getting remade? Maybe they're remaking the original instead? Or, maybe it'll be wholly new.

I interpreted Esmails tweet to mean they're basically ignoring Moore's version and going back to the original. Which could make it a radically different show--in particular the idea of antediluvian ancient cultures in space could be really interesting.