News sadly broke this morning that Star Trek actor Aron Eisenberg has passed away at the age of 50. 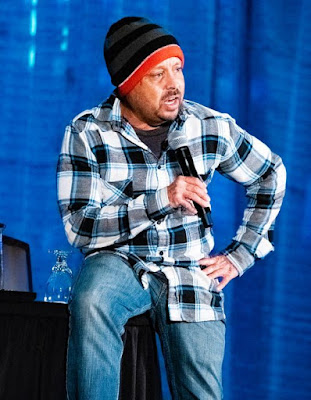 Eisenberg is best-known for playing the role of Nog in 44 episodes of Star Trek: Deep Space Nine, the nephew of Ferengi bar-owner Quark. Nog was originally conceived as a recurring guest character, a foil and trouble-making partner for Jake Sisko (Cirroc Lofton). As the show progressed, the writers took delight in exploiting Eisenberg's excellent comedic timing and also his more dramatic side, turning Nog from comic relief into a more serious character. In Season 3 the character expressed a desire to join Starfleet Academy and was accepted (with Captain Sisko's recommendation. Despite Eisenberg's fears he might be written out of the show, he returned several times in Season 4 as part of a subplot about an attempted coup on Earth by Starfleet officers rendered paranoid by fear of the changelings. Nog was stationed back on DS9 in Season 5. The show's final two seasons he appeared more frequently (appearing in half the episodes of both seasons) as a bridge officer on the USS Defiant.

In the Season 7 episode, the DS9 writers broke an unofficial Star Trek rule that had been in place since the third season of The Next Generation, that each episode had to revolve around at least one (if not several) of the named, regular actors whose names were in the lead credits. In the episode It's Only a Paper Moon, Nog, having lost his leg in battle, retreats into a fantasy world on the holosuite a as a coping mechanism and has to be helped through the trauma by hologram Vic Fontaine (another recurring character played by veteran Hollywood star James Darren). The studio were highly dubious of letting an episode ride almost entirely on two recurring guest stars, but the producers did it anyway, resulting in one of the most critically-acclaimed episodes of the series. Eisenberg was praised for his performance in a difficult and very atypical Nog storyline.

Eisenberg continued to act on stage and on screen, and also worked as a stage director. He also returned to Star Trek in the role of Karden in one episode of Star Trek: Voyager. One of his loves was photography, which he made a living from and also exhibited his work several times. With renewed interest in Deep Space Nine in the 2010s, when the show had cemented its critical reputation as the finest Star Trek show, Eisenberg starred with Lofton and several other DS9 actors on the 7th Rule podcast. He also played a role in the DS9 documentary What We Left Behind.

Eisenberg was born with only one kidney, partially functioning, which was cited as a reason for his short height (Eisenberg was 5 feet tall). At the age of 15, he underwent a kidney transplant and at the age of 46 had a second transplant.

Eisenberg is survived by his wife and two children. He had a reputation as a kind man, always laughing and willing to talk to fans, and was popular with his co-stars. He will be missed.
Posted by Adam Whitehead at 12:43