Head of Marvel Studios to develop a STAR WARS movie

Kevin Feige, the head of Marvel Studios and creative directory of the Marvel Cinematic Universe, is to collaborate with the team at Lucasfilm on a new Star Wars movie. 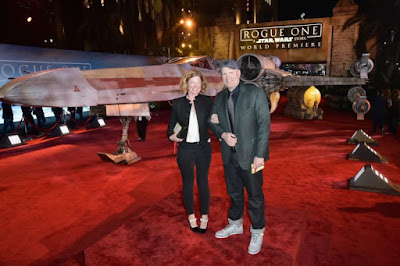 The news is surprising because Feige has a pretty busy slate on his hands, with numerous films and TV shows in development in the MCU. However, Feige is also a huge Star Wars fan and with an opening in his schedule (presumably related to the Sony/Marvel Spider-Man break-up), it appears he wants to help out the Lucasfilm team with their slate of upcoming TV shows and films.

There's no word yet on the nature of the project, although at the moment it sounds like a single film and that it will be part of the "new era" of Star Wars films set to follow the release of The Rise of Skywalker in December, which will conclude the story of Rey, Kylo Ren, Poe Dameron and Finn that began with The Force Awakens in 2015. The film will also reportedly end the nine-part, "trilogy of trilogies" extending back to the release of the original Star Wars in 1977.

Disney's handling of the Star Wars franchise has had mixed results, with a well-received TV show (Rebels) and movie (The Force Awakens) followed by The Last Jedi, which had very mixed results, and the animated show Resistance, which has been cancelled after just two seasons and poor reviews. Of the spin-off films, Rogue One did very well but Solo became the first-ever Star Wars film to lose money at the box office, despite a positive critical reception.

These results have led to Lucasfilm delaying the release of the next Star Wars film (after Rise) to 2022. Former Game of Thrones showrunners David Benioff and D.B. Weiss are developing a multi-film series, whilst The Last Jedi director Rian Johnson is committed to a trilogy of films. Both series are apparently set in a new period of time and a part of the galaxy distinct from previous worlds. Rumours persist that the new wave of Star Wars films - presumably including Feige's - will be set in the Knights of the Old Republic time period, but this remains unconfirmed.

The next Star Wars project to hit the screens will the franchise's first-ever live-action TV show, The Mandalorian, which will help launch the Disney+ streaming service on 12 November this year. Star Wars: The Rise of Skywalker hits cinemas on 20 December.
Posted by Adam Whitehead at 19:24