CBS All Access has cast Alexander Skarsgård in the villainous role of Randall Flagg in Stephen King's The Stand. 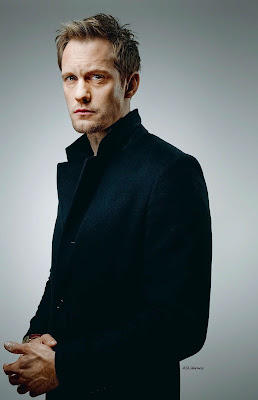 One of the most iconic villains in all of horror, the supernatural Flagg arises from the chaos of the apocalypse to unleash a time of evil, savagery and darkness upon the world. He is opposed by the virtuous Mother Abigail, who assembles a band of mild-mannered heroes to fight him. Flagg is defeated in The Stand but not destroyed, and goes on to appear in several of King's other novels, including The Eyes of the Dragon and, as the "the man in black," the seven-volume Dark Tower series, where he serves as the primary antagonist.

Flagg was previously played by Jamey Sheridan in the 1994 TV mini-series version of The Stand and by Matthew McConaughey in the unsuccessful 2017 movie version of The Dark Tower.

Skarsgård is best-known for playing the role of morally ambiguous vampire Eric Northman on HBO's True Blood. He has also starred in HBO's Generation Kill and Big Little Lies, for which he won an Emmy Award.

The new version of The Stand will adapt the book across 10 episodes. It also stars James Marsden as Stu Redman, Amber Heard as Nadine Cross, Odessa Young as Frannie Goldsmith, Henry Zaga as Nick Andros, Whoopi Goldberg as Mother Abigail, Jovan Adepo as Larry Underwood, Owen Teague as Harold Lauder, Brad William Henke as Tom Cullen and Daniel Sunjata as Cobb. It starts shooting imminently and will air in late 2020.
Posted by Adam Whitehead at 17:48

Hey Wert, big fan of your blog!
You might consider adding some sort of spoiler as you give away Flagg's fate in The Stand.