The First Order has conquered much of the galaxy, but the Resistance is continuing to be a thorn in its side. As Supreme Leader Kylo Ren continues his search for Rey, he is contacted by a most unexpected source: Emperor Palpatine, mysteriously returned from the dead in the Unknown Regions of the galaxy with a powerful new weapon he will gift to the Order, in return for their help. The stage is set for a final showdown between the Light and the Dark Side, the Sith and the Jedi. Until the next one. 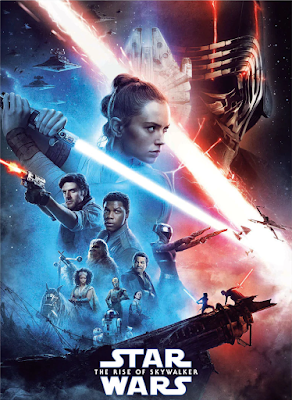 The Rise of Skywalker concludes the Star Wars sequel trilogy, an exercise in film-making where one writer-director gets to write the opening movie a trilogy, another one gets to trash it and do something completely different, and then the original writer-director comes back and trashes what the second one did but can't do his original plan (because it's been trashed) so says screw it and just turns in a greatest hits compilation. The Rise of Skywalker is fanservice turned into nothing less than avant-garde performance art, an unrelenting assault on the senses where it feels like the director spends two and a half hours playing you sound effects and video clips of the previous ten Star Wars movies and yelling "Remember that this was cool when you were twelve?"

We'll skip over the main storyline, which is a mostly forgettable travelogue of unoriginal new planets, including the 476th desert planet to appear in the franchise, in search of increasingly forgettable maguffins (a magic dagger, a droid memory decoder and a magic pyramid thing) and meeting almost completely pointless new characters. Richard E. Grant, Naomi Ackie and Keri Windsor are all great but have maybe 15 minutes of screen time combined. Palpatine - a screen-chewing Ian McDiarmid on fine form - has maybe less.

Instead the focus is firmly on our new friends: John Boyega, Oscar Isaac, Daisy Ridley and Adam Driver, with an even tighter focus on Ridley and Driver. The Rey-Kylo Ren relationship drives this entire trilogy and is the best thing about it, and it's especially the best thing about The Rise of Skywalker. The ambiguity of their relationship, Rey's pull towards the Dark Side and Kylo Ren's pull towards the Light Side makes this all quite tense and interesting in a way that Lucas never quite managed with either previous trilogy (since we already knew how Anakin was going to go and we never really thought that Luke was going to go bad). This thread gives the movie a spine to hang onto even when the overload of plot coupons, laser fights, fake-out deaths and lucky escapes get out of hand elsewhere. Expect a "Reylo Cut" of their relationship to emerge after the final film comes out on physical media which strips away a lot of the distracting frippery.

That distracting frippery gets very distracting as the movie builds towards its bombastic but - as with so much of this trilogy - strangely weightless climax. There's no real worldbuilding depth to this trilogy, with ships continue to be able to jump in and out of hyperspace directly from planetary atmospheres, and almost from planetary surfaces (ignoring the first six films which established you couldn't do that). The movie does bizarrely retcon the hyperspace ram from The Last Jedi, revealing it's not actually possible and they're not sure how it was done. This is probably the most overt of several decidedly juvenile, snide digs Abrams gets in at his predecessor film which feels both infantile and also hubristic; The Last Jedi had a lot of issues of its own, but it is also a more coherent, original film than The Rise of Skywalker.

The final thirty minutes of the film play like The Return of the King's five endings but on crack, with so much fanservice hurled at the audience that it is physically exhausting. Almost every single spaceship that's ever been in a Star Wars film or TV show turns up. Tons of characters from all three trilogies get cameos (some so short that you wonder why they bothered), and they even live-action canonise (albeit only through audio clips) several characters from the Clone Wars and Rebels TV shows. Fan-favourite musical cues from across the series are weaponised with merciless efficiency by John Williams on autopilot, who in lieu of new material seems to have merely hit "shuffle" on his Star Wars Greatest Hits playlist and handed it over to Abrams. The very end of the film goes full overload in burying the audience with cheese. It's not totally ineffective - it turns out that a sunset shot and John Williams' stirring theme still can't get old after forty-two years - but it feels a bit obvious and a bit safe.

The Rise of Skywalker (***) puts all of its dramatic heavy lifting on the shoulders of Adam Driver and Daisey Ridley's shoulders and they pull it off with aplomb, giving the film and the trilogy a dramatic spine which is really fascinating and well-played, when the movie remembers to focus on it. The rest of the time the move is an unrelenting popcorn rollercoaster ride which never stops moving and never stops hurling references to the previous movies at the viewer. On a base level that's fun, but those hoping for some new twists on the classic formula will leave disappointed.

The Rise of Skywalker is on general release worldwide.
Posted by Adam Whitehead at 23:00

Couldnt have said it any better!

I very much agree to your diagnosis of the trilogy suffering from changing directors and, literally, direction. The reference overload seems to be a thing Abrams can't let go of, I always assumed it mostly happens when he collaborates with Kurtzman and Orci. This time it really started to stink. The whole trilogy was suffering from that. They did recycle old and well received storylines with minor variations, giving references, adding something new. The Last Jedi space battles felt like the never shown story "how the Rebels ended up on Hoth before The Empires Strikes Back". What I find the worst is that this is not setting the stage for more Star Wars, the franchise is not going to end, but what will the future bring? It might be pretty bold to claim Abrams isn't the right man for that, but what Jon Favreau did with The Mandalorian and Gareth Edwards with Rogue One, that's so much better. I am rewatching the Star Wars movies for a while right now and The Mandalorian makes me feel like a happy kid again. It's meant for a younger audience, but it also excites an aging fan like me.

I think the entire sequel trilogy (Episode VII - IX) is one giant missed opportunity. The trilogy as a whole just didn't have the same cohesion as the other two trilogies. I mean, the original director of Episode IX dropped out because of what happened to Luke and Snoke in Episode VIII: he had plans for those guys! If it was all plotted out, that wouldn't have been an issue.

Also, sure, Lucas had outlines for VII - IX (and even X - XII, depending the year/news story) but Disney did not use his initial ideas or drafts.

I wanted to enjoy Episode VII and Episode VIII, and they have def have their 'popcorn moments' (I'll see Episode IX once it arrives on Disney+) but the sequel trilogy has just fallen flat.

For the record, I enjoy the original trilogy (only the original edits, nothing past 1997 in regards to the OT), The Clone Wars, Rebels, and The Mandolorian.