Three years have passed since Avatar Korra defeated Zaheer and the Red Lotus, but in the process sustained terrible injuries to both her body and spirit. The world has moved on in the interim, with a general named Kuvira having united much of the Earth Kingdom which fell into civil war upon the death of the previous Earth Queen. When the new Earth King claims his throne, Kuvira rejects him and declares herself the ruler of a new Earth Empire...with its sights firmly set on Republic City. 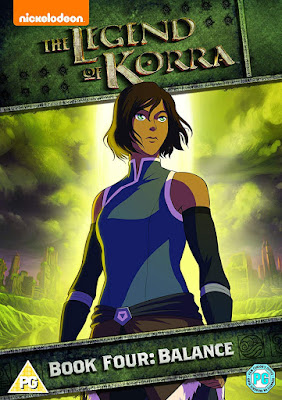 The third season of The Legend of Korra was a welcome return to form after the disappointing and messy second. It did end with an extremely brutal confrontation between the Red Lotus and Korra, one which it felt like couldn't be brushed under the carpet so her heroes could immediately get into fresh adventures, and it's therefore a relief that Season 4 devotes its opening episodes to showing the passing of time, confirming that Korra has been struggling to recover from her experiences and that the world hasn't been sitting around waiting for the Avatar to return.

Season 4's drama centres firmly on Kuvira, the "Great Uniter" who has restored peace to the Earth Kingdom have years of internal conflict brought about when the Red Lotus killed the Earth Queen in Season 3. Kuvira is understandably annoyed at having to hand power over to the Queen's nephew, a vain and arrogant fop, purely on the grounds of his bloodline and, apparently supported by most of the Earth Kingdom's population, declares herself its new ruler. The show could have presented an more interesting moral dilemma by showing Kuvira as trying to be a more responsible ruler only to fall into the traps of authoritarianism and despotism more gradually, but the opening episode confirms that she is prepared to use brutal techniques in the pursuit of her own personal power, so this kind of nuance is lost. Going in the opposite direction does mean that it's less plausible that she would be supported by Bolin and Varrick, who spend several episodes in her camp before recognising her true colours.

The show also demonstrates how the good guys have become a much more capable force even in Korra's absence: Asami has rescued her company and developed lots of exciting new technology and gadgets and the new Airbenders have become a strong factor in restoring balance to the world. Their efficiency makes Korra feel even more redundant, leading to her going AWOL and joining the underground pro-bending cage fight scene. Early episodes feature Korra feeling sorry for herself before pulling herself together to confront the new threat, but the show is surprisingly realistic in addressing Korra's PTSD and show that the recovery process is long, gruelling and prone to reversals even after positive steps are taken.

The final season of Korra only features 12 episodes - a 13th is a flashback episode mandated by a hefty budget cut late in development - and perhaps doesn't quite have enough time to do these ideas justice. The return appearance of Avatar fan favourite Toph (and her first meeting with her spiritual descendant in the new series, a now-older Meelo) is very welcome and the further development of new magical forms like lavabending is cool, but it feels like the season is trying to do a bit more than it can pull off in the time available, especially when an utterly gigantic war-mecha rather out of keeping with anything we've seen previously in the show turns up without any warning.

Still, if the final season of The Legend of Korra does try to do much, it at least keeps the show busy and moving at a very fast clip. As it stands, the final season is highly entertaining but also features a surprisingly mature look at adult issues like stress, breakdowns and recovery. Action-packed and well-written, the final season of The Legend of Korra (****) ends the show and the entire franchise (at least for now) in fine form. The season is available now as part of the complete series box set (UK, USA) and on Amazon Prime worldwide.
Posted by Adam Whitehead at 13:11