Korra, the new Avatar, has saved Republic City from the evil Amon. A new problem arises when dark spirits start attacking ships belonging to the Southern Water Tribe and Unalaq, the leader of the Northern Water Tribe, declares that the south has lost its spiritual identity. When the Northern Tribe annexes the south, Korra is placed in a difficult situation. 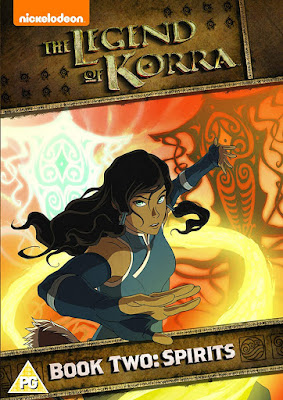 The three seasons of Avatar: The Last Airbender constitute one of the finest epic fantasy narratives of all time, and the first season of The Legend of Korra was a fine spin-off which went in a different direction with story and atmosphere whilst remaining part of the same world. The second season of Korra delves into more familiar Avatar material, such as the Water Tribes, the Spirit World and the Great Library, as well as establishing more backstory and lore. It's also, unfortunately, a messy and unfocused season which gets very silly at times.

Things start promisingly with the split in the Water Tribes risking civil war, with Korra's parents caught up in the conflict. This gives us recognisable stakes and an emotional connection to the storyline. However, Unalaq is too obviously a villain and Korra's decision to trust him even after he invades the Southern Tribe is implausible. It also doesn't help that in character and even design, Unalaq almost confusingly resembles the similar character of Tarrlok from Season 1.

The story then shifts from a political struggle to more of a spiritual one, as we learn that the Avatar was created by the merging of the a human with a "spirit of light" ten thousand years ago, and Unalaq plans to release a corresponding "spirit of dark" from its prison and become a "dark Avatar." There's some potential in this storyline but it's not really realised very well. A flashback episode to the creation of the first Avatar is well-realised, with a different art style to the rest of the series, but there are major lore contradictions to the established backstory (remarkable enough that even Avatar uber-fan and occasional voice actor Serena Williams complained about it). The visual design of the two spirits - as sort of flapping things that look like flags or something - is also fairly risible. At the end of the season there's a huge battle between the two Avatars which I think is trying to be a homage to Japanese anime tropes but instead looks ridiculous. The ending also doesn't really make much sense (given that the spirit of light is reborn out of the darkness five minutes after its apprent defeat, it's unclear how defeating the spirit of dark doesn't cause the same thing to happen to it).

There's also the odd decision to make the inhabitants of the Spirit World look like fluffy cuddly Pokemon and have them flip from being good or evil based on who's in the vicinity, which again feels out of keeping with Avatar, which established the spirits as being much more vague and mysterious. This season over-explains the Spirit World to the point where it loses any ambiguity and thus becomes less interesting.

Elsewhere things are better. Bolin has an amusing relationship with the psychopathic Eska (magnificently voiced by Aubrey Plaza) and new character Varrick, an eccentric billionaire industrialist, is entertaining. Tenzin's children get more to do, particularly Jinora, and the introduction of Tenzin's siblings Bumi and Kya allows the writers to explore some interesting family drama and dynamics. Something Korra does very well is show that our heroes from Avatar continued to have interesting lives after defeating the Fire Lord, sometimes with major downs and reversals, but ultimately coming through. In the middle of an otherwise weak season, it is a reminder that there are more interesting stories in this world that could be explored.

The second season of The Legend of Korra (***) is watchable with some solid character development and good subplots, but in terms of structurally and pacing it's a mess, and the main story is confusing, contradictory and grandiose but without much depth. Easily the weakest season of the Avatar/Korra franchise, things thankfully improve markedly in the following season. The season is available now as part of the complete series box set (UK, USA) and on Amazon Prime worldwide.
Posted by Adam Whitehead at 09:45