The Legend of Korra - Book I: Air

The Hundred Year War ended when Avatar Aang defeated the Fire Lord Ozai and brought peace to the Four Nations. Aang and Katara's son, Zuko, founded the United Republic of Nations where people from all over the world could live together in peace. Its capital, Republic City, became a beacon of hope and integration for all of humanity. 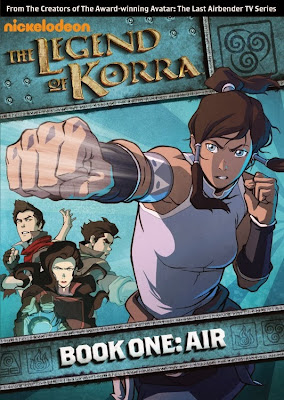 Seventy years on from the end of the war, Korra, the new Avatar, arrives in Republic City to begin learning the art of airbending from Tenzin, Aang and Katara's son. Born and raised in the Southern Water Tribe, Korra is initially overwhelmed by the bright lights and perceived glamour of the city. But there are inequalities and simmering tensions in the city, stoked by the enigmatic Amon who desires a world where magic-benders no longer exist. When he reveals that he has the power to strip a person's abilities from them, he becomes the biggest threat the city has ever seen...a threat that only the Avatar can defeat.

The Legend of Korra is the sequel series to Avatar: The Last Airbender, arguably the greatest slice of western animation of the past twenty years. The task of crafting a sequel to such a beloved show was daunting, but the producers have risen to the occasion by doing the only thing they could: take the sequel in a very different direction from the original series.

Whilst Avatar was more of a traditional adventure story featuring Aang and his adventures travelling from place to place, Korra is much more locked into the location of Republic City. Heavily influenced by both New York and Shanghai in the 1920s, Republic City takes influences from history, retrofuturism and steampunk. It's a towering collection of skyscrapers, sporting arenas, industrial parks and cars (sorry, 'Satomobiles') where fortunes can be made and lost overnight. It's clearly the same world as seen in Avatar, but the technology we saw beginning to develop in that series (such as airships and steam vessels) has moved forwards dramatically. The show makes use of these stylings in various ways, from the 1920s-influenced soundtrack to the cinema news reel which plays at the start of each episode and acts as a recap of the story so far.  Moving away from the setting of the original series was a clever idea and provides not just a great backdrop for the new series, but also (via flashback) brief opportunities to see the later adventures of Aang and his friends as they built up this society from scratch.

The setting is beautifully-depicted, but characterisation is a more mixed bag. Korra is a sympathetic and winning heroine, even if she does settle into the 'brash and headstrong teenager' trope a little too easily. Mako and Bolin, the pro-bending brothers who become Korra's key allies, are more standard archetypes: the square-jawed hero and his wise-cracking sidekick. The non-bending member of the 'new Team Avatar', Asami Sato, may be the most interesting character of the bunch but she gets relatively little development compared to the others. The supporting cast is better-handled. Tenzin is a stoic, serious man clearly overburdened by the weight of his late father's expectations but who opens up a little to Korra. His kids are played for comic relief, but provide quite a few excellent laughs as the series progresses. Another key supporting character is Lin Beifong, Toph's daughter and the city's chief of police, who starts off being thoroughly unlikable but grows into a more relatable character over the course of the season. The enigmatic Amon, with his smoothly threatening voice and blank-faced mask, is also an effective villain. 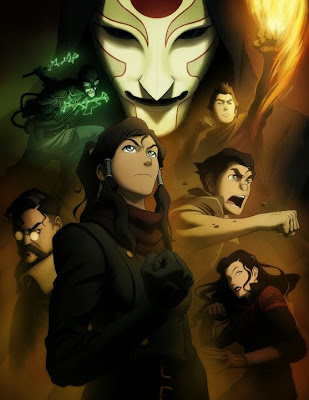 As with Avatar, the show can be watched and enjoyed by kids and adults on different levels. Kids will likely respond to the action-focused storylines and cute animal characters, whilst adults will likely appreciate the allusions (and even satire) to our own history and society. The inequalities in the setting, based on both the growth of capitalism and the fact that benders are almost able always to get jobs whilst non-benders suffer (fuelling Amon's revolution), are tackled head-on in a surprisingly mature way for a kid's show. However, the socio-economic tensions emerge organically from the setting and its development from the original series rather then being developed too incongruously. This extends to magic as well, with the new forms of bending discovered towards the end of the original show (metalbending and energybending) both playing key new roles in this series and being developed logically.

The show suffers a little from being restricted to just 12 episodes in its first season (compared to Avatar's 20 episodes per season). Story arcs that the viewer might have expected to last a bit longer are compressed into just an episode or two, and sometimes the pacing feels off. This lack of time also means that some elements - such as the size of Amon's forces and the firepower available to it - feel a little unconvincing. More damaging is the decision to base the season's main emotional arc around a love triangle between Mako, Asami and Korra. With more time to develop, this could have made for a more effective background element (much as how romance was handled in the original series), but here it's much more front-and-centre and dominates two episodes to their detriment. The limited screentime also means some characters (like General Iroh, Zuko's grandson who amusingly shares his grandfather's voice actor) aren't really fleshed out at all and just show up, do some stuff and disappear without much being learned about them.

Still, the flipside of the fewer episodes means that there's less hanging about and each episode feels busier, developing multiple storylines in tandem as well as building up the setting and the backdrop. It could all have exploded into an incoherent mess, but the writers manage the chaos quite well.

Despite some flaws, The Legend of Korra - Book I: Air (****) is a worthy follow-up to Avatar: The Last Airbender. It tries to be different whilst also exploring the consequences of the preceding series and manages to pull both off. The characters aren't quite a match for their predecessors, but this remains a highly watchable and engaging animated series. It is available now on DVD (UK, USA) and Blu-Ray (UK, USA). Book II: Spirit will be released in 2014.
Posted by Adam Whitehead at 19:33

I wasn’t sold on Book One of Korra. But Book Two hooked me again, after ATLA. The writing in Book One felt subpar, but in Book Two it was back on top. I think I’d say the writers didn’t quite follow through with the shift from the mythological and epic to the political and social themes (Amon’s revolution seems justified, but it’s never questioned that it must be quelled – the tension between a just cause and a corrupt leader seems underdeveloped to me). So, I think it’s a good thing they’re back to the former, with the latter still playing an important part.