Following previous rumours, Telltale Games have confirmed that they will be releasing a Game of Thrones episodic adventure game in 2014.

Telltale, formed out of the collapse of LucasArts's adventure game division in the early 2000s, are the critically-acclaimed creators of Tales of Monkey Island, The Walking Dead (the best piece of media set in that universe to date) and their current ongoing release, The Wolf Among Us, as well as three well-received Sam and Max games. Their other games, of varying quality, include titles set in the Law and Order, CSI, Wallace and Gromit, Jurassic Park and Back to the Future franchises. Telltale have also announced another new game, Tales from the Borderlands, set in the Borderlands video game universe.

This is promising news. With both The Walking Dead and The Wolf Among Us, Telltale have gained a reputation for well-written stories with exciting twists and unusually good characterisation. These are all things that will apply well to the Game of Thrones setting. No word on story or character yet, although Telltale usually prefer to use new characters in a setting where there is ongoing material. They are hoping to use some of the TV voice cast, so some locations and characters may overlap, but I suspect this will be mostly a new story.

"There are sex scenes on the show?" - Kevin Bruner, Telltale Games

According to Telltale there will be some sword-swinging and action, but this will not make up a lot of the gameplay. They were coyer on whether the show's sex scenes would make the translation to gaming. 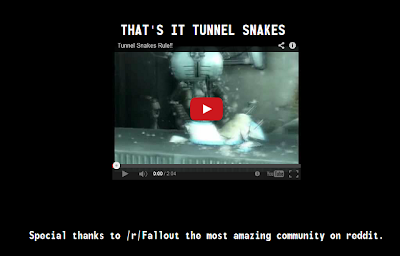 Unfortunately, the promising ARG for Fallout 4 has been exposed as a hoax. Whilst Bethesda are still widely believed to be working on the game, it does not look like any formal announcement is imminent. Bethesda have faced some criticism from fans for not exposing the story as a hoax when it first appeared a month ago.
Posted by Adam Whitehead at 12:20