King of Thorns by Mark Lawrence

Jorg of Ancrath has seized the throne of Renar and now rules the Highlands as a king and a sworn enemy to his father. When one of his companions is consumed by fire magic, Jorg resolves to take him across the Broken Empire to a distant volcano where he might find help. But this is the beginning of a longer journey across the continent as Jorg seeks new allies to stand against another king who may be able to unite the Empire...a king more noble and honourable than Jorg. 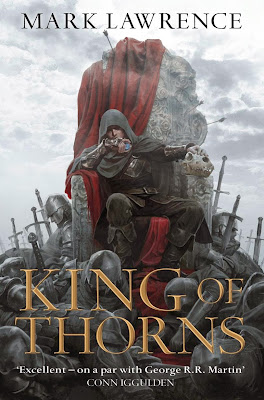 King of Thorns is the middle volume of The Broken Empire trilogy and the sequel to 2011's Prince of Thorns. Like its predecessor, it is an at-times uneasy and bleak read but also one that is interesting, broodingly atmospheric and fairly well-written.

As with before, the focus is on Jorg and his band of not-so-merry cutthroats and pillagers. The events of Prince of Thorns have, if not mellowed Jorg, than certainly caused him to re-appraise his life. The result is a less amoral and ruthless Jorg than before and one who is more introspective. Whilst there's still plenty of mayhem in the book, Jorg is less likely to cause it (at least not without more convincing need than before).

The book is structured as two narratives unfolding simultaneously: a flashback set four years in the past (picking up just after the end of Prince of Thorns) and a present-day storyline focused on a massive battle as Jorg's kingdom comes under attack. This structure is the book's biggest weakness: the battle takes place over a short period of time but the flashbacks are much longer and dozens of pages pass between each present-day interlude. Each interlude also relies on events from the flashback to make sense, meaning that we are in the dark about Jorg's plans until he reveals a new weapon, tactic or group of allies that was explored in the preceding flashback sequence. The structure means that the battle feels like a sequence of amazing coincidences and turns of fate which have only just been set up a few pages earlier (so whilst not technically a series of deus ex machina, they do feel a bit like them). What would have worked better (and fortunately the book can be read this way) is if the flashbacks had been one continuous narrative, followed by the present-day storyline taking all of the revelations from the flashbacks and letting them unfold in one go.

Moving beyond that issue, King of Thorns is mostly a success: the characterisation is stronger, the prose is better and the book is more nuanced than its predecessor in terms of morality and consequences. There are also some outstanding sequences, such as a creepy encounter with the undead in a swamp and what appears to be a typical heroic quest which goes rather badly wrong at the end. The book asks some hard questions about rulership and ambition, but on occasion the novel feels like a retreat from Prince of Thorns's hard-edged ruthlessness. A key conflict in the novel is that Jorg's enemy is, in many ways (well, almost all ways), a better man than Jorg and Jorg himself wonders if he should be opposing him or become allied to him. This conflict is all-too-neatly undone by a plot twist revealed quite late in the novel that confirms if this other force wins, the consequences will be horrendous. This feels like the author giving his character too easy of an 'out' of his moral dilemma. The novel also handles its main female character, Katherine, rather oddly. After giving her quite a lot of development through the book (her letters are the only part of the novel not from Jorg's POV, giving her an interesting perspective on events) she vanishes in a rather confused and muddled way in the finale. Hopefully this will be clarified in the final novel in the series.

King of Thorns (****) is a highly intriguing novel, though it can be bleak and hard-going. The structure is problematic and some character arcs are better-handled than others. Those who had a hard time time believing that a 14-year-old could do all the things he did in Prince of Thorns won't find much more plausibility here (though Lawrence amusingly subverts Jorg's occasionally-threatened Gary Stuness several times). However, the novel is also well-written with some excellent turns of phrase and features some memorable setpiece moments. The overall direction of the series remains compelling, even if this is a slight step back from Prince of Thorns in quality. The novel is available now in the UK and USA.
Posted by Adam Whitehead at 10:02

Email ThisBlogThis!Share to TwitterShare to FacebookShare to Pinterest
Labels: king of thorns, mark lawrence, prince of thorns, the broken empire