2027. Millions of people across the world are enjoying unprecedented good health thanks to a genetically-engineered tapeworm designed by the SymboGen Corporation. One of the poster children for the treatment is Sally Mitchell, put into a coma by a near-fatal car crash but whose tapeworm repairs the damage and allows her to live again. Six years on from her accident Mitchell has made an almost-full recovery, but is at the centre of events when other people with the Intestinal Bodyguard start behaving very oddly indeed. 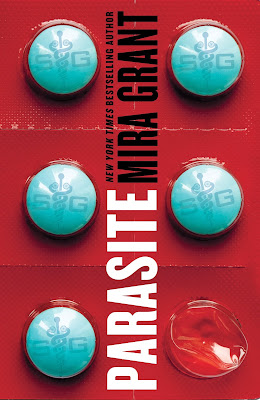 Mira Grant is a pseudonym of SF writer Seanan McGuire, winner of the 2010 John W. Campbell Award for Best New Writer. As Grant, McGuire has published the zombie-based Newsflesh trilogy as well as a series of urban fantasies under her own name. Parasite is the first novel in a new series called Parasitology, which is important to know going in: the book doesn't actually climax but instead is cut off almost in mid-flow as soon as an appropriate cliffhanger is reached; those looking for a complete novel best look elsewhere.

The book is told almost entirely from the POV of Sally Mitchell. Since her life was apparently saved by the SymboGen Intestinal Bodyguard, she has contacts that allows her to observe the growing crisis from both inside the company and outside. This is rather handy, since it means she has a clearer idea of what is going on than almost anyone else in the world, but it also negates one of the points of having a limited POV in the first place: that they only have part of the puzzle and must work out the rest themselves. Since Sally is on top of everything from the off, this limitation does not apply and indeed makes for a curious structural choice, as it lessens tension from the narrative.

In terms of prose, Parasite is acceptable and probably a bit above average for this sort of biological thriller. In particular, McGuire does a good job of nailing the different voices of the feuding scientists whose biography extracts open every chapter. This doesn't extend too well to the dialogue, which often feels clunky and falls into the cheap Lost trap of having characters not ask the blindingly obvious questions and as a result delaying the delivery of vital information to the reader for quite some time. It also doesn't help that Sally is a bit of a blank character, a recovering amnesiac who appears to be extremely rational but also a bit on the slow side: almost every major plot twist (including the Shyamalan-class example at the end) is so heavily foreshadowed that even less-than-careful readers will likely predict most of the things that are going to happen chapters (or in the case of the big one, three-quarters of the book) ahead of time.

Beyond Sally, most of the characters are uninteresting; I spent most of the novel more worried about the fate of Sally's newly-rescued dog than any of the other humans. I also found the fall-back on zombies to be tedious, especially from an author who's already written a major zombie trilogy. It may turn out that the 'sleepwalkers' are rather different to traditional zombies (and there are hints to this effect), but for most of the book they are employed in a similar enough manner to make such differences moot.

Despite predictable plot twists, clunky dialogue and dull characters, the book moves with a fair bit of pace and McGuire is pretty good at action sequences and occasional moments of suspense. These prevent the book from bogging down in its numerous flaws. The book also has a big ask of its readers: the revelation of what is actually going on is so utterly implausible - especially given the robust science the author employs up to that point - that it will likely cause many to throw it down in disgust whilst others swallow it down and press on (also known as the 'Night's Dawn Trilogy Effect').

I found myself vaguely enjoying Parasite (***) despite it having a huge number of flaws. Ultimately, McGuire is an effective thriller writer and keeps the action and suspense beats coming at enough of a clip that it maintains just about maintains interest even over the problems with dialogue, characterisation, predictability and plausibility. The novel is available now in the UK and USA.
Posted by Adam Whitehead at 15:34