Entertainment Weekly have the first interview with the producers of Orphan Black, John Fawcett and Graeme Manson, and the first official publicity photo from the first episode of Season 2. 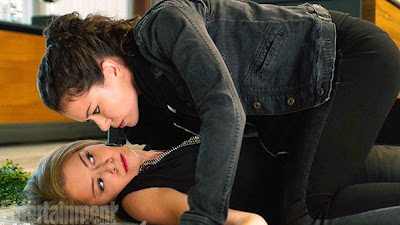 If you've seen the Season 1 finale, you may have an inkling of why Sarah might be a 'little vexed' at her clone.

We're still four months from transmission, but it's good to see BBC America and SPACE are publicising the show well ahead of time (for comparison, we're closer to the start of Season 4 of Game of Thrones, and almost no material at all has been released for that).
Posted by Adam Whitehead at 14:10

Pity that the trailer re-emphasised the most ridiculous cliffhanger in the show (the thing about *SPOIIIILERRRRR* the clones being "owned" by the company and that being hidden in their DNA - never mind that this makes no sense at all from a legal point of view)./SPOILER

I really enjoyed the first season, but some things toward the end made me worry about the show's future - the layersofshadowyconspiracy element just looks too.... Heroesy?.... for me.