The Mountains of Mourning by Lois McMaster Bujold

Miles Vorkosigan, home on leave from the Barrayar Academy, is given a job by his father: to adjudicate a case of infanticide in a farming community. Aral Vorkosigan has pioneered laws designed to protect ill and deformed young babies from being killed out of hand, as has been the custom for centuries, and wants to see the law enforced. Miles reluctantly heads for the village...only to find a seething morass of secrets and local intrigue which makes finding the real killer more difficult than he thought possible. 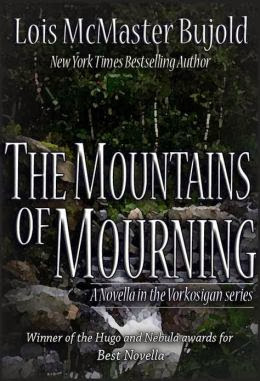 The Mountains of Mourning is a short (80 page or so) novella set in Lois McMaster Bujold's Vorkosgian universe. It's a slight work but an interesting one, showing the changing face of Barrayar society due to the reforms introduced by Aral Vorkosigan after the events of Shards of Honour and Barrayar, the first two novels in the sequence.

The writing is pretty good, with Bujold pulling out some interesting twists to overcome the superior technology of Miles's investigating team (who are armed with instant truth drugs). On a character level, it shows Miles growing and taking more responsibility. It's a much more serious story than the previous (chronologically) novel in the series, The Warrior's Apprentice, and Bujold handles the change in tone quite well. Bujold also does reasonably well to avoid the worst cliches of the 'high-minded folk from the city telling the country bumpkins what to do' trope, with the villagers turning out to be smarter and less primitive than they are initially set out to be.

The Mountains of Mourning (****) is a fine novella, but it's not really worthwhile purchasing this as a separate volume. Fortunately it can be found conveniently packaged alongside The Warrior's Apprentice and the succeeding novel, The Vor Game, in the Young Miles omnibus, available now in the UK and USA.
Posted by Adam Whitehead at 10:52

Email ThisBlogThis!Share to TwitterShare to FacebookShare to Pinterest
Labels: lois mcmaster bujold, the mountains of mourning, the vorkosigan saga

I just read this novella and still have it on my nightstand as I moved onto an audio version of the Vor Game and will come back to it later based Bujold's internal chronology. It was a solid addition to the Vorkosigan Saga. In the U.S., you can get them in Borders of Infinity: http://tinyurl.com/owh7w8s

Glad to hear that, I just finished Barrayar and the prequel Falling Free back in November and Young Miles should be arriving on Thursday with some other books I snagged with one of my gift cards.