The Sin of Damnation is a vast space hulk, a conglomeration of wrecked starships fused together by the unholy powers of the Warp. The Blood Angels chapter of the Space Marines has located the ship near their fortress monastery world of Baal and ordered a full-scale assault to cleanse the ship of hostile lifeforms. 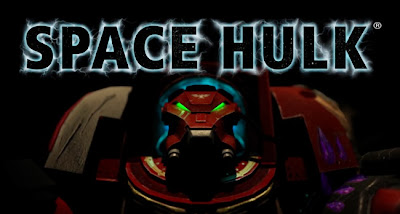 Space Hulk was originally a board game released in 1989 by Games Workshop. Set in their Warhammer 40,000 universe, the game cut out the complexity of the main wargame and presented a focused, straightforward contest: heavily-armed Space Marines versus hordes of ferocious Genestealers on a battered old spacecraft. The game was popular for its steep difficulty level and nailbiting tension. Two video game adaptations followed, Space Hulk in 1993 and Vengeance of the Blood Angels two years later. Using the same setting, these two games were real-time rather than turn-based but were otherwise rock hard.

The latest attempt to adapt the board game is, by contrast, slavishly faithful to the original game. You have a number of Terminator Marines, ranging from 3 to 10 depending on the mission. Each marine has four action points per turn. Turning 90 degrees, taking a step forward, firing a weapon or repairing a jammed gun all take a single action point. Going onto 'Overwatch', which allows your Terminators to fire automatically as enemies come into sight, takes two and is essential. You also have a pool of between one and six command points, which can be distributed across the squad. However, command points need to be used carefully: if your marine's weapon jams whilst on Overwatch during the enemy's turn, only command points can unjam it and allow firing to continue, so make sure you have some left.

The Genestealers don't have ranged weapons, but they are faster than Terminators (able to move six squares a turn) and spawn in large numbers out of air vents. With the exception of a few specialists, the Space Marines suck at close combat: if a genestealer closes to melee, the marine is probably dead. This makes it crucial to set up overlapping fields of fire, cover all the flanks and keep the enemy at a distance. However, the design of the space hulk makes this difficult, with single-spaced corridors, narrow rooms and the Terminators' own bulkiness making it hard to cover all the angles. You also have a number of marines with special weapons: Librarians can use psi-powers to temporarily block off corridors or even slay Genestealers at a distance, but they have a limited pool of psi-energy which will quickly be used up. Flamers can set fire to rooms and send fireballs rolling down corridors, but only have six shots. Assault cannons never jam, have a very high to-hit score and tremendous range, but only have twenty shots per mission and need to be reloaded after ten (which takes four action points).

This relatively small array of different options makes for a surprisingly large number of tactical decisions. Each turn can be an edge-of-the-seat affair as you move marines to block off approaching enemy forces whilst also trying to advance to meet the mission objectives. It's not uncommon to cross half the map, set up a perfect defensive grid and then suffer a massacre as you have to disrupt it to reach the target. There are times when taking the slow and steady path is the way to go, but others when riskily using all of your action and command points in one movement is the only chance to win. In short, Space Hulk replicates the tension of the original game quite well. 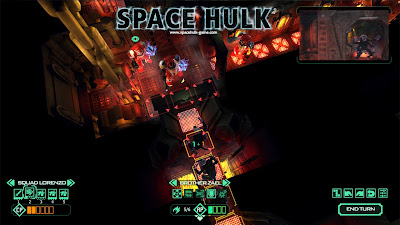 Unfortunately, the adaptation is probably a little bit too slavish to the original. The game is highly dependent on luck, with defeat sometimes happening despite you doing everything to tactical perfection. This is something that works quite well for a group of friends clustered around a board, but in a computer game (where you are going to just reload anyway) feels rather frustrating. There are also gaps in logic which you accept as part of the board game but in the video game seem rather more obvious: why do the Space Marines' bolters jam so frequently? Why do the standard Terminators have infinite bolter ammo but the assault cannon guy and flamer only have a few shots each? How can you only take four shots during a normal turn but on Overwatch might manage twenty? Why do the Terminators wear such crazily huge and bulky armour if they die from just one hit? Why haven't the marines got any extra equipment like melta bombs, grenades or deployable turrets (present in the original board game's brother-title, Space Crusade)? Why do you only get more powerful units like the Librarian on some missions and not on others?

There's also the variety, or rather the lack of it. Whilst the game does a good job of upping the ante and introducing new weapons and units at a steady pace throughout its first half, in its second it seems to get more bogged down in long, frustrating missions where a single mis-rolled die can wipe out the entire squad. Some of the later missions can only be reliably completed by saving-scumming after every turn and reloading multiple times. There's also a distinct lack in mission structure, although the free DLC Messenger of Purgatory does feature some livelier corridor and room designs.

Graphically, the game is functional rather than attractive. Perhaps sensibly, the designers have realised that you're going to spend most of the time zoomed way out to assess the overall tactical situation rather than closely zoomed-in, and have de-emphasised the close-up graphics. However, they then rather oddly deploy an 'action cam' showing close-ups of your units when they fire weapons and engage Genestealers in melee combat. At this close range the Space Marines look blocky and the Genestealers are rather cartoonish. Still, graphics are not the game's key focus. Thankfully, a number of bugs that the game originally shipped with (including clipping through walls and the 'ghosts' of enemy units remaining standing after they've been killed) have either been eliminated altogether or reduced to very rare occurrences, and the release of a three-mission bonus campaign (now included with all copies of the game) helps make up for this early inconvenience. The only remaining bug of note is that the game is not very good at counting how many points an action will cost, and you'll often find yourself saving points by guiding a unit square-by-square and action-by-action rather than leaving the AI to do it.

Overall, Space Hulk (***) can be a tremendous amount of fun, but the time you spend really enjoy playing the game will likely be almost equalled by the times you find yourself frustrated or annoyed by the game's over-reliance on luck. Played in short doses, and certainly purchased at a reasonable cost (certainly don't spend more than £10 on it), it's a reasonably entertaining stopgap of a game.
Posted by Adam Whitehead at 18:20

as an ex-gamer I loved Chaos Gate, great recreation of the tabletop, but far too slow a pace to win in the current market I assume!