In the aftermath of the Battle of New York, SHIELD is putting together a new team led by Agent Phil Coulson...who is supposed to be dead. Recruiting two combat specialists and two scientists, Coulson goes after a hacker working for an activist group, the Rising Tide, and aims to be ready to face a whole host of newly-emerging threats to the security and peace of the world. 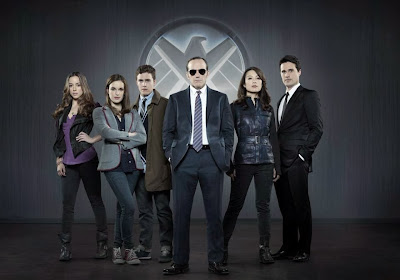 Agents of SHIELD is Marvel and ABC's collaborative TV show set in the Marvel Cinematic Universe, which in English means it is set in the same continuity as movies such as Iron Man, Thor, Captain America and The Avengers. Agent Phil Coulson returns - despite being apparently killed by Loki in the first Avengers film - to assemble a new team of agents to take care of relatively low-level threats whilst the superheroes are dealing with bigger stuff in their own films.

This is a fine idea for a TV show, especially one created (although, crucially, not run) by Joss Whedon, and there was a fair amount of hype in the run-up to the show's launch a few months ago. Despite hugely impressive launch ratings in the USA (which have dropped off somewhat, though not - yet - disastrously), the show has endured a fairly tepid critical reception since its launch. Rumours of rewrites and creative re-jiggling behind the scenes (with rumours of Whedon rewriting scripts whilst he's prepping The Avengers: Age of Ultron) have hinted at a show in some creative trouble.

It'd be fair to say that Agents of SHIELD has not set the world on fire since its launch. The show has varied its tone all over the place and the writing and characterisation has been inconsistent. One problem is that whilst the series may have an impressive budget for network television, it's still not a patch on anything the films can do and as a result the action scenes and superheroics can feel very tepid compared to the movies. Also, the series seems to suffer from an issue where the threats our team are facing can't be too dire, as then SHIELD would simply jump in with helicarriers and Iron Man and Captain America to solve the situation. This results in a show that feels like it's riding around with its training wheels still on. Rather than using and exploring all that the Marvel Universe has to offer, the film instead feels straitjacketed by its mythos. That is definitely not what fans signed on to see.

As a series lead, Clark Gregg works as well as ever as Agent Coulson. He's restrained and stoic, but his deadpan humour and well-judged leadership works well. Ming-Na Wen brings considerable presence to the role of Agent Melinda May. Although she's a walking example of the 'taciturn badass' archetype, May works because the actress brings total commitment to the role. More problematic, at least initially, is Brett Dalton as Agent Grant Ward. Ward is a weapons expert, capable in combat and the show's action hero. In early episodes he's about as interesting as a solid block of wood, but as the series goes on he improves, his rather cliched characteristics become a topic of humour and his ill-advised romance with a colleague allows him to show another side to the character. Dalton also shows some promising comic timing. 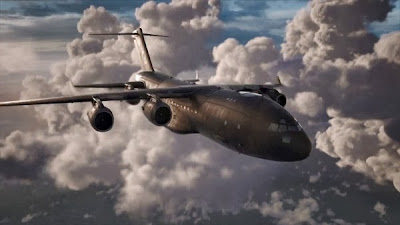 The plane is a high-tech Serenity stand-in, but works as a (easily-infiltrated) mobile base of operations.

Iain De Caestecker and Elizabeth Henstridge as scientists Fitz and Simmons start off as irritating geeks, but fortunately get some much-needed development a few episodes in and become a lot more likable as a result. In fact, the most problematic character is, unfortunately, also our audience-substitute one. There's no denying that Chloe Bennett brings enthusiasm to the role of hacker Skye, but she fails to convince in her portrayal of a supposed computer expert. Her story arc - trying to learn the identity of her parents - is also rather half-baked in these opening episodes. Bennett is at her best when either making quips or showing a vulnerable side, but otherwise seems to be as confused by the constant shifts in the quality of the scripts as the viewers are.

The episodes themselves leap around in quality. 0-8-4, complete with its South American cliched characters, is embarrassing and Girl in the Flower Dress completely fails to evoke much fear or tension when the team go up against a genuine supervillain. The Well is a tie-in to Thor: The Dark World which simply doesn't work. Repairs, The Asset and Eye Spy all show some promise, but the episode FZZT may be the stand-out so far. This isn't due to its premise (which is ropey) or denouncement (which is unconvincing) but simply because the episode focuses on the dynamics of the team and how they work together and does so more convincingly than any episode before. The pilot and mid-season finale The Bridge also feature J. August Richards (a regular from a previous Whedon show, Angel) as a would-be superhero whom the team initially fights against and later joins forces with. Richards's presence and charisma gives an immense lift to the show and should really have been a regular all along.

Still, despite some problems the show generally (if erratically) gains more in confidence and quality as it goes along. Ten episodes in, by the mid-season finale, there's at least several ongoing storylines gaining traction, the characters are better-defined and the show as a whole seems to be getting more of a sense of direction and purpose. It's all still taking a lot longer to work than it should, and it's rather dismaying that the super-spy heroics are often less convincing than the same things on comedy-drama Chuck (which is starting to look like some kind of weird trans-temporal piss-take of Agents of SHIELD), but the show has at least managed to elevate itself from the 'total write-off' stage.

Agents of Shield's first half-season (***) is moderately entertaining, despite having enough teething troubles to write a book about. There is a huge amount of unfulfilled potential here. If the show can start delivering more regularly, it might become something more worthwhile. The remainder of the season starts airing on 7 January in the United States.
Posted by Adam Whitehead at 21:08

I agree with your assesment, but I've become fond of several of the characters and hope things continue to improve.

Also, I like the intriguing mystery of what actually happened to agent Coulson. I've been thinking from the beginning that things were more than they seemed after his "death", and it looks like I'm right. Tahiti...a magical place!

A lot of hyped shows were disappointing this year.
You should check/review Peaky Blinders.Top class acting and directing in an overall unique style.It's Boardwalk Empire in "British way"..

I choose to see the glass as half full. The premiere was mind-blowingly good, then the early season was slow. But if you think about it, we're judging only the first HALF of season 1 - on a show to hopefully last longer (then again that's what Caprica said...)

But really, only two and three were very slow. Four got better, and starting with episode 6 "Fzzt" I was all in.

Yes it is better than "total write-off" by this point.