Miles Vorkosigan is the son of one of the most powerful men on Barrayar, but is also a cripple, cursed with fragile bones and occasional hubris. When his pride overrides his good sense and leaves him too injured to take part in entrance examinations to the Barrayaran academy, Miles is washed up and left without a future. Intrigued by a mystery involving his bodyguard, Bothari, Miles decides to take an offworld trip...but nothing goes to plan and before long Miles's fast-talking has earned him the command of a fleet of starships, thousands of mercenaries and involvement in a civil war which is none of his business. Miles has some explaining to do. 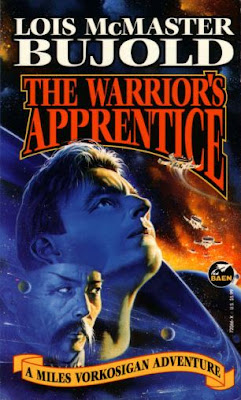 Whilst chronologically The Warrior's Apprentice is the third volume in The Vorkosigan Saga, for most people it's where the series really begins. This is the book where the main character of the series, Miles, debuts as an adult character and it also represents a notable tonal shift from the previous two volumes, Shards of Honour and Barrayar. Whilst those two books were fairly serious (aside from brief comedy-of-manners episodes), The Warrior's Apprentice is more rambunctious. It's a bit of a romp, actually, with Miles' fast-talking mouth and off-the-cuff inventiveness (i.e. lying his head off) getting him in and out of trouble so quickly readers may experience whiplash trying to keep up with it.

It's a novel which can be firmly filed under 'fun', although there is a tragic core to the novel involving the character of Bothrai. Bujold writes this mystery so it works from two angles: if you've read Shards of Honour and Barrayar, you know what's going on long before Miles does and Bujold milks the tension effectively as Miles investigates the matter. If you haven't read those books and are as much in the dark as Miles, it works just as well. The tragic interlude (and the finale, which involves a brief dash of political intrigue) are a bit out-of-keeping with the book's overall tone, but Bujold shows impressive mastery of pacing in allowing the narrative to organically shift to integrate them before moving back to a less serious feel.

The result is a novel that is often quite funny, but also reflects the central character very well. Miles is a ball of energy that tends to drag people along behind him into various crazy schemes they'd never normally want to be a part of, but his momentum somehow keeps everything afloat. The novel works this way as well, with the plot taking increasingly ludicrous turns but it not mattering because Bujold infuses the novel with so much energy and verve you just want to read along and find out what happens next. Bujold's skills with characterisation also help define the book's setting much more clearly, with even briefly-appearing secondary characters getting fleshed out into three-dimensional people within just a few paragraphs.

Negatives? The narrative sometimes feels a little too silly for a book that actually isn't an out-and-out comedy. The concluding section on Barrayar is also perhaps a little too neat and tidy, and there seems to be a narrative disconnect between Cordelia's treatment by her own people on Beta Colony in the first two books (where she was treated as a criminal) and her well-regarded position here. But there are fairly minor issues.

The Warrior's Apprentice (****) isn't high art or hard SF, but it is entertaining, fast-paced and well-characterised, with just enough pathos and tragedy to add some depth to it. It is available now in the UK and USA as part of the Young Miles omnibus, along with the novella The Mountains of Mourning and the novel The Vor Game.
Posted by Adam Whitehead at 12:38