Man of Steel is, technically, the first on-screen reboot of the Superman mythos since 1978's Superman: The Movie. Produced by the Christopher Nolan, written by David Goyer and directed by Zack Snyder (300, Watchmen), it's an attempt to bring the moral ambiguity and 'grittiness' of Nolan and Goyer's Dark Knight trilogy of Batman films to the Superman franchise, and set up a new shared universe of films based on DC comics characters. 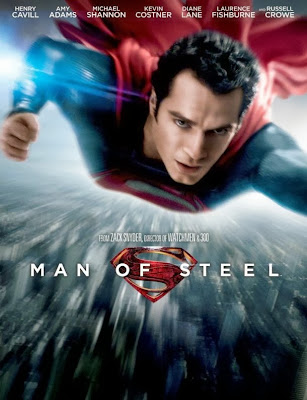 Things start promisingly with a visit to Krypton, depicted as something between Avatar (the Cameron movie) and Dune, with a mixture of ultra-advanced technology and feuding nobles. Russell Crowe plays Jor-El, here depicted as a scientist trying to save his world from imminent destruction but, in typical Russell Crowe style, is also capable of laying waste to entire platoons of soldiers single-handedly. Crow runs afoul of Michael Shannon's General Zod during a coup but still manages to blast his infant son (eventually a capable and reasonably good Henry Cavill) into space before the planet explodes. Zod and his cohorts are sentenced to eternal imprisonment in the Phantom Zone, which works out about as well as it ever does.

The infant Kal-El arrives on Earth and is found and raised by Kent family near Smallville, Kansas. Kal-El aka Clark's crazy powers and abilities soon manifest and his human parents (ably played by Kevin Costner and Diane Lane) are soon spending their time running around quashing rumours that their son is a space alien and instilling him with noble human values. Clark attempts to lie low in a number of fairly innocuous jobs but his tendency to rush into dangerous situations to rescue people soon attracts the attention of a reporter, Lois Lane (Amy Adams). Clark discovers a Kryptonian ship which he can use with technology from his own crashed vessel to create an interactive AI based on his father's personality. This allows him to learn about his heritage, but also sends out an automated SOS which lures Zod and his crazy crew to the planet. Cue a lot of carnage as showdown follows showdown until the film climaxes.

The storyline is, in principle, a good idea. The film avoids any mention of Lex Luthor or Kryptonite, and the use of Krypton, Zod and Jor-El as an AI are all good notions that give the story a personal investment for Superman whilst allowing the origin story part of the narrative to flow into the actual present-day storyline. Unfortunately, this doesn't work out in practise. The film's first hour, just under half the total running time, is overwhelmed by backstory and exposition. The Krypton sequences with Russell Crowe are pretty good, with a strong visual identity and Crowe - easily the best performer in the movie - doing some excellent work, grounding the fantastical landscapes and events in more relatable issues of family. Michael Shannon is a bit thuggish and lacking in nuance as Zod (especially as the film goes on and he gets more shouty), but he has credible motivations and presence. The Krypton sequence is imaginative and involving, but also overlong.

Once on Earth, the film becomes a confused morass of flashbacks (many of them pretty pointless) and present-day story. Kevin Costner is very good as Superman's human father, right up until he gets what is, by a considerable distance, the stupidest, most pointless and most unconvincing death scene in the history of cinema. The overwhelming stupidity of this sequence, not to mention that it was completely unnecessary, may be the film's lowest point. Some individual sequences such as Superman saving the crew of an oil rig or learning to fly by first jumping really high (a nod to early versions of the character who couldn't fly at all, only jump miles at a time) are much more successful. Amy Adams's Lois Lane, who soon enters the story, is also really good. She plays Lois as a smart, intelligent reporter in her thirties who is more plausible than other takes on the character. Crucially, she is also aware of who Superman is from the off. This is an obviously different take on the character relationship, avoiding the whole 'wears glasses as a disguse' cliche, even if it makes no sense whatsoever (Perry meets Superman but later falls for the old 'glasses' trick hook, line and sinker). But still, points for trying on that score. More disappointing is that Adams and Cavill don't really have much chemistry, and their eventual romance is utterly unconvincing.

The film continues to try hard to succeed: Zod's plans for Earth are actually somewhat logical and make sense. They also give hope to Clark that one day Krypton can live again, which should lead to greater moral confusion over what is the right thing to do. But this never happens: Clark decides early on to defend Earth no matter the cost and never budges from that, making these attempts to complicate things fail outright.

This leads into the film's climactic action sequences which are, on the whole, highly disappointing. The action sequences are over-indulgent and seem to go on forever. They also frequently lack context or conviction: seeing two invulnerable beings fight one another knowing they can't hurt one another makes for zero tension. The CGI is also flat-out terrible in these battles, rather bafflingly since Krypton is so impressive at the start of the film. The character-replacement CGI is unconvincing, the placing of the actors' faces on CGI bodies is amateurish and some of the flight and movement CGI is worse than the twelve-year-old original Spider-Man movie. Usually in 2013 the very least you can say about an otherwise terrible movie is that the effects are good, but Man of Steel can't even manage that right. The final battle also indulges in some dubiously lingering shots of collapsing skyscrapers with hundreds of people in them (or about to be squashed by them) which makes for uneasy viewing in a Superman feature.

Man of Steel (**) shows hints of a fertile imagination and originality (mostly in the opening act set on Krypton) whilst showcasing a few good performances, but these are soon buried by inane dialogue, terrible action sequences, poor CGI and a total collapse in logic at several key points in the film. Man of Steel is not only not very good, but even manages to make Superman Returns look like a capable and competent film in comparison. Overall, not recommended.
Posted by Adam Whitehead at 15:47

Pa Kent was probably my biggest issue with this movie. While Costner may have inhabited a role with consistency, it wasn't the Pa Kent of the Superman mythos he was playing.

Pa was never a scornful and somewhat selfish man. Sure he wanted to protect his son from exposing himself, but here he projected cowardice and hiding rather than embracing and doing the right thing for the greater good.

This movie has a lot of problems and I don't like it very much, but let's not get crazy and start praising Superman Returns in comparison. That is a quite boring and subpar film which does not deserve to be defended.

This review sums up my thoughts on the movie almost exactly. I would add that it's a movie that is somewhat less than the sum of its parts. Adams is good, Costner is good, Crowe is very good and and Cavil is, at-worst, passable (the Superman character remains one of the toughest superheroes to play with any kind of depth). If you had told me going in that the movie would have had those level of performances, I would have expected it to be great. But somehow it didn't mesh.

My biggest problem as I left the theater on this was that I felt like the potential was there for a very good movie and they swung and missed. Some of the tweaks they made to the Lois-Clark relationship were very solid and the "fate of Krypton vs fate of Earth" dilemna for Clark had the potential to be something interesting. But the execution was just way off.

Also, the final fight scene was franchise killing. Aside from the lack of investment in the consequences (once you've seen your hero crash unscathed through 9 buildings, the 10th really loses its effect), if Superman had actually been involved in the total decimation of a major city, there's no way he'd ever be seen as anything other than a dangerous monster by the people of Earth. Unless they're willing to really pursue that avenue, having so much destruction was a terrible idea.

Yeah, I have to agree. It's a story with some good concepts, but which is ultimately held back by a failure to understand its protagonist. Superman is supposed to be a hopeful, inspirational figure, not someone you fear.

Agree on most points. The ending especially was a TOTAL miss. That level of destruction and Superman not batting an eyelash... Terrible.

I prefer the Superman Returns any day of the week. Sure, it was disappointing during the first sitting, but every time after that, when I knew not to get too excited, it never failed to give me my Superman fix.

I enjoyed the first 1/2 to 3/4 of the movie, but they really lost me during the final battle as I started paying closer attention to my iPhone than to the movie. The final battle became redundant and no longer required my attention. It was almost like the movie needed to be a certain length, but they didn't have the material to meet that length, so they just decided to throw Superman through buildings for 45 minutes.

They need to come up with creative ways to challenge Superman instead of physically challenging him. After all, Superman can't be harmed and doesn't feel pain. When you see a large caliber bullet bounce off his eyeball it isn't very dramatic to challenge Superman physically even if that occurred in a different movie. They also need to find something other than Kryptonite for his weakness because that's been over done so many times that it has now become cliche and boring.

What they need to do is torment him emotionally, and put him in no win situations that we, as viewers, cannot readily guess the outcome.

I am a hard-sell when it comes to Superman, having spent my childhood afternoons watching the old tv version. I read and re-read my collection of comic books as a child growing up in the 60's. Don't challenge me with Superman trivia--you won't win.

Christopher Reeves in both looks and acting portrayed the character beautifully with his "Lois, I never lie." So true to the comic character I grew up with. I won't hide my disappointment when he slept with Lois--something the original writers avoided.

"Man of Steel" disappoints--Superman is weak, dishonest and doesn't look remotely like the character in the comics.

If Hollywood is going to dramatize comic heroes--do it right and be true to the writers who created them.