For the past month or so, there have been growing signs that Bethesda are close to announcing the next Fallout computer role-playing game, likely to be called Fallout 4. Having published their last game, The Elder Scrolls V: Skyrim, two years ago, it's certainly about the right time for them to be announcing their next title. 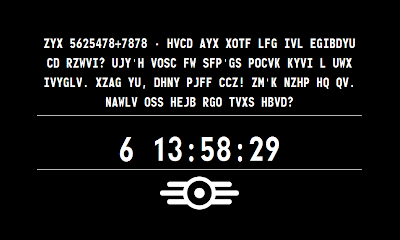 On 14 November, this site - The Survivor 2299 - appeared without explanation. The typeface is reminiscent of that used in the previous two Fallout games and '2299' is a date close to those games: Fallout 3 took place in 2277 and Fallout: New Vegas in 2281. A countdown soon appeared on the site, apparently counting down to 11 December this year, when it is theorised the game will be formally announced.

However, doubts over the site's authenticity grew when a number of apparently related sites on Tumblr, Reddit and Twitter were exposed as fakes. There was also confusion over a simultaneous trademarking of the 'Fallout 4' name by Bethesda in Europe, which appeared to disappear soonafter (however, it was later revealed that the 'Fallout 4' trademark would probably be rolled into the generic 'Fallout' trademark listing, explaining why it cannot be found; a separate 'Fallout 3' trademark also does not exist, for example). There were also suggestions that the site was a fake concocted by the same person who recently faked trademark claims and announcements for both Shenmue 3 and Half-Life 3.

That said, in both those cases the sites were exposed as being fake very quickly and the official licence-holders confirmed they were fake. Bethesda has remained conspicuously silent on the subject of The Survivor 2299. It has also failed to take any kind of legal action against the site, despite being fairly litigious when it comes to its trademarks being used without its permission. As the weeks have gone by, the text on the front page has changed and morse code messages have also been added. In some cases, these have been backed up by odd radio transmissions in the Boston, Massachusetts area which are tied to clues on the site. These suggest that an Alternate Reality Game is actually going on, laying down clues to the storyline of Fallout 4 before its official unveiling. It should be noted that strong rumours circulated last year claiming that Bethesda researchers had been seen in and around Boston taking photographs and making notes.

This document (constantly updated) outlines what is known so far, including translations of the morse code and broken text messages. The Fallout Reddit community is tracking developments, and has created the following map which shows all the locations mentioned so far. 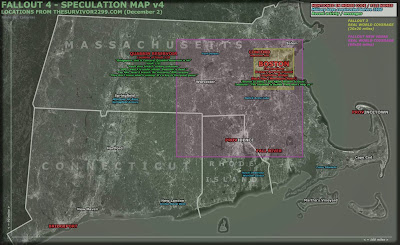 Based on the information revealed so far, the following conclusion can be reached:

Fallout 4 would appear to be set in 2299, eighteen years after the events of New Vegas. It opens with Vault 119, located near the Quabbin Reservoir west of Boston, being destroyed by forces unknown. You play 'the Survivor' (following on from the previous game character titles: the Vault Dweller, the Chosen One, the Lone Wanderer and the Courier), presumably the last survivor of Vault 119. By all indications, the Survivor travels to Boston, where radio signals indicate that the settled area of Black Row (presumably located in the former Boston area of Merchants Row) is also threatened. It is suggested that the Institute (formerly the Massachusetts Institute of Technology), mentioned in Fallout 3 as a site of scientific research and the home to some advanced androids, might be involved with or behind the attacks. The area around Boston is known as the Commonwealth, although this is a historical term (to the New England Commonwealth, which in Fallout's alternate history controlled the northern half of New England as an additional division between the federal government and the individual states), not a reference to the civilisation level of the area.

It is assumed that Fallout 4 will be, like most Bethesda games, an open-world title where you choose which quests to pursue and how to customise your character against a big background story. You will be able to get involved with this story or not as you choose. Fallout 4 will almost certainly be released on PC, X-Box One and PlayStation 4, though cut-down versions for the X-Box 360 and PlayStation 3 are possible. It is assumed, based on Bethesda's previous comments, that Fallout 4 will continue to use the Creation Engine used for Skyrim (and, in an earlier form called GameBryo, all of Bethesda's games since Morrowind in 2002). However, if the new game is not going to be released on the XB360 and PS3 it will be free of the memory limitations of those machines, and may feature a considerably larger playing area and 'open' cities which do not need to be broken up into smaller zones (a notable problem with both previous games, particularly within the cities of Washington DC and New Vegas themselves).

What is interesting is that Skyrim was announced at the Spike Video Game Awards in December 2010 (before its release in November 2011), but the countdown is to a time after the 2013 VGAs are finished. This indicates that the announcement, if true, will be made as a special, possibly online-only event.

If this does turn out to be a hoax, it's an impressively elaborate one and one that Bethesda themselves seem to be indulging. We should know for sure in less than two weeks.
Posted by Adam Whitehead at 11:31