Will Obsidian and Red Eagle put a WHEEL OF TIME RPG on Kickstarter?

Yesterday, Rock Paper Shotgun interviewed the guys at Obsidian Entertainment about their upcoming plans. Their latest big-budget game, South Park: The Stick of Truth, is due to launch in April 2014 and their Kickstarted, overhead RPG Pillars of Eternity should follow soon after. Obsidian are already looking at ideas for a new Kickstarter project. 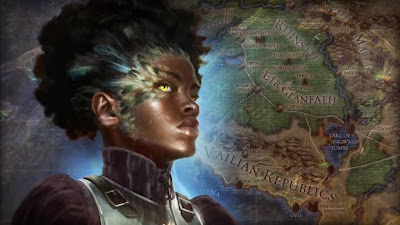 They talk at length about ideas for a much more open-world style of game using the Unity Engine (which they are using for Pillars of Eternity), but they also drop hints to what the next Kickstarter should be. One of the ideas they are actively discussing is a licensed game as part of a pre-existing franchise. This, to me, hints that they might be talking about their long-delayed Wheel of Time RPG.

Backing up, about three years ago Obsidian signed a development deal with Red Eagle, the rights-holding company which controls the rights for Wheel of Time video games. This deal was to make a single-player RPG set in the Wheel of Time universe and world. Obsidian seemed excited by what they could do with the game, and fan response was positive, especially when it was revealed that Obsidian's best-known writer, Chris Avellone (the creative force behind Fallout 2, Planescape: Torment, Neverwinter Nights II: Mask of the Betrayer and Fallout: New Vegas - Old World Blues, several of the greatest RPGs ever made), would be working on the project.

However, nothing has happened with the idea since. Red Eagle was in charge of securing the funding for the game, and failed to do so. Electronic Arts signed a speculative distribution agreement for the game, but chose not to fund and formally publish it. With Triple-A RPG budgets heading towards $100 million (Skyrim, for example, cost $80 million and the Mass Effect trilogy not far off that per game), Red Eagle proved unable to come up with the cash themselves.

Last year, both Red Eagle and Obsidian launched Kickstarters. Red Eagle launched one to make a Wheel of Time casual strategy game for tablets and smartphones, Banner of the Rising Sun. They asked for $450,000 and raised $3,000, a hugely disappointing failure. Obsidian launched one to make an isometric, 'old-skool' RPG with impressive graphics but a much tighter focus on story and character. They asked for $1.1 million and instead raised over $4.1 million, an absolutely massive success.

With both Red Eagle and Obsidian willing to use Kickstarter to achieve their goals, it makes sense that they might consider joining forces to do the same for a Wheel of Time game. The viability of this depends on the deal with EA. If this has expired, there's nothing stopping them doing this. However, if EA retain the distribution rights the project will likely not be viable: Kickstarter is for games that otherwise wouldn't get off the ground, and the involvement of a massive company like EA would be toxic for any such campaign. Provided there are no obstacles, the combination of Obsidian's Kickstarter and game-making experience and Red Eagle's Wheel of Time licence could be highly appealing.

Obsidian will announce what their next project is in the spring, so we have a few months to find out if this is the direction they are going to go in.
Posted by Adam Whitehead at 15:44

I would imagine Obsidian's resume led them to far greater success in Kickstarter. Red Eagle? Never heard of them.

Good move on Red Eagle's part for joining forces with Obsidian, hence getting their name out there associated with a quality company. And Obsidian for getting their wondrous hands on The Wheel of Time. Hope it works out well for the fans most of all!

EA would not be toxic. EA can show their support for independent developers by helping due to the sheer size of wheel of time fandom

Anything ever happen with this?

Red Eagle, the license holders, failed to come up with the budget, so it never happened.