Ten years ago, on 8 December 2003, the first part of a new Battlestar Galactica mini-series aired on the Sci-Fi Channel in the United States. In response to strong ratings and rave reviews, an ongoing series was commissioned. The series eventually concluded in 2009 after four seasons, 75 episodes, two TV movies, a Hugo Award, a Peabody and a slew of technical Emmies. 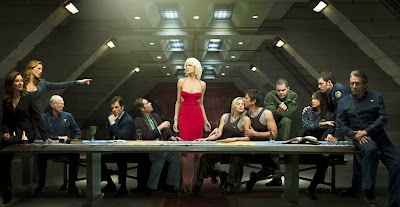 The crew react to the news that Six has eaten the last post-supper mint.

BSG was an attempt by its writers to rejig TV science fiction for an adult, mainstream audience. Most of the creative team - most notably showrunner Ronald D. Moore - had previously worked on the Star Trek franchise and had grown frustrated at the limitations on realistic human conflict they could portray on those shows. BSG threw out a lot of the rules of TV SF by featuring no aliens, more realistic spaceflight physics (the first show since Babylon 5 to do it on a large scale), being more ruthless and featuring more morally ambiguous characters. However, the series also focused on the classic SF trope of humans versus AI, and if it is possible for biological and machine intelligences to co-exist.

The series was also notable for its more relatable aesthetics: no jumpsuits or impractical onesies here but shirts and ties and more convincing military uniforms. The Galactica didn't stay in the same shape each episode but got more broken-down and damaged as time passed. Its stock of Viper fighters and trained pilots dwindled (despite a handy mid-series resupply). Each episode gave a count of how many survivors there were from the Cylon attack, and this number dropped (sometimes by quite a lot) as casualties were sustained. Characters died, sometimes heroically in battle or guiding stranded ships through radioactive clouds, but sometimes committing suicide after reaching tragic breaking points. It was a series that - for the most part - did not pull its punches.

The characters were familiar archetypes turned into more realistic human beings: hotshot pilot Starbuck has family problems; executive officer Colonel Tigh is an alcoholic; President Roslin is suffering from a terminal illness; Apollo is a great pilot but is unsure of his future; and scientist Baltar is the biggest walking collection of neuroses you will ever see on TV. Even stoic, unflappable Commander Adama finally breaks down from the pressure at the worst possible moment. The actors, from seasoned hands like Edward James Olmos and Mary McDonnell to newcomers like Katee Sackhoff and former model Tricia Helfer, relished their complex, unpredictable roles and the meaty storylines they could get stuck into. 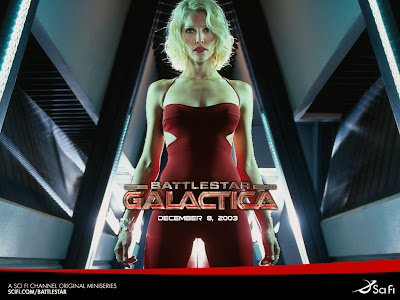 "Are you alive? Yes? Just checking."

In terms of visual effects, the show was a substantial step forwards in quality. One of the earliest shows to take advantage of HD, it featured astonishing, imaginative space battles and some excellent spacecraft design, sometimes drawing on the original 1978 show for inspiration and at other times going its own way. The use of CGI to convincingly portray beings who were supposed to be physically present in scenes, such as the robotic Cylon centurions, was ahead of its time as well.

Of course, not all great things last. From the opening part of the mini-series to somewhere around the fifth episode of the third season, the show was almost flawlessly excellent. The writing was tight, the actors were great and the show had a real sense of momentum and purpose. The long-running story arc unfolded logically and even sub-par episodes, like Black Market or Sacrifice, were still eminently watchable. Some problems appeared during the confused 'New Caprica' arc, with the decision to jump forwards some sixteen months from the end of the previous season creating a disconnect in character development which was never really fixed: the behaviour of some characters, most notably Roslin and Apollo, became random and lacking in motivation following that point. The New Caprica arc, though visually exciting and featuring some strong moments of drama and characterisation, also seemed to trip up on the show's own press. The apparent desire to invoke comparisons with the contemporary war in Iraq was laudable, but also confused: were the colonials the Iraqi insurgents or the Cylons? Or vice versa? As an analogy, it lacked substance. 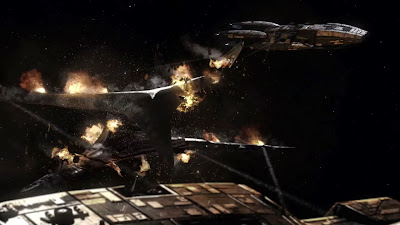 BSG was noted for its superb acting and scripting, as well as its emphasis on politics and realistic, OH LOOK SPACESHIPS PEW-PEW BOOM!

In terms of the plot, the series and ongoing storyline also seemed to lose coherence as it went along. The Kobol arc, which dominated no less than nine episodes, was completely forgotten about within a few weeks and the revelations from that story that was supposed to lead to Earth were disregarded, or referred to only in a very confused manner, in later episodes. Listening to Ronald D. Moore's commentaries, it is shocking how often hugely major story points were developed 'because they were cool' with no regard for how they fitted into the big picture. Sometimes these storylines were begun only for the writers to lose interest and get rid of them as quickly as possible. Lame retcons and wince-inducing continuity errors came to dominate the last two seasons, sometimes minor and easy to ignore but sometimes major. The show remained extremely well-acted to the end, and great episodes still cropped up towards the show's finale, but BSG's once-unassailable quality level dipped quite alarmingly in those last two seasons. The finale summed up these issues with some terrific moments of acting and some brilliant effects and space battles, but an actual ending that ranks amongst the stupidest ever put to screen. For a show that, at its best, never shied away from complexity and having different points of view, the resolution was far too Luddite for it ever to convince.

Still, these major dips in quality aside, BSG was a great show. During those first two-and-a-bit seasons it was easily batting on the same level of quality as contemporary shows like The Wire, Rome and Deadwood, and was a lot better than the likes of Lost or the relaunched Doctor Who. It couldn't quite sustain that quality level to the end, but when BSG was on top form, it was the best space opera ever made. We're still waiting for the space opera that will come along and build upon BSG's successes, but until then revisiting the original is still, warts and all, worthwhile.
Posted by Adam Whitehead at 15:33

I completely agree with everything except I would change one sentence: "[Had] BSG [stayed in] top form, it [would have been] the best space opera ever made." Since it didn't, Babylon 5 wins that prize, in my opinion.

I'd like to re-emphasize that the end was the WORST EVER.

Great write-up, Wert. I don't think I'll ever find another show, sff or not, that blew me away like BSG.

Unlike you, I thought it (pretty much) maintained it's level of quality throughout, even if it became a lot more existential and a lot less "gritty human drama...in space."

Bear McCreary also deserves kudos for penning one of the best TV soundtracks ever. Even as the quality dipped in that last season and three quarters, the music was always reliably fantastic.

And now I'm in the mood to rewatch this show. With some episode skipping.

I'm supposing Firefly isn't a space opera, as it's more focused on normal folk living on a ship, just trying to keep a roof over their head and food on the table, instead of more epic scale space dramas. But it came out around the same time, and looks really good too. The CGI looks really good on Blu-Ray, for the most part. As good as BSG (though BSG used it alot more).

I'd also put The Wire and Deadwood as well as more recent shows like Terriers and Rectify above BSG, even at it's best. Better than Lost? Easilly, we do agree. On par with The Wire? Certainly not easilly, but maybe not far from it. Important show? Easilly :)

The start was great but they just tried too hard at the end. You can tell they were having a difficult time writing the ending. They just didn't know how to end it.

Agree with much of it, but for me the illogical and seemingly-agenda-driven religious thread tainted so much of it. I tried a re-watch and found it coloured my enjoyment so massively I gave up.

It should have been the best SF show ever, but put a big effort into undermining itself. The many and obvious flaws of Babylon 5 never soured my memory of the show, but BSG's had done that before I even reached the end.

I agree with pretty much everything you said. I'm in the middle of a rewatch of the series and am just closing out the second season, so I haven't gotten to the point where it starts getting disappointing yet (though I think an argument could be made that that point is a bit further along than mid-Season 3).

Having watched it a few times now, I like you're analysis of the ending quite a bit--that given the previous complexity of the series, the Luddite ending was too pat and one note. Even if they decided to go with that ending, to make it good it would have required more storytelling. One thing I found extremely unrealistic was that all of the 40-some-odd-thousand survivors apparently just accept Lee Adama's decision to not try to maintain their technology. In reality there would obviously be a great amount of debate, along with rival factions, etc....just like earlier story elements in the series.

I also think it would have been much more powerful if they had been more explicit with the idea that perhaps they made the wrong decision: all they did was delay humanity's technological development, not stop it. What if they had continued on, kept their technology, and made a more concerted effort to work toward peace and tolerance and cooperation? Arguably just saying "nope, screw the technology" is just a massive way of avoiding an inevitable problem.

What were the retcons you were referring to?