It is 2137. Fifteen years ago, Amanda Ripley's mother, Ellen, disappeared along with her entire crew and her ship, the mining vessel Nostromo. Amanda has become a skilled engineer, but is still upset by the mystery. The Company recruits her to join a mission to Sevastapol, a Seegson Corporation space station. According to reports, the Nostromo's flight recorder has been found and taken to the station. Arriving on board, Amanda finds a station in chaos, different sections sealed off and the surviving crewmembers rendered paranoid and distrustful of one another. With androids running amok and systems failing, Amanda has her work cut out...before she discovers something else is on board. 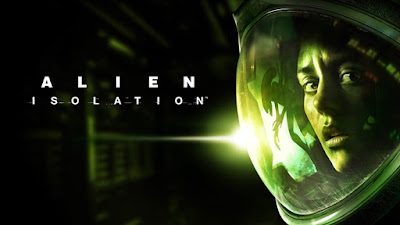 Over the decades, many video games either inspired by or directly based on the Alien franchise have been released. Almost uniformly, they have taken either Aliens or Alien vs. Predator as their inspiration, featuring high-octane combat against the xenomorphs. Some of these games have been great fun (others not so much), but the one thing they've mostly had in common is feeling like generic action games with an Alien skin slapped over the top.

Isolation is the first modern game to take the original Alien as its inspiration. The main character, Amanda, is a resourceful engineer and fixer, but she is not a colonial marine and she is not a Predator equipped with plasma weapons and smart targeting systems. She is an extremely fragile human who finds herself up against not just other humans and deranged androids, but also a single xenomorph. Single xenomorphs may not be much threat to heavily-armoured and armed soldiers, but on a space station where the most powerful weapon is a rather old shotgun, it is a virtual god of terror, striking from the shadows at will to snag the unwary.

Alien: Isolation lays its claim to be the scariest video game ever made early on. After an introductory couple of levels largely free of danger, the designers release the xenomorph into the game space and let it and its AI do its own thing. Apart from a couple of cut scenes, the alien is allowed to traverse levels the same way the player does (except it has access to air ducts running through the ceiling and floor, which the player rarely does), responding to sounds, visual cues and threats with lethal force. As the player, you're trying to make your way through office spaces, engineering decks and medical wings, repairing damaged systems, recovering data logs or assembling equipment that is needed for your survival, with the constant threat of the alien striking at any moment.

You pick up a motion tracker early on which can tell you if the alien is nearby, although only if it is moving: on several occasions I saw no movement in the vicinity and walked confidently around the corner only to find the xenomorph lying in wait for me. As the game progresses you do gain other equipment, such as noise-makers which you can lob past the alien to try to get it to stop blocking a hatchway, and even a flamethrower which can singe it enough to make it retreat. There is no way to kill or even significantly injure the alien, though, and it remains a semi-constant threat throughout.

It's not the only problem in town, though. There are androids malfunctioning, which you can kill or sometimes trick the alien into destroying, but for the most part are best avoided. There are also other human survivors who can be killed in combat, but again this is undesirable because the noise of gunshots often lures the alien into the vicinity. Finding a bunch of clear arsehole survivors and luring the xenomorph into tearing through them can be satisfying, although less so when they're clearly people just trying to get by, like you.

For several hours, Alien: Isolation succeeds in its dual claim to be the scariest video game ever made and the best Alien game ever made (and perhaps the best single entry in the Alien franchise to date, barring only Alien and Aliens). You have to carefully weigh your options and choices on how you proceed, what tactics you will employ to avoid the xenomorph and how carefully you are going to approach you objectives. Even a decision like saving the game has to be considered carefully: it takes several seconds to save your game at dedicated computer stations, during which time you can be attacked. Save points are spaced out widely enough to encourage saving whenever possible, but the fact you have only two save slots means you don't want to waste a slot on one where you're just about to have your face gnawed off by the xenomorph (the game does create an auto-save at the start of every mission, thankfully). This even extends to reading plot-sensitive information on computer consoles or undertaking vital repair work. The game never pauses outside of the menu screen, making even the smallest decision hugely consequential.

This mix of horror and paranoia continues to be devastatingly effective for quite some time, helped by changes of pace such as missions focused more on the androids with the xenomorph sealed out of the area, but the paradigm of competing low-grade tasks whilst avoiding air vents surrounded by drool never entirely goes away. Which is when the game starts to become problematic.

At seven or eight hours of gut-wrenching terror, Alien: Isolation would have been an outstanding experience and it could have walked off with five full stars and a classic rating. But when you're past that point and still not even halfway through the game, it starts to become a little bit wearying. For a lot of players the game abruptly changes in tone when you hit The Moment. The Moment comes at a different point for different players (and a lucky few never experience it at all), but when it comes the game's tension instantly leaks out of it like a burst balloon. It might be when you walk around a corner and find the alien apparently trying to walk through a solid table. Or it might be when cowering under a table to find the alien trapped in an endless loop of climbing up into a vent and then down again ten feet away, again and again. In my case it was encountering the alien in a ventilation shaft with zero warning or ability to avoid it and instead of jumping in terror I uttered an exasperated, "Oh, come on," and hitting reload before it even attacked.

When The Moment comes, the xenomorph stops being a creature of terror and becomes an over-familiar video game obstacle, one that sometimes kills you completely arbitrarily rather than because you do anything wrong. After this point the game never really recovers, with players starting to brute-force their way through sections through repetition or going to the extreme of editing game files to remove the alien altogether (which seems completely against the spirit of the thing to me), or even quitting altogether. The alien's AI is superb but it's still video game AI which can glitch out or sometimes behave in a manner that will have you suspecting foul play (despite the designers' strenuous denials that the alien AI ever teleports or knows where the player is when it shouldn't).

There's also the problem that once the alien stops being a subject of terror, it becomes more of an inconvenience to enjoying the absolutely stunning, exceptional art design. The 1970s retro-styled Sevastopol Station is simply one of the best video game environments ever created, a clear rival to BioShock's Rapture or Half-Life's Black Mesa, a place where it's sometimes enjoyable just to walk around and enjoy the sights, which obviously you can't do when potential death literally lurks around every corner.

At around 20 hours in length, Alien: Isolation not only outstays its welcome, but it turns into a guy you barely know who shows up at the party, is a delight for a few hours, then has too much to drink and has to stay the night on the sofa, then next day has a breakdown and confesses they've been thrown out of their house and you are trying to be supportive but also kind of just want them to go somewhere, anywhere else. When the final credits kick in on Alien: Isolation, the feeling isn't of triumph but of survival, not of the long-departed terror of the alien but the encroaching weariness of the sheer size of the game (not helped by levels where you have to backtrack through areas you've already explored earlier on) and the realisation that once you get over the horror elements, it's really an extended number of fetch quests.

Ironically, Alien: Isolation (***½) mirrors the evolution of the Alien series itself: a brilliant, thrilling idea which is mind-blowingly effective but then keeps going and going long after it would have made more sense to stop, and the terror of the alien gives way to apathy due to overexposure. But for those first few hours, this is one of the best video games ever made, and you may find the game's atmosphere and power works much better for you in the longer run than it did for me. The game is available now on PC, X-Box One and PlayStation 4.
Posted by Adam Whitehead at 16:16

I remember reading at the time the accounts of people who tried the Virtual Reality version of this: several reviewers said it was so terrifying in VR that they literally couldn't play it...