Katee Sackhoff to join THE MANDALORIAN

It's been reported that Katee Sackhoff will be appearing in the second season of Star Wars: The Mandalorian, reprising her role as Mandalorian warrior Bo-Katan Kryze from the Clone Wars and Rebels animated series. 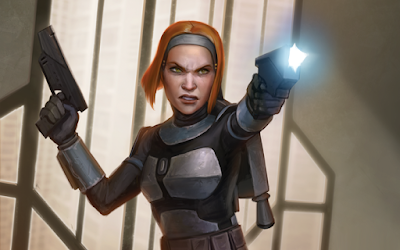 Katee Sackhoff, best-known for her role as Starbuck on the second version of Battlestar Galactica, played the character in nine episodes of The Clone Wars and one of Rebels. Bo-Katan is an elite Mandalorian warrior, a former member of both the Nite Owls and the Death Watch. In chronologically her last appearance, she helped lead the uprising on Mandalore against the Empire, eventually leading to Mandalore restoring its independence.

Bo-Katan was also the last known wielder of the Darksaber, a weapon of tremendous power and symbolism. The Darksaber made a brief appearance in the Season 1 finale of The Mandalorian, being wielded by Moff Gideon (Giancarlo Esposito). It's unknown how Gideon seized the Darksaber, but it stands to reason that the Mandalorians would be unhappy about this and Bo-Katan would be leading the search for the weapon.

Sackhoff will be joining an intriguing cast for Season 2, which has already added Temuera Morrison as Boba Fett, Rosario Dawnson as Ahsoka Tano and Michael Biehn in an unknown role.

Season 2 of The Mandalorian has already concluded filming and is scheduled to air in October this year on Disney+, although this will depend on if the show's ambitious post-production requirements can be completed by workers at home.
Posted by Adam Whitehead at 18:04