AD 910. The Kingdom of Mercia has launched an ambitious invasion of East Anglia, to the disquiet of their ally, King Edward of Wessex, who was not consulted about the plan in advance. However, the Danes have outflanked the Mercian advance and attacked Mercia's capital instead. As Wessex and Mercia try to regroup, the services of Uhtred are called upon, but he has gone north on a daring mission to reclaim his ancestral seat at Bebbanburg. 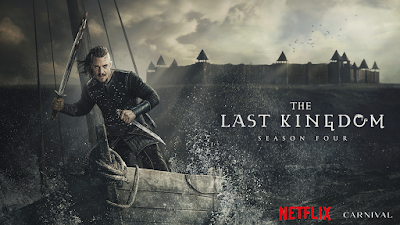 The Last Kingdom has become one of the most reliably entertaining ongoing series on television. A historical epic, it adapts Bernard Cornwell's novel series about the unification of England across several generations and three kings, starting with Alfred the Great, all seen through the eyes of Uhtred of Bebbanburg, a Saxon of Northumbria raised by the Danes as one of their own.

The fourth season adapts the novels The Pagan Lord and The Empty Throne, although it continues to take significant liberties with the source material. This season, in particular, has barely any similarities with the novels in question.

The first half of the season sees the Danes on the rampage yet again, this time under the warlord Cnut (protip: always check the spelling) who sneakily exchanges the Danelaw in East Anglia in return for the prize of Mercia itself. Uhtred is distracted by an opportunity to take Bebbanburg, which predictably goes badly wrong. After four seasons viewers may find it wearying that, once again, Uhtred is presented with an opportunity to fulfil his destiny and once again loses it, but it remains a powerful motivational force for Uhtred's actions. The second half of the season switches to politics, as the throne of one of the Anglo-Saxon kingdoms becomes vacant and King Edward tries to manoeuvre an ally into place without it being too obvious that is what he is trying to do, whilst a new and canny Danish warlord arises.

The theme of the season is family: Uhtred's son Young Uhtred and daughter Stiorra are now teenagers, the former a Christian priest and the latter a half-wild Dane. Uhtred is also in an ill-advised relationship with Aethelflaed which he hopes may bring him peace and happiness, which feels a bit naive of him at this stage in his life. In what is probably the season's strongest and best-acted arc, we also get a great bit of storytelling for Aelswith, King Alfred's widow, who feels left out of the political counsels and no longer needed. Eliza Butterworth has always been excellent in making what has been a traditionally antagonistic character consistently understandable and occasionally sympathetic, but this season she is on another level as she brings her character's steel and dignity into debates actually on Uhtred's side (a sequence where she actually congratulates him on a well-judged political decision leads to a look of surprise on Uhtred's face that is quite comical). Her attempts to maintain the familial relationships between her son, the king, and her daughter, the Lady of Mercia, area also well-handled.

Elsewhere, the cast are reliably strong as ever and numerous new castmembers make good first impressions. In Season 3 the show suffered from the loss of David Dawson (King Alfred) and some ill-judged casting decisions (particularly Thea Naess as Skade, who was not suitable for the role), but Season 4 sees the casting team get their mojo back and the new characters all get their moments in the sun.

The scope of the series expands, with the action now incorporating events in Wales, Northumbria and Ireland, and there's also a feeling of political and military progress in the over-arcing struggle. Whilst in Season 1 Wessex was the "Last Kingdom" of the title, the only Saxon kingdom left free, by the end of Season 4 all of the kingdoms have now been reclaimed, with one last hold-out which King Edward has turned his sights towards. In fact, I'm starting to wonder if Netflix are hedging their bets that they could end the series with a fifth season, with the narrative foundations in place for them be more bold in deviating from the books and wrapping things up sooner than in the books. It'll be interesting to see what decision they make there.

The season has a few weaknesses. The battle sequences are a bit of a let-down, with only one shield wall assembled in the entire season and a decidedly ahistorical focus on cavalry engagements (which were not hugely common at this period in history, when horses were expensive and mass cavalry formations not particularly common in England) and ranged missile weapons. After Season 3's strong battle scenes, Season 4's feel underwhelming. The political scheming in the second half of the season is also a bit overwrought. The Last Kingdom is not early Game of Thrones in that respect and the politicking is a bit obvious. It's good when the last two episodes move beyond that to a more exciting "city under siege" story, although the mechanics of the siege are a bit disappointing (the way the city initially falls to the enemy is fairly nonsensical).

For its mix of strong characters, solid action beats and engaging storytelling, the fourth season of The Last Kingdom (****½) continues this show's run of being one of the most consistently entertaining shows on air. It is available to watch now on Netflix worldwide.
Posted by Adam Whitehead at 15:02