In fully-expected news, CBS has greenlit a new Star Trek television series. Star Trek: Strange New Worlds, aka "the Captain Pike show," will focus on the adventures of the USS Enterprise under the command of Captain Christopher Pike. 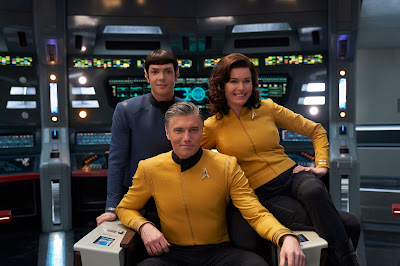 
After the first season of Discovery attracted a mixed reception, the second season had a much stronger reaction due to the presence of Mount, who gave a charismatic performance as Pike. Peck was also praised for the difficult task of stepping into the shoes of both Leonard Nimoy and Zachary Quinto as Spock and doing a good job.

Work on Strange New Worlds is already underway, but full production will of course have to wait on the end of the current coronavirus pandemic.

The series is no less than the fifth Star Trek project put into development by CBS All Access since the franchise's return to television in 2017. Strange New Worlds follows Discovery, Picard, Lower Decks, Section 31 and an animated series aimed at younger viewers.
Posted by Adam Whitehead at 15:18