The Tower of the Swallow by Andrzej Sapkowski

The Empire of Nilfgaard continues its invasion of the Northern Kingdoms, unaware that several of its most wanted targets are now far behind its lines. Ciri, the missing Princess of Cintra, has joined forces with a band of outlaws plaguing the northern provinces of the empire, whilst the witcher, Geralt, and his band of mismatched companions are now heading into occupied territory in search of the missing princess. But events take an unexpected turn when Ciri is captured by a brutal sellsword and discovers previously unknown powers. 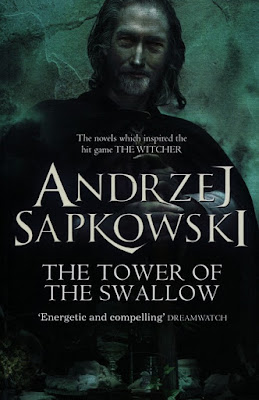 The Tower of the Swallow is the sixth Witcher book and, chronologically, the penultimate. It continues the narrative from Baptism of Fire with Geralt and his party trying to track down Ciri, but it is grander in scale and fortunately not as inert in terms of plot progression.

The Tower of the Swallow feels like the broadest-scoped novel in the series to date, with two major stories occurring in tandem and a host of subplots. We get Ciri on the run, being captured and finally realising her true destiny. There's some excellent characterisation in this section, especially of the ruthless sellsword Bonhart and Ciri herself, who is finally realising her own ability to determine her path instead of being passed around between those who would abuse her name or her power. With Ciri largely absent from Baptism of Fire, it's good to get back to her story.

We also get more development of Geralt's party. After their snail's pace journey through a forested warzone in the previous book, they break out of that rut in this volume and make much better progress. There's a bit of a Dungeons and Dragons feeling to Geralt's adventures as he gets a party together and they try to follow the important main plot only to get constantly sidetrack by apparently more urgent side-quests. This is all fun stuff, although again the feeling is that the main storyline is really not progressing very far or very fast at this point.

We also get cutaways to political intrigue in the Nilfgaardian capital, various military manoeuvres as the Northern Kingdoms try to regain the initiative against an overextended Nilfgaard and some interesting scenes as we visit new locations, such as two subplots, set in the northern kingdom of Kovir and on the Skellige Isles respectively, which are both told with economy and skill.

Sapkowski's way with witty dialogue and musings on human nature (especially in terms of desperation and warfare) remain intact and it feels like he's here handling a disparate narrative consisting of widely-scattered characters and storylines with a great deal more confidence than in previous novels in the series, even if there is a feeling that this book and the two previous ones could have been telescoped into one, stronger volume with a bit more discipline.

Still, The Tower of the Swallow (****) continues the story of the Witcher with aplomb and is more enjoyable than the previous book in the series. It is available now in the UK and USA.
Posted by Adam Whitehead at 17:16

Email ThisBlogThis!Share to TwitterShare to FacebookShare to Pinterest
Labels: andrzej sapkowski, the tower of the swallow, the witcher