According to his official Facebook page, the fantasy author Terry Goodkind passed away yesterday at the age of 72. 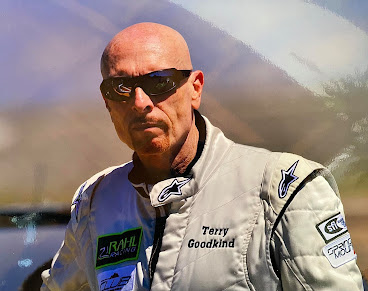 Born in Nebraska in 1948, Goodkind had little initial interest in writing due to dyslexia, with which he had little support through education. He instead worked as a woodworker, artist and house-builder. It was whilst building his own house on an island off the coast in Maine in 1993 that he conceived of an idea for a fantasy novel which became Wizards' First Rule, the first volume in The Sword of Truth series. The book was published in 1994 by Tor Books with a huge marketing push, as they believed it could replicate the success of Robert Jordan's Wheel of Time sequence.

The Sword of Truth never achieved either the critical or commercial success of The Wheel of Time, but it did become Tor's second-biggest-selling series of the late 1990s. The series concluded in 2007 after eleven volumes, having sold over 25 million copies. Goodkind attempted to shift gears to write a contemporary fantasy, The Law of Nines, for a different publisher but the novel did poorly and plans for further books in the series were shelved. Goodkind returned to the Sword of Truth world to pen a series of prequel and sequel novels. In total Goodkind published twenty-two novels in his lifetime.

The Sword of Truth was adapted for television by Sam Raimi and Rob Tapert. Renamed Legend of the Seeker, two seasons of the show were produced in 2008-10.

Goodkind was a controversial figure in the fantasy field, a form of notoriety he seems to have enjoyed. He was an avid follower of Objectivism and its creator Ayn Rand, whom he frequently named as his favourite author. He is the biggest-selling and most popular Objectivist author since Rand herself, and his novels frequently featured lengthy asides where the characters debated Objectivist philosophy. Goodkind also didn't hide his political preferences in his books, in one novel casting thinly-veiled caricatures of Hilary and Bill Clinton as the main villains and showing disdain for pacifists and peace protesters. Several of his novels also featured non-sequitur essay-length discussions of the evils of socialism and communism.

His books initially attracted praise for their action and focus, but this rapidly died away as the series took on a distinctly repetitive and lecturing tone. Goodkind was dismissive of reviewers and, oddly, the entire SFF genre, repeatedly stating that his books were not fantasy because they dealt with "important human themes" and he regarded them as philosophical works. Goodkind's conception of the novels as weighty thematic tomes and the more general reader conception of them as ultraviolent and decidedly kinky pulp fiction were at such variance that it became a source of considerable humour on some fantasy websites; something Goodkind seems to have, oddly, encouraged, perhaps believing there was no such thing as bad publicity.

Goodkind did also experience more negative forms of controversy: he posted a medical report of his own health widely interpreted as mocking a dying Robert Jordan at the time (Jordan profoundly disliked Goodkind and his books, considering them to be sailing a bit too close to the wind of his own work), and in 2018 publicly mocked the cover art produced for one of his novels (leading to a rare apology). He wasn't always combative in his dealings with other authors, and occasionally praised other works of fantasy, noting that he was fan of the Game of Thrones TV series.

Outside of his writing, Goodkind was an amateur racing driver and continued artistic pursuits outside of his work. No cause of death was given. He is survived by his wife, Jeri.

It's fair to say that Terry Goodkind was a controversial figure in the SFF field but one who did bring a different perspective to the genre and seemed to genuinely relish his notoriety.

I am sure he would find this ironic; God bless you Terry Goodkind. I didn't always agree with all your ideas but you sure captivated me and gave some amazing reads.

This is Absolutely the single worst thing I’ve heard in a very long time!!! I’ve enjoyed Terry’s writing for years! My condolences to his wife! 😢

Oh god, it all comes back now: The era of Goodkind trashtalking 15 years ago, with endless circlejerk threads on Chronicles Network and Westeros.org (multi-volume), angry-humorous discussions spinning way out of proportion with whatever fault or merit the original work had.

Innocent times, and yet in some ways an early warning of today's cancel culture.

I found Wizard's First Rule was a refreshing read at the time, better than The Eye of the World, and read up to volume 4 before giving in to all the peers telling me these books were harmful to me. Not tempted to return, though, neither to Sword of Truth, nor to the equally unfinished Wheel of Time.

I just finished the last book of the Wheel of Time again, calling that series unfinished does a disservice to the fantastic job Sanderson did. You deserve to experience the ending of that.

I made it a little further into Good kind's series and, dear Lord, it got baaaad.

Enjoyed the Sword of Truth series as did everyone I recommended it too.

The backlash against Goodkind was nothing to do with cancel culture and everything to do with his poor writing, aggression towards his peers and Objectivist diatribes.
One never stops reading a book because peers tell you not to; the only person that can make you stop is yourself.

I was captivated by Wizard's First Rule and thought Stone of Tears was his high point. It's probably one of my favorite books and introduces fantasy concepts such as the Sliph, Mriswrath Cape, and Sorcerer's Sand among other elements. The next few books begin a rapid decline until Faith of the Fallen, the excellence of which lies in its ability to communicate what makes Objectivism compelling. After that, though, the series descends into hot garbage, with characters standing around impassive as pages and pages of repetitive philosophy are directed their way, and the fantasy setting became an afterthought.

It was obvious he detested fantasy but thought he could hook readers by starting a Wheel of Time epic saga format, using the genre to get his philosophy across, and it worked. The Law of Nines more than proved he wouldn't have been as successful in another genre. Still, Goodkind laughed all the way to the bank, so good for him.

I stuck in there for quite a while but even 20 year old me started to feel that Goodkind's work was very poorly written political agitation a few books in. Even if it had been politics I agreed with I would have found it very heavy handed.

Goodkind also appeared to be, from my point of view, a truly reprehensible human being. One of my pet peeves is how people get sanctified at the moment of death no matter what kind of life they led. No praise for Goodkind from me, even if he is dead and it was a bit premature.

The backlash against Goodkind was good old-fashioned bullying and bandwagon behaviour behind a fig leaf of altruist activism, allegedly fighting the good and neccessary fight to protect society against "his poor writing, aggression towards his peers and Objectivist diatribes" or whatever. The power of being right enabling you to do whatever you want without personal responsibility. This is exactly the same thing as today's cancel culture.

The ability to recognize your past unfair treatment of your opponent is a mark of personal growth. It's been, what, 15 years? Let him go.

Also, a book review site is a strange place to argue that other people don't affect your reading choices.

You make a host of assumptions in your reply.
Firstly, criticising a work is normal. If you liked it all well and good, but to attribute others criticisms to your limited reasons in the way you have is to miss the point entirely. Strawman arguments...
Secondly, to imagine I treated him unfairly and tell me to let it go without any knowledge of me or my actions is both ignorant and arrogant. Don't talk to me about my personal growth; you have no idea what you are talking about.
Thirdly, I didn't say "other people don't affect your reading choices" I said "One never stops reading a book because peers tell you not to; the only person that can make you stop is yourself." Point being, if you like a book, why in the hell would a bad review make you stop reading it?
Now, while reviews are useful, if I like a book, nothing any review says is going to stop me reading it. If you cannot recognise the obvious truth in that... Well, I put that down to you.

I am plodding my way through the whole lot in order, and whilst I do find it a bit preachy at times (I skip over anything too lengthy) I am enjoying the whole series. There is enough of a storyline to make me want to read the next book each time. I skip over the lengthy recaps as well, but I suppose those are necessary if you pick up a book on its own to read. I'm not a book snob and I read quite quickly. Terry Goodkind is no Ursula Le Guin, but I do find his books fun to read. The trick is, just don't take them too seriously.
I have just read naked empire, and the proof reading on that one is not up to the same standard as those before, which can be a little distracting, but not enough to stop me. I shall read through to the final book.

Im reading his series now (again). I don’t think I understood the social commentary in my 20’s. I do now and it’s so relevant to what’s happening today I have to say I think Mr Goodkind was a prophet (likely with both sides of the gift!). Thank you Terry. Rest In Peace