Tad Williams has broken his own record to deliver the longest epic fantasy novel of all time, at least before the editing process is completed. 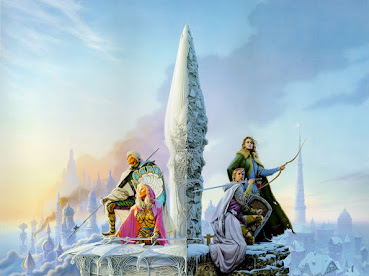 Fittingly, Williams' new, record-breaking novel is the concluding volume to Memory, Sorrow and Thorn's sequel trilogy, The Last King of Osten Ard. The Navigator's Children currently clocks in at "bigger" than To Green Angel Tower.

The novel is being "prodigiously cut" and may end up coming in shorter than the published To Green Angel Tower, but whether that happens or not remains to be seen.

The Navigator's Children is currently tentatively scheduled for release in late 2021, and will be preceded by a short novel called Brothers of the Wind (previously known as The Shadow of Things to Come), which focuses on the backstory of the Storm King, Ineluki, and his brother Hakatri.

CORRECTION: It's been noted that Tad has completed the first draft of The Navigator's Children and is now revising, but has not delivered it to DAW as yet.

Hehe, looks like he's writing yet another four book trilogy. :)

He doesn't need to cut too much for me - I like his long leisurely epics. The publisher may disagree, though.

Brandon Sanderson is getting close to this...his latest Stormlight Archive novel (volume 3 of 10) is 454,768 words, and that was after massive edits to bring it down from much larger.

I for one will never read another Tad Williams novel. Both MST and Otherland were bloated beyond resurrection.

No he has not. A manuscript nobody has seen so far does not count as deliverd. It's a work in progress. No more, no less.

It's not yet complete, so it could be whittled down considerably. But I'm not at all surprised it's a hefty manuscript: all of Tad's final volumes are. Tad readers are used to his "four-book trilogies", by now. Every series has turned into four-book trilogies.

Lol we know Tad just can't do 3 book trilogies. He has too many ideas to fit in. 🙂

The print size on Empire of Grass was tortuously small.

Update: Tad said a few days before this that this book is probably shorter than To Green Angel Tower. https://www.tadwilliams.com/2020/09/newsletter-memo-from-apocalypsifornia/

Also you might want to update the Longest SFF Novels of All Time list by moving Oathbringer to its due place.

Well, having read MST several times and being now engaged with Last King... I would just say that you are missing out if you don’t read these books! I must admit that I am not enamored of Tad’s other books (excepting Tailchaser) , but Memory, Sorrow and Thorn can stand with any fantasy trilogy ever written! So far, having begun Last King of Osten Ard, I am also very happy with the new books as well! I will not say they are equal to MST, but they are very good nevertheless!