Stone of Farewell by Tad Williams

Elias rules as the High King of Osten Ard, but his policies have triggered war between the provinces and civil war within some of them. The continent is slipping into chaos and the only hope may be the mad king's younger brother, Josua Lackhand. Escaping a devastating siege, Josua travels eastwards to find a new stronghold, gathering allies as he goes. Meanwhile, it is said that only three great swords of legend can defeat the machinations of Elias's puppet-master, Ineluki the Storm King. Simon Snowlock has recovered Thorn from a remote mountain, but two of his friends have been sentenced to death by the Qanuc, his own erstwhile allies.

Stone of Farewell continues the story begun in The Dragonbone Chair, and is less the sequel than the simple continuation of that story. Memory, Sorrow and Thorn is really one titanic, 1.2 million-word novel split into three (or four, depending on edition) for ease of publication.

Williams expands and deepens the story in this book, with a more thorough exploration of the various cultures of Osten Ard. In particular, the Qanuc, Sithi and Norns all get more screentime and we learn more about the meadow-people of the Thrithings, the political and religious intrigue in Nabban and how the Hernystiri are surviving in exile.

These elements are fascinating, but also come at the expense of critical plot development and incident. The Dragonbone Chair was itself a relaxed novel, but Stone of Farewell is even more chilled out. Simon spends a long time kicking back amongst first the Qanuc and later the Sithi, Josua's apparently desperate flight to safety has more of the feel of a holiday outing and Miriamele spends altogether too much time hanging out on a boat. It's more the stories inbetween that resonate, with Isgrimnur's increasingly fed-up journey into the south being enjoyable for its brevity and our glimpses into life in the Hayholt (effectively under occupation by Elias's troops) via characters like Rachel and the redoubtable Guthwulf. 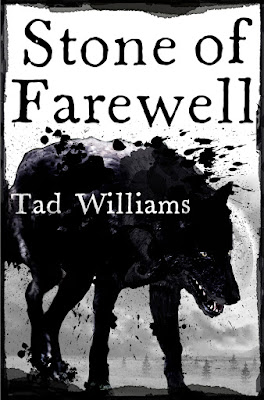 There are moments of real horror when the story kicks into a higher gear, such as Pyrates's confrontation with the Lector or the Red Hand's assault on Jao e-Tinukai'i, but these are relatively few and far between. Instead, the novel expands itself on helping the characters (particularly Simon and Miriamele) grow into more interesting people.

Stone of Farewell (****) is well-written, richly characterised and features moments of real tension and horror. It arguably takes its hands off the throttle at the wrong moment, however, allowing momentum to dissipate a little rather than ramping up for the grand finale. But if you can forgive the slower pace, a fascinating, enjoyable and deeper fantasy novel than most awaits. The novel is available now in the UK and USA.
Posted by Adam Whitehead at 10:13