A KNIGHT OF THE SEVEN KINGDOMS is released

Bantam (in the USA) and HarperCollins Voyager (in the UK) released A Knight of the Seven Kingdoms today. 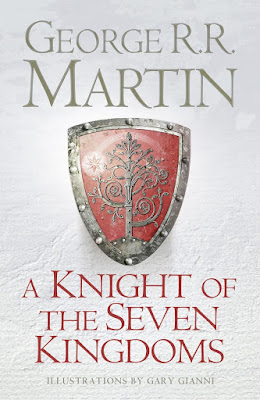 This book is a collection of George R.R. Martin's three Dunk and Egg novellas, short novels spanning a period of time beginning eighty-nine years before the events of A Game of Thrones and expected to conclude approximately fifty years later. The series chronicles the adventures of Ser Duncan the Tall, a hedge knight who rises from obscurity to great fame and high office, and his squire "Egg", who is more than he seems.

The collection consists of The Hedge Knight (1998), The Sworn Sword (2002) and The Mystery Knight (2010). Martin is working on the fourth story in the series, which has the working (but not final) title of The She-Wolves of Winterfell, but he decided some time ago to rework the story. It will not be released until after The Winds of Winter comes out. A working title of the planned fifth story in the series, The Village Hero, has also been disclosed. Martin has said there may be up to a dozen of these stories in total. Existing Song of Ice and Fire characters have appeared in the Dunk and Egg books, such as a very young Walder Frey, whilst Aemon Targaryen has been mentioned, but as the novellas progress and get closer to the present other characters are likely to appear. Fan speculation is high that the final story will take place at Summerhall on the fateful night of Prince Rhaegar Targaryen's birth.

Of course, in the meantime Martin does have two rather large novels to finish.
Posted by Adam Whitehead at 19:28

Email ThisBlogThis!Share to TwitterShare to FacebookShare to Pinterest
Labels: a knight of the seven kingdoms, a song of ice and fire, bantam spectra, dunk and egg, george r.r. martin, harpercollins voyager, news, the hedge knight, the mystery knight, the sworn sword

Do you think that Martin will continue to release future Dunk and Egg stories in anthologies or that from here on they'll be collected in groups of three or so as he writes them? I know Martin enjoys working on the anthologies and I'm sure that the publisher would love that people pay for the same stories twice, but if Martin want to end up with a dozen or so total, compiling that many anthologies could take...a really long time.

I think GRRM is reluctant to devote masses of time to them for obvious novel-related reasons. He also said a while ago that the plan was to alternate them and finish the novels first, and then focus on finishing the D&E stories. There's interviews where he suggests they might get longer towards the end, ending up as short novels rather than novellas, by which time ASoIaF would be done.

Assuming no more expansion to the series, I think we could see She-Wolves between WoW and ADoS and then he can focus on them more with the main books done. If the main series expands, who knows?

I wasn't aware that Martin has hinted on the later novellas being potentially as long as short novels.
Now I'm curious what will happen once TWoW is out. I wonder how many -if any- D&E novellas we should expect to see published before ADoS. If George stays focused on finishing the main sequence and is going to work on the prequels afterwards I wouldn't be surprised if those kept growing into bigger books. Let's see.

Thanks for the response. As much as I'd love him to recharge his batteries with the fourth D&E story between Winds and Dream, I have a feeling he may just want to plow ahead once he sees the light at the end of the tunnel, especially since he's said he regrets not jumping immediately into Winds after finishing Dance.

Even if the novellas do get longer, they're still a fraction of the size of the main novels and far less complex. Even with his notoriously slow writing pace, it's not difficult to imagine him cranking them out fairly quickly once the main series is off his back. It would be extremely ironic if we ended up with Martin having many of the stories written but having to wait for them to trickle out as each anthology is conceived and compiled.