On 20 October 2008 I reviewed the third season of The Wire. I recently completed rewatching the season thanks to the recent HD re-release, courtesy of HBO, and here's the original review with some updated thoughts. 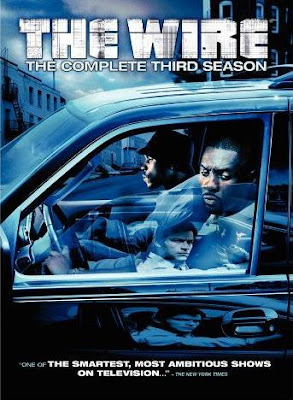 With its third year, The Wire heads back to the streets and unfinished business. As with the second year, the third season opens up another dimension of the city, this time City Hall and the civil and police administration, but the focus is squarely back on the Barksdale organisation and Lt. Daniels' unit trying to bring them down and finish the job begun back in Season 1.

Season 3 opens with Avon Barksdale still in jail, but his parole hearing is coming up. His friend and collaborator Stringer Bell has guided the crew through some lean times and formed a 'co-op' with several other gangs which has led to them making some serious money but at the cost of sharing each other's turf. However, a new player, Marlo Stanfield, is on the way up and is not interested in sharing his territory with anyone else. The stage is set for a series of bloody showdowns and bodies dropping on the streets, to the growing discontent of the police. Lt. Daniels and his unit are forced to drop their investigation into Bell (begun at the end of the second season) to concentrate on the war, unaware that the two are connected. This war is complicated by the re-emergence of Omar Little, who has sworn to bring down Bell for manipulating him into shooting an innocent man (in the second season) and for the murder of Omar's lover back in the first season.

At the same time, an ambitious white city councilman, Tommy Carcetti, is planning to run for mayor, although his prospects in a city with a majority black population seem poor. Connecting these two storylines is a highly controversial initiative launched by police Major Colvin to move the drug dealers off the street corners into three abandoned city blocks where the police will turn a blind eye to their activities so they can concentrate more on murders and crime prevention elsewhere. The 'Hamsterdam' storyline, apparently inspired by the 'legalise drugs' movement, is a stunning and surprisingly even-handed piece of social commentary. There is also an ongoing subplot following the attempts of former Barksdale enforcer Dennis 'Cutty' Wise to go straight after spending fourteen years in prison.

Season 3 is tighter than the second season, as it is able to link the storylines together more effectively. The trials of the Barksdale gang were largely removed and separate from events on the docks, creating a disjointed second year that only started coming together towards the end. The new characters, both on the streets and in the city hall, are also more directly tied to the storylines that have gone before and are stronger as a result.

Thematically, the idea behind Season 3 appears to be that of failed reform. The failure of the city's drug prevention strategies encourage some radical, out-of-the-box thinking from Major Colvin. Whilst his policy is initially successful, it leads to a whole host of knock-on effects which are beyond his powers to address, and give a rather depressing impression that, indeed, no one man can make a difference to the system. The breathtaking cynicism and corruption of the political wing of the city is depicted, with Carcetti determined to reform the system from the inside, again with apparently little hope of success. Stringer Bell's attempts to reform himself and his friend Avon on his release from prison into respectable businessmen provides the season with its main narrative spine, but again does not have a happy ending. That said, there are moments of hope, with Cutty's attempts to go straight finally garnering some success and McNulty's attempts to straighten out his personal life ending on a positive note.

The ending of the season seems to be a little more definitive than the prior two, but the writers take care to leave enough loose ends untied to be pursued into the fourth year, with the candidates for mayor squaring up, several of the gang leaders still very much at large and the police unit once again finding themselves heading off in separate directions.

The Wire: Season 3 (*****) follows up on the first two by being just as dramatically intense with some superb characterisation, brilliant acting and some finely-judged moments of comedy to balance the darkness elsewhere. It is available on DVD in the UK and USA, and as part of the complete series box set (UK, USA). 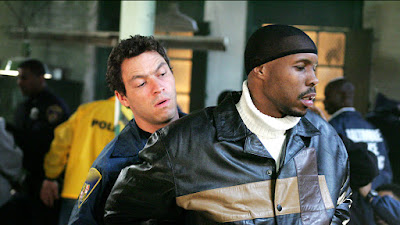 Rewatching the third season of The Wire, it's impossible to see its message as being anything other than "Be careful what you wish for..."

The season is dominated by McNulty's dogged pursuit of Stringer Bell, his determination to finish the work begun back in Season 1 when Avon was arrested. Avon's unexpected early release halfway through this season only reinforces McNulty's mission. On an initial viewing - especially knowing that David Simon thought there was a good chance this was the final season of the show and wanted to bring at least some resolution to things - this worked well. On a reviewing, knowing what happens next, it's downright brilliant.

Stringer and Avon's downfall paves the way for the rise to power of Marlo Stanfield, a scarily focused and utterly relentless psychopath lacking even the facade of honour and civility that Avon had and the business common sense possessed by Stringer. This makes you want either the detail to fail in their mission to defeat the Barksdale crew, or for them to hold off just long enough for Avon's people to win the street war. Of course, it doesn't happen. More tellingly, it's interesting to see Avon's growing respect for Marlo and his tactics over the course of the season, seeing something of himself (perhaps incorrectly) in the young Stanfield. This explains Avon's decision to help Marlo from behind bars in later episodes, which on a first viewing came a bit more out of left field.

Foreknowledge of later seasons also makes other story points resonate much more strongly: Cutty's personal odyssey from criminal enforcer to boxing mentor, Colvin's desire to give something back to the community (and not just for the sake of his pension, as he protests) and, most prominently, Prez's ill-advised mistake in the final episodes which completes his police story arc begun in the first season and sets him on the road to the schools, and the tragically powerful fourth season.

Season 3 of The Wire, already one of its strongest years, improves immeasurably on a reviewing and is also enhanced by its presentation in HD. If you thought Hamsterdam at its worst was hard enough viewing before, it's got nothing on when every nook and cranny is shown up in widescreen.

The Wire complete series blu-ray set is available now in the UK and USA.
Posted by Adam Whitehead at 13:21

Season 5 is the only season I like less than season 5. I, for one, wasn't excited to return to a focus on Avon and Stringer. Marlo Stanfield and Carcetti were brilliant storylines, but really come into their own in season 4 (which competes with season 2 for my favorite season).