A History of Epic Fantasy - Part 15

One of the criticisms levelled against epic fantasy and some of its trappings - worldbuilding, magic systems, maps, constructed languages - is that it runs counter to the more traditional idea of fantasy as being strange, exotic, weird. East of the Sun and West of the Moon is not a point on a map (to quote Pratchett expert Stephen Briggs) and knowing the metaphysical rules that allow a princess to be put into suspended animation for a century only to be woken up by a passing prince is a bit unnecessary to the story at hand.


There's also the fact that an awful lot of fantasy can feel like a history of the real Middle Ages but with dragons and fireballs replacing research. Starting in the 1980s, some authors wrote books that looked like epic fantasy and had many of the same trappings, but had rather different settings and were combined with other genres to create more interesting and original stories.


As a child, Stephen King developed a fascination with the poem Childe Roland to the Dark Tower Came (1855) by Robert Browning. This was one of a number of poems and poetic works that would stick in the minds of various science fiction and fantasy authors, to be extensively quoted later on (see also The Second Combing by W.B. Yeats and The Waste Land by T.S. Eliot). King's take was rather more literal: a man named Roland seeks out a dark tower. Working out exactly what that meant took King over a decade, with him writing down the first version of the short story known as The Gunslinger in 1970. He finally published it in 1978. A series of four further short stories followed, with them being collected together and published as one volume in 1982.

When The Gunslinger appeared, King was already a rising star. He'd published Carrie, 'Salem's Lot, The Shining, The Dead Zone and the novel that had arguably defined him more than any other, The Stand. The Stand is itself a work of epic fantasy using modern American characters to stand in for archetypal fantasy heroes and the destruction of the modern world through a viral epidemic as its backstory. North America itself stands in for a fantasy landscape, with Las Vegas serving as the novel's Mordor. The novel was hugely successful, but some readers felt that there was a lot more to its mysteries - such as the enigmatically evil Randall Flagg - than King revealed on the page.

In the back of King's mind (perhaps influenced by Moorcock) had been the idea of a multiverse, a layering of fictional universes in which different stories could take place but where all these stories could intersect with them. What he lacked was a way of tying them together. The Gunslinger, with its ambiguous setting and the ability of its characters to pass between shifting planes of reality, provided that mechanism.

Seven more volumes in The Dark Tower series followed The Gunslinger: The Drawing of the Three (1987), The Waste Lands (1991), Wizard and Glass (1997), Wolves of the Calla (2003), Song of Susannah (2004) and The Dark Tower (2004), along with a stand-alone spin-off novel, The Wind Through the Keyhole (2012). The novels focus on Roland Deschain, a knight and gunslinger who pursues a mysterious "man in black" across a desert, gathering allies along the way. There are hints of a post-apocalyptic world, strengthened by references to The Stand and its characters. Real-life figures, including (controversially) King himself, make an appearance. Many other novels King wrote during this period tied into the main work: The Eyes of the Dragon (1987) is King's only "traditional" epic fantasy novel and features the return of Randall Flagg and references to The Dark Tower. Black House, Hearts in Atlantis, Rose Madder and Insomnia (among others) also feature blatant references to the series. In fact, some King fans suggest that all of King's work (even the non-supernatural thrillers like Misery) is set in the Dark Tower multiverse and they may be right. 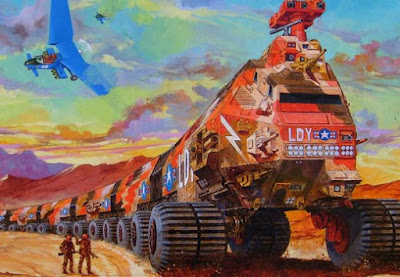 Patrick Tilley had already had an interesting writing career before he started writing his magnum opus in 1983. His first novel, Fade Out (1976), had been an SF novel about the arrival of an alien spacecraft on Earth that drained the planet of electricity, throwing us back into the Middle Ages. His second, Mission (1981), had asked what would happen if Jesus turned up in present-day New York City.

For his next work, Tilley decided to fuse together Mad Max, Shogun, The Lord of the Rings and the American Western because, well, why not? The resulting series was The Amtrak Wars, the kind of inspired, crazy genre mash-up that we don't seen nearly enough of in the genre.

The books open in 2989. The Old World was destroyed in a nuclear apocalypse (which took place in, er, November 2015) but a group of American industrialists and billionaires survived in a massive underground shelter beneath Houston, Texas. With the surface world too radioactive to survive on, they expanded the underground facilities into a vast subterranean empire, the Amtrak Federation. Emerging centuries later, they found to their horror that the surface world had been taken over by "Mutes", the mutated survivors and descendants of less fortunate Americans who'd had to struggle to survive after the thermonuclear war. The Federation initially waged war against the Mutes to retake the surface world, but ran into problems when it was discovered that the Mutes had somehow gained mastery of the elements and magic. Complicating matters further was the presence of a large nation of descendants of Japanese survivors on the eastern seaboard, Ne-Issan.

The books chronicle the development of the Talisman Prophecy, which the Mutes believe will see the destruction of the Amtrak Federation, and the role played in it by four young people from both the Federation and the Clan M'Call of the Mutes. The books are also notable for their vivid action scenes and extraordinarily complicated politics and schemes-within-schemes developed by the central character, the Machiavellian antihero Steve Brickman.

Six volumes were published in the series: Cloud Warrior (1983), First Family (1985), Iron Master (1987), Blood River (1988), Death-Bringer (1989) and Earth-Thunder (1990). The sixth volume ended on something of a cliffhanger, intended to lead into a sequel series set 15-20 years later when the Talisman Prophecy came to fruition. However, Tilley chose to move onto other projects. There was a renewed attempt to continue the series in 2007 with a new trilogy, whilst an Australian production company licensed the film rights in 2010 with a view to making a movie called The Talisman Prophecy, but neither came to fruition. Still, the series remains remarkable for the ease with which Tilley brings together a myriad number of sources and ideas into a coherent world and story. 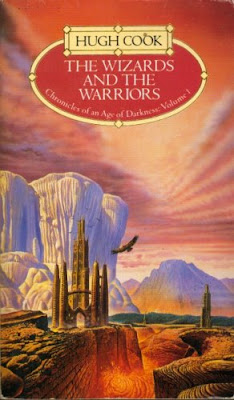 The Wizards and the Warriors

Unusually, the series was not one massive epic story. Instead, it was more episodic with some novels taking place simultaneously alongside others, with events varying depending on who was witnessing or instigating them. The books used unreliable narrators and a prose style that could vary significantly from volume to volume. The books also eschewed a lot of epic fantasy tropes, with the books not following a set chronology and not having a central hero or villain. The books featured whimsical humour and influences from sword and sorcery as well as planetary romance. Some books were reminiscent of the later New Weird movement (China Mieville was a big fan). Some books were more like roleplaying games, with Paizo Publishing reprinting one of the volumes, The Walrus and the Warwolf, as part of its Planet Stories line.

After the series concluded (prematurely) Cook published several more books before sadly passing away in 2008 from cancer. His massive mega-series was never finished, but its breadth, vision and general batshit insanity remain intriguing (and echoes, intended or not, of the tonal variations, dark humour and continent-skipping structure can be found in Steven Erikson's Malazan novels). 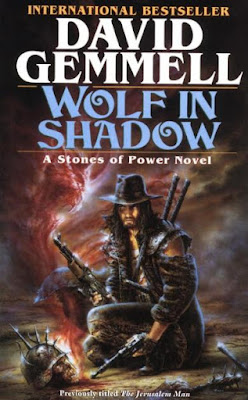 We have already looked at Legend, David Gemmell's first novel, published in 1984. Gemmell subsequently produced several more books in the same setting and he was soon being pigenoholed as a heroic fantasy author.

In 1987 he shifted that perception with Wolf in Shadow (sometimes published under the title The Jerusalem Man). This was a post-apocalyptic novel, set in a world devastated by an unspecific event known as "The Fall". An episode later in the novel has the titular Jon Shannow, a gun-wielding antihero, discovering the wreck of the Titanic, indicating the action is set on the now-bone-dry floor of the Atlantic Ocean. The novel and its two sequels featured post-apocalyptic tropes combined with fantasy, particularly with the introduction of the Sipstrassi or Stones of Power, items with magical capabilities.

The core series featuring Jon Shannow is among Gemmell's most popular works, but it was later expanded with a duology set in ancient Greece and featuring Alexander the Great. The duology initially appears to be historical fiction, but the introduction of the Sipstrassi linked it to the Jon Shannow books and hinted at a grander, weirder scheme in place. Gemmell later returned to his Drenai setting and several new fantasy worlds before concluding his career with pure historical fiction, so it is unclear how this series would have continued. 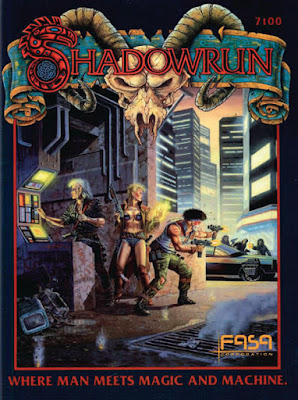 Released in 1989, the roleplaying game Shadowrun has a central premise which it executes very well: epic fantasy meets cyberpunk.

The roleplaying game and its attendant video games and novels postulate an existential catastrophe which takes place in 2012. The world is transformed, with some of the human population transformed into fantasy races like elves, dwarves, trolls and orks. Magic also suddenly comes into existence, other planes of existence are revealed to exist, allowing demonic entities and dragons to enter our world. Despite widespread death and destruction resulting from the catastrophe, humanity manages to survive and prosper, with technological advancement proceeding and the new races integrated into human culture.

The roleplaying game is set fifty years further down the line, with massive mega-corporations controlling the world and people surviving best they can. The game focuses on "shadowrunners", freelance agents who act as corporate spies, soldiers of fortune and mercenaries, working for themselves or corporations or underground resistance groups.

In Shadowrun's case, the mashing together of epic fantasy races, tropes and magic with science fiction and cyberpunk is wildly successful, bringing both a sense of fun from simply colliding the two worlds together and also allowing the creators to investigate themes of technology versus spirituality in unusual ways. After a lengthy period of relative quite, Shadowrun recently exploded back into popularity with the release of three new video games, Shadowrun Returns, Dragonfall and Hong Kong. Its future seems bright.

The mashing up of fantasy with SF and other genres has generated interesting results, although success and sales have often been patchy when this has been attempted. The once exception is historical fiction, which epic fantasy has riffed on with frequent and ongoing success.
Posted by Adam Whitehead at 18:21

So much wonderful info. So many intriguing stories! Why didn't I know any of this?! Thank you