The third manned mission to Mars goes catastrophically wrong when the team are hit by a powerful storm. Most of the crew manage to reach their spacecraft and escape, but astronaut Mark Watney is apparently killed. However, Watney survives. He is able to ensure his short-term survival by reaching the team's abandoned habitat, but he now has to survive potentially four years with extremely limited supplies and resources. When NASA realises that Watney has survived, they begin preparing a rescue mission, fighting the limitations of budgets, science and politics all the way. 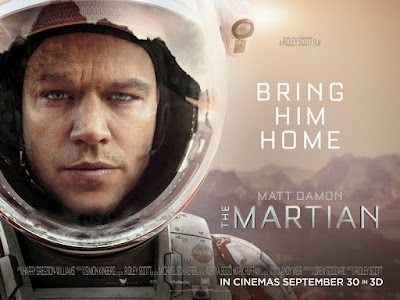 The Martian is director Ridley Scott's adaptation of Andy Weir's critically-acclaimed 2011 novel. This is a hard science fiction movie following in the footsteps of films such as Gravity and Interstellar of at least attempting a more plausible and realistic view of space travel.

Ridley Scott's recent career has been patchy, with his 2012 movie Prometheus in particular attracting criticism for its inconsistent script and unrealistic portrayal of how humans would act and react in space. The Martian feels, in part, like an apology for that film. In fact, it's probably Scott's strongest movie since Gladiator. The script (by Drew Goddard) is relaxed and witty, and the tone kept deliberately light in places rather than dwelling on the existential gloom of Watney being trapped alone, millions of miles from the nearest human being and cut off from real time communications with home.

In terms of science, the movie is mostly plausible apart from a couple of issues. The film makes a deliberate choice not to replicate the effects of the low gravity on Mars (which is only one-third that of Earth). Whilst making shooting easier, it's a bit of an odd choice in a movie that spends so much time dwelling on the scientific challenges of a mission to Mars and also makes indirect use of the lower gravity in other parts of the film in sequences showing the various transfer craft launching from the planet. The other issue is that the ship that actually travels between Earth and Mars, the Hermes, is shown as being improbably large, sophisticated and even luxurious. But showing the likelier reality of the crew huddled in a fairly small vessel for months on end would be less impressive. Also, the storm seen at the start of the movie simply wouldn't happen in the way it does.

These issues can be bourne for the successes elsewhere. The cast is excellent, from Damon's marooned astronaut to Jessica Chastain, Jeff Daniels, Chiwetel Ejiofor and Sean Bean leading the attempts to rescue him (Bean even gets a Lord of the Rings joke as a sly nod to the audience). Able support is provided by Michael Pena, Kate Mara and Benedict Wong. More impressively, the film knows how to deploy its talent to maximum effect, meaning that the familiar name-heavy cast never feels muddled or stuffed. Indeed, some actors like Sebastian Stan and Donald Glover put in solid, nuanced performances in impressively limited screen time, leaving you wanting more.

But the film's focus stays on Damon for most of the film, showing how he deploys humour and resolve to overcome the nightmare predicament he finds himself in. The film's commitment (a few forgivable lapses into movie illogic aside) to real science and its cooperation with NASA makes for an authentic-feeling, positive story. It may be too idealistic - the Chinese give up an important technical secret a bit too easily and the film occasionally feels like a recruiting tool for NASA - but it's good to see a film suggesting that humans can be better than they are now and showing that we can achieve the impossible, at a price.

My only real issue with the movie was the romantic plot introduced towards the end. It seemed shoehorned in to me, considering that all the interpersonal relationships up to that point had been very professional and platonic ones.