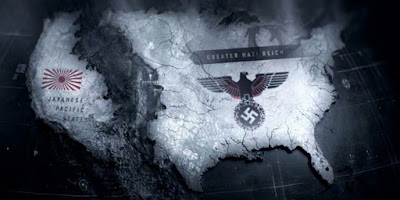 The Man in the High Castle is based on Philip K. Dick's classic novel of the same name, in which the Germans and Japanese won World War II and occupied the North American continent. Twenty years later, the two former allies are now rivals and an increasingly frosty cold war between the two is in danger of turning hot. Meanwhile, a burgeoning resistance movement is bolstered by the discover of news footage which shows a different outcome to the conflict.

The first episode was a huge success when released earlier this year as part of Amazon's pilot project, getting the largest audience, the strongest critical acclaim and the largest number of votes in the project's history.

ETA: Apparently there are regional restrictions (for Amazon's own content, for some reason) and you need to install a Silverlight plugin to make it work.
Posted by Adam Whitehead at 13:13

'Install the free Silverlight plug-in; it will just take a minute.'

haha how about no

Okay, so, apparently you can play videos on Amazon without Silverlight if you use Chrome. So I tried that.

Thanks for nothing, I guess as a non-Anglosphere subhuman I will have to stick to torrenting and never giving you dumb fucks my foreign money that you obviously do not want.

Why the fuck does Amazon have LICENSING RESTRICTIONS on THEIR OWN CONTENT? It's not like they're beholden to some fucking Big Hollywood entity here. Why? Do they hate making money? This is so fucking retarded.

I am able to watch it in Safari. Not Chrome.

And I get bikini ads on the blog recently. I can understand books and games and such, but the pieces of lacey nothing girls are supposed to wear, why that?

Just blocked those. You have quite fine control over what you can allow in the ads, so I've done another sweep to block stuff out. Most of the things I get coming up are ads for ebooks and Fallout 4-related stuff, which kind of makes sense.

Thank you. Yeah, I can understand ads that are somehow connected to the content of the blog. But the bikinis weren't even chainmail. *grin*

Do the ads make for a bit of an income? I've never considered it for my blog, but I don't have that many readers. I'd probably have to change the template as well and I've spent enough time to edit the code of the one I got since 2005, so I'm going to keep it.

Well if you don't live in the UK you'll need to go to you're countries Amazon site to watch the video. It's not that difficult of a problem to figure out...

In theory the ads should be based on viewing history. It never quite seems to work out like that though :)

It's looking like about £20 for the first month, which isn't that much (the new UK minimum wage is about £1,250 a month, for comparison) but it's also a reasonable night down the pub or maybe 2.5 paperbacks so better than nothing :)