Guillermo Del Toro's next flick was supposed to be Pacific Rim 2, the sequel to his 2012 mech-vs-monster action movie. Although only a modest success in the United States, it was a strong worldwide hit and the movie had been greenlit to begin shooting in the New Year for a 2017 release.

Unfortunately, the movie has run afoul of a political game of football between the production company, Legendary, and the studio releasing the film, Universal (Warner Brothers released the first film, but Universal has inherited the sequel). The two publicly remain committed to the film, and Guillermo Del Toro has said he wants Game of Thrones actress Maisie Williams to join the cast, but it now has no production or release date. 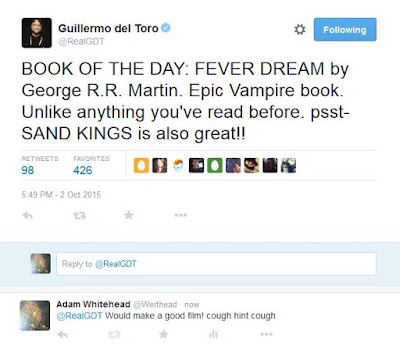 Del Toro has also indicated he may put another film into production before Pacific Rim 2. There is no word on what the film may be, but Del Toro has been talking recently about some of his favourite vampire and horror books, including Alone with the Horrors by Ramsay Campbell, The Vampire Tapestry by Suzy McKee and Fevre Dream by George R.R. Martin. With Del Toro producing The Strain, a TV series about vampires (or, more accurately, vampire-zombie hybrids), it may be less likely that his next work will again be about the undead bloodsuckers, but if so he's got some great inspiration going on.

He also mentions Martin's Sandkings, an SF short story that was, prior to A Song of Ice and Fire, probably Martin's best-known work. It was previously filmed (in a very different form) as the first episode of the newer The Outer Limits in 1996, but a more faithful, big-budget feature film version would be brilliant.
Posted by Adam Whitehead at 14:56

Personally I'm not the biggest fan of Fevre Dream, but I am interested to see what Del Toro might do with it, especially if he's given free rein to rework the story. A bad third act/ending (which is something that FD most definitely has) can really torpedo a story that was doing fine up to that point.