New poster for THE FORCE AWAKENS 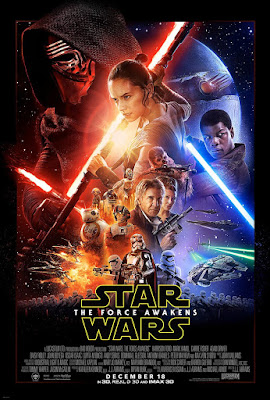 The poster still lacks the "Episode VII" subtitle, which many were expecting to appear on the final version, but it's definitely dramatically appropriate and in keeping with the tone of the trilogy.

The poster also gives us another look at some of the new hardware in the trilogy, such as the new generation of X-wings and TIE fighters, the slightly modified Millennium Falcon and, in the top-right, what appears to be a new Death Star-esque space station or weapon.

More will be revealed in a new trailer, due to hit tomorrow, and of course the final film which is just eight and a half weeks away.
Posted by Adam Whitehead at 18:02

I dunno, that thing in the top right looks more like a moon.

The Death Star is in danger of becoming the series Swamp Castle if they're not careful:

The Empire will get there eventually ;-)

Is Luke on there anywhere?

Slightly upset and the lack of Luke. We get han chewie and lea in the trailer but no luke there or on the poster. What's going on?

I'm pretty sure Luke is in the trailers. He's the hooded guy who puts his robo-hand on R2.