Scott Bakker's UNHOLY CONSULT split, to be published in 2016

Overlook have confirmed that the concluding volume of R. Scott Bakker's Aspect-Emperor series, itself only the second of three series in the Second Apocalypse mega-series, has been split in half due to length. The two new volumes, entitled The Great Ordeal and The Unholy Consult, will conclude the Aspect-Emperor series. 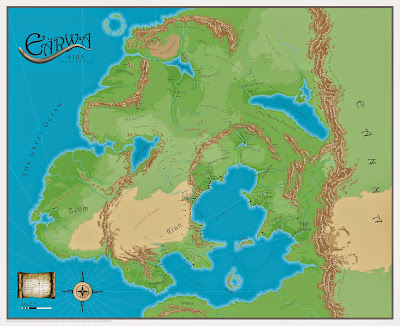 Bakker himself voiced this possibility a few months ago, when disclosing that the novel clocked in north of 300,000 words even before he added a substantial appendix to it. After a lengthy and odd delay after he submitted the novel for publication, Overlook finally confirmed they were moving ahead with publication plans three months ago.

The Great Ordeal will be published on 5 July 2016. The Unholy Consult will follow, likely between six and twelve months later.


Praised by fans and critics worldwide, R. Scott Bakker has become one of the most celebrated voices in fantasy literature. With The Great Ordeal, Bakker presents the long-anticipated third volume of The Aspect-Emperor, a series that stands with the finest in the genre for its grandiose scope, rich detail, and thrilling story.

As Fanim war-drums beat just outside the city, the Empress Anasurimbor Esmenet searches frantically throughout the palace for her missing son Kelmomas. Meanwhile and many miles away, Esmenet’s husband’s Great Ordeal continues its epic march further north. But in light of dwindling supplies, the Aspect-Emperor’s decision to allow his men to consume the flesh of fallen Sranc could have consequences even He couldn’t have foreseen. And, deep in Ishuäl, the wizard Achamian grapples with his fear that his unspeakably long journey might be ending in emptiness, no closer to the truth than when he set out.

The Aspect-Emperor series follows Bakker’s Prince of Nothing saga, returning to the same world twenty years later. The Great Ordeal follows The Judging Eye and The White-Luck Warrior, and delivers the first half of the conclusion to this epic story. Returning to Bakker’s richly imagined universe of myth, violence, and sorcery, The Aspect-Emperor continues to set the bar for the fantasy genre, reaching new heights of intricacy and meaning.


Just got back to find there’s been some developments! I’d resolved to say nothing anticipating anything–it just makes me feel foolish anymore. Until we have all the details hammered out, there’s not much I can say except that Overlook’s July 2016 date is tentative. I fear I can’t comment on their press release, either. Things seem to be close, though.

I know it’s been a preposterously long haul, folks, but hold on just a bit longer. The laws of physics are bound to kick in at some point, after which I can start delivering some more reliable predictions.

Was really hoping for an earlier release. For me personally nothing comes close to Bakker in Fantasy. The bleakness so many people dislike about the series is what makes it so special for me.

This news really dampens my excitement. The Judging Eye and White Luck Warrior were already too long for their own good, particularly since neither of them were great books (The White Luck Warrior's first 2/3rds are great, and then it takes a real quality nosedive, IMO). Hopefully this will still be good, but I'm getting pretty tired of epic fantasy authors having next to no control of their stories (Abercrombie and Abraham excluded).

I find I'm enjoying Judging Eye more on the reread, caligula_k23, but I know what you mean. Still, I thought Thousandfold Thought was too rushed, so what do I know. I'm more annoyed about the length of time it'll take for any of this to come out, I'd planned to re-read the series to date over this year in prep, and I'm going to be finishing White Luck more than six months before this comes out, assuming (blithely and naively) there are no further delays.