On 14 October 2008 I published a review of the second season of The Wire, HBO's masterpiece about the corrupting effects of American institutions (political, legal and criminal) and the destruction of the American labouring classes. Here's an updated re-review based on the new HD release of the series on Blu-Ray. 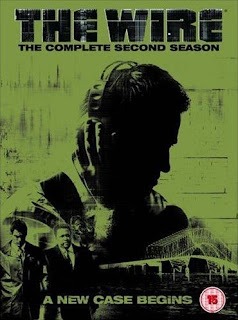 When The Wire started it was easy to see it as just another cop show, until its overwhelmingly high quality lifted it onto another level. After all, the narrative of Season 1 was simply that of cops versus drug dealers, with some murky political dealings on the side but these were left relatively unexplored. Season 2, however, shows creator David Simon's real plan: he is trying to craft the definitive portrayal of the turn-of-the-century American city. Like a Grand Theft Auto game (only with less gunplay and more, infinitely better dialogue), progressing onto Season 2 'unlocks' another chunk of the city, this time the docks and a new cast of characters, including Eastern European criminals, the unions and their families, and introduces an important new thread to the tapestry of the show.

At the end of Season 1, Lt. Daniels's unit successfully cracked the Barksdale case, but political infighting between different police departments saw arrests made prematurely. Whilst Avon and D'Angelo were sent down, the evidence against Avon was flimsy and his time inside was limited, whilst back on the street the formidable Stringer Bell has been put in charge. Meanwhile, Daniels has been booted down to work in the evidence lock-up and McNulty has been sent over to the harbour patrol, to his extreme annoyance, whilst Freamon and Bunt are working in homicide. When McNulty fishes a dead girl out of the harbour and port authority police officer Beadie Russell uncovers thirteen corpses in a freight container, the police's attention is turned to the harbour. This garners the interest of Commander Valchek, who is anxious to bring down the head of the stevedores' union, Frank Sobotka, after his union raises more cash for the local church's new stained-glass windows than Valchek's.

The Wire: Season 2 (*****) takes slightly longer to get going than Season 1, but remains gripping, intelligent and adult television and the climax is much harsher. It is available on DVD in the UK and USA, and as part of the complete series box set (UK, USA). 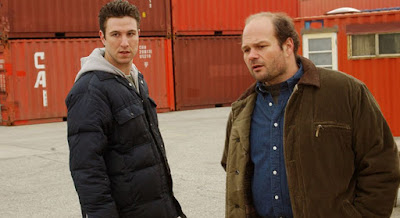 If you want to start a flame war between usually reasoned, intelligent fans of The Wire, you can challenge them on what is the weaker season: the second or the fifth. The results can be quite interesting. Of course, they're both fantastic, but I think most would agree they're a tiny notch below the other three in quality. The move away from the established cast in Season 1, the introduction of a lot of new characters with time limitations on fleshing them all out and the lack of resolution to the storyline about the Greek and his gang of criminals are all issues when compared to the first season's flawless pacing, characterisation and plot construction.

At least, they are on an initial viewing. On a re-watch, the season improves from being pretty damn good with a few minor issues to being almost the equal of those around it. Knowing how the Greek and his dealings play into the bigger story of Baltimore from the later seasons helps a lot, as it introduces more of an element of tragedy into proceedings: if the cops had arrested the Greek and his gang, a lot of what happened in the seasons that followed would not have been possible. Similarly, the elimination of D'Angelo feels like a mere tying-up of a loose end from the first season, but in fact sets up a series of plot points and events in Season 3 that will have huge ramifications.

In fact, few elements are not improved by a rewatch. James Ransome's performance as Ziggy still feels a little belaboured in some scenes, but beyond that, this is a collection of highly watchable, smartly-written, brilliantly-acted and often unexpectedly hilarious episodes.

The move to HD also benefits this season immensely, with so much of the action taking place in huge industrial wastelands, on container ships and against other, large-scale backdrops which are improved by the move to widescreen.

The Wire complete series blu-ray set is available now in the UK and USA.
Posted by Adam Whitehead at 10:04

No flame war here but I don't agree with you when you say that season 2 is one of the weaker seasons, even on an initial viewing. Im my experience most Wire fans put season 2 as the the best season or 2nd best behind season 4. For me the mucky end to the investigation adds value to the season rather than takes away from it. It shows how the good guys don't always win and sometimes they lose very badly and that's the whole essence of The Wire for me.

It does take a while to get into the new characters, especially Ziggy (the duck scene helps), but Frank Sobotka's road to hell is gripping to watch. I still can't believe it's the same actor as that bloke in True Blood...

Season 5 is definitely the weakest season, owing to the fake serial killer plot being just too contrived for The Wire, in my opinion.

Season 2's only flaw, in my opinion, was not investing us enough in the port characters. I found the constant bar scenes with the port guys tedious.

I am also astounded at people who consider season 2 to be among the weakest. It is, with season 4, the best "The Wire" gets to be. (Season 1 and 3 are on equal footing after those two, and season 5 is the worst-thus only very good.)