For centuries the nations of Nasheen and Chenja have fought a gruelling, deadlocked war. Millions on both sides have been killed by airbursts, poison gas and hostile swarms of insects. Now peace has come. Hundreds of thousands of young men and boys have returned home to the cities of Nasheen to find that their female rulers don't know what to do with them, but still expect them to obey. A movement for equality and representation is building, spearheaded by a mysterious figure. Retired bel dame Nyx is "persuaded" out of retirement to deal with the problem. Her mission will involve crossing a vast desert to unknown lands, a chance meeting with old friends and the final hope that she might find some peace at last. 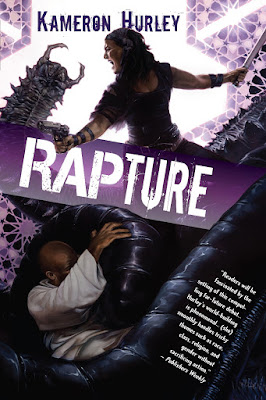 The Bel Dame Apocrypha series has done increasingly interesting and original things with each volume. Overall, the series is a curious mix of fantasy and science fiction, set so far in the future that technology and magic have become indistinguishable and a "fallen" race of humans, divided internally by religion and ideology, must make use of them to survive on a hostile, only partially-terraformed planet. The SF elements work because they are subtle and kept in the background, and overall the "bugpunk" theme is sold because the author commits to it, making her weird concepts convincing due to how the characters treat them as ordinary.

God's War was an accomplished debut, benefiting from a razor-sharp sense of story but being a bit rough around the edges. Infidel was superior, a brutal (even traumatising) novel that was incredibly powerful but made you wonder if the author should be hauled before an international tribunal for the mistreatment of fictional characters. Rapture retreats a little from being that hardcore - although it's certainly not a happy novel - and instead shifts to being a more detailed and in-depth exploration of the world and history of Umayma and how it will develop going forwards. 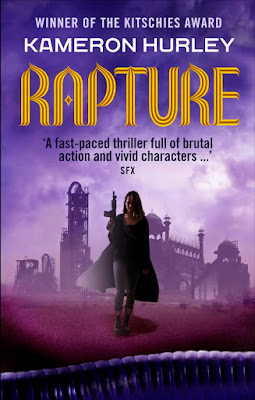 It's a remarkable book, driven by anger and fury and burning intelligence. A lengthy crossing of a hostile desert made me draw comparisons with Mad Max: Fury Road (although Rapture predates that film by three years), not for the plot but for its sense of purpose. We learn more about the world and what's going on in remote areas, but the book remains focused on the characters and how they relate to one another. The final collapse of relationships long tottering on the edge is sad, but also inevitable and then horribly liberating, in a way that's true to life.

The book is mainly concerned with its own storyline, but finds time to wrap up long-standing plot threads from earlier volumes. Indeed, characters and arcs established in earlier volumes which felt a little disconnected from Nyx and her team are here tied into the main storyline with great skill. It's not a neat ending to the series - and there is at least one large dangling plot thread that potential sequels could pick up on - but it does bring about enough satisfying resolution to work if there is never another Bel Dame novel.

If the novel does have some weaknesses it might be that some of the desert sequences in the middle do drag on a long time when the book's finale (which involves crossing the entire continent) is squeezed into a few too few pages, feeling rushed to the edges of incoherence. But the author just about manages to carry it off, producing an ending that's epic, spectacular and wonderfully messy.


Rapture (****) is a readable, finely-characterised and highly imaginative novel, brimming with wit and attitude. It is available now in the UK and USA.
Posted by Adam Whitehead at 11:18