THE LAST KINGDOM gets UK airdate

The Last Kingdom, the BBC drama based on Bernard Cornwell's Saxon Stories, will debut on BBC2 on Thursday 22 October at 9pm. 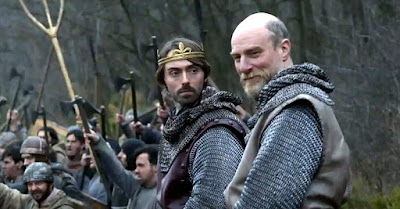 For unclear reasons, the drama is airing first in the United States starting this Saturday on BBC America. The drama has also received a massive amount of marketing support from BBC America, including an excellent website and plenty of trailers and featurettes. The BBC press for the show in the UK has been virtually non-existent in comparison. The airdate and time is also not particularly exciting: this should really be a prime-time Sunday night show airing on BBC1, given its clearly large budget and appeal.

Despite the BBC's baffling (but not unprecedented, as anyone who can recall the shabby handling of Rome can attest) treatment of the show, it's building up some good advance press in the States, with Variety giving the first episode a glowing review and proclaiming it the equal of Vikings and much better than the similarly-themed Bastard Executioner. Den of Geek also has a positive review.
Posted by Adam Whitehead at 21:41

I would love to see a show about Rome set basically any time during the 3rd Century Crisis or during the Punic Wars or during the collapse of the Western Empire. Rome is always a great subject for a show. Also, little known fact, movies and shows about Rome cause British Actor Unemployment to fall to almost nil during production. I'm looking forward to this one, Cornwell is such a readable writer.

Just picked up The Last Kingdom tonight! I hope to have it read before the show! It's my first Cornwell novel and I can't wait for the show, the trailers have all been awesome so far. If it's better than Bastard Executioner it's going to be great!

Looking forward to this.