Two new screen adaptations of science fiction franchises have been announced in the last couple of days. 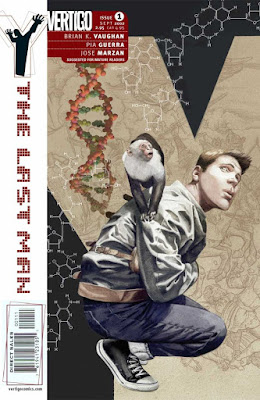 First up is an old project. James Cameron optioned the Battle Angel Alita manga a long, long time ago. At one stage he was torn between making a Battle Angle Alita movie or Avatar, eventually plumping for the latter. With Avatar II, III and IV likely to keep him busy for the next decade or so, he's clearly decided not to sit on the other property and has decided to produce it for another director. Robert Rodriguez will instead helm the movie for 20th Century Fox. No release date has been set, but I'd be surprised if we saw this any sooner than 3-4 years from now.

Much more imminent is an FX TV series based on Y: The Last Man. This graphic novel series about the last two surviving male mammals on the planet was a huge hit during its 60-issue run for Vertigo from 2002 to 2008. It launched the career of Brian Vaughn, who has gone on to work in television on Lost and Under the Dome before recently returning to comics with the massively successful Saga. Vaughn himself will produce and write the Y: The Last Man TV show, which he has suggested will both adapt and expand on the comics.
Posted by Adam Whitehead at 20:40

Y: The Last Man will be a hard sell. "Last Man on Earth" already beat it to the punch

As long as they don't mess with the ending, Y will be brilliant.