A History of Epic Fantasy - Part 21

The Wheel of Time may have sold more copies (because it's three times the length), but A Song of Ice and Fire, by every available metric, has more actual readers than any epic fantasy series since The Lord of the Rings. Whilst the massive success of the HBO television adaptation, Game of Thrones, has driven this success, the critical acclaim given to the series has also been unusually laudatory over a very long period of time. So, as we have asked before, what factors have given the series its immense appeal? 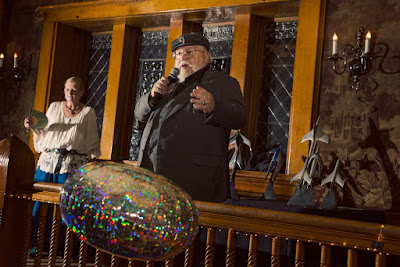 George R.R. Martin (and his wife Parris, the True Power Behind the Throne) with his Alfie Awards, presented at the 2015 Worldcon.

Fantasy From a Fan

As George R.R. Martin will tell you every time he gets the chance, he was a fan of science fiction, fantasy and historical novels a long time before he wrote his first story. He grew up reading Clarke, Heinlein, Howard and Vance, delved into Tolkien as a teenager and spent the 1970s and 1980s reading almost everyone of note in the field. A regular attendee of the World Science Fiction Convention (Worldcon), he regularly read every novel on the shortlist for the Hugo Awards. At different times he also took part on panels, organised events and edited anthologies. Other fantasy authors may have been fans of the genre, or aspects of the genre, but almost none were as deeply immersed in it and in fandom as Martin was.

The result is that A Song of Ice and Fire wears a lot of influences on its sleeve, from Dune, The Lord of the Rings, The Dying Earth and The Chronicles of Amber through to Memory, Sorrow and Thorn, the first two volumes of which Martin had read before starting work on A Game of Thrones. But as well as being an avid reader of SFF, Martin also enjoyed historical fiction. He was a fan of Dorothy Dunnett and Bernard Cornwell, as well as French writer Maurice Druon. Druon's Accursed Kings sequence, about murderous intrigue in the French court in the 14th Century, was particularly influential. The result is a fantasy series that is a mishmash of sources and influences, streamlined into one cohesive whole by an experienced and seasoned writer. If Martin had attempted to write this series at the start of his career in the 1970s, it certainly would not have worked as well. 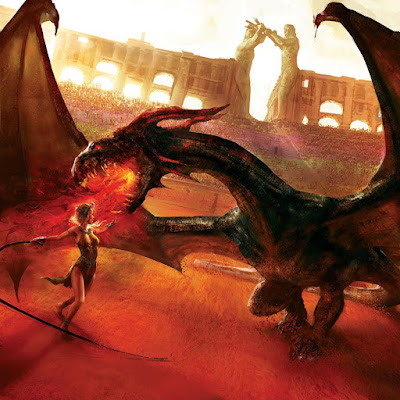 George R.R. Martin's fantasy is noted for his high level of realism, grit and incredibly restrained use of magic or fantastical creatures. Apart from this bit, obviously.

A Song of Ice and Fire is notable for its (relatively) restrained attitude to magic. There is very little in the first book, a little more in the second and it's only with the introduction of continent-spanning candle-based communication systems, magic trees and R'hllor's on-demand (but highly unreliable) way of answering questions in the latest volumes that the level of magic in the series has even started to approach that of other series. This "stealth fantasy" approach, allowing people who'd normally run away from a book featuring wizards chucking fireballs at one another to read the books under the (increasingly tenuous) excuse it was really "historical fantasy". Some of these readers have even stuck around to enjoy other works, some of them with much higher levels of magic in them.

Similarly, if there is one bane of fantasy it's The Prophecy. Many fantasy series have employed The Prophecy as a narrative device, some reasonably well and originally (The Wheel of Time), some whimsically (The Belgariad) and some pretty straight and boringly (much of the rest of the genre). A Game of Thrones takes great delight in setting up and then smashing the prophecy of the "Stallion That Mounts the World" before the novel is even over. Later volumes see other prophecies assert themselves with varying degrees of success, in some cases with multiple candidates seeming to fulfil the same prophecy through completely different sets of circumstances, fuelling discussion and debate. 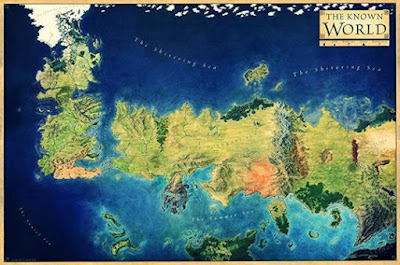 One of those fantasy worlds where "Here Be Dragons" is written on the explored bits.

Since Tolkien, worldbuilding has formed a major cornerstone of the genre, and indeed A Song of Ice and Fire is replete with chronologies, maps and family trees. However, Martin has also been restrained in giving out such information. Hard info on history much before the Doom of Valyria is entirely missing, with the characters forced to rely on (highly uncertain) myths and legends instead. And while detailed maps of Westeros and (now) Essos exist, the majority of the world remains unexplored. We've learned a huge amount about Martin's fictional world, but the edges of the maps remain greyed out and much of the backstory remains uncertain. 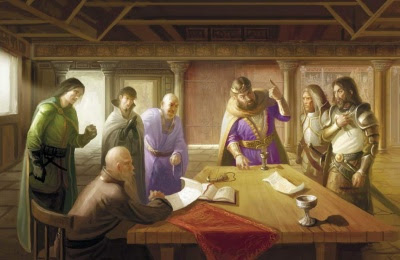 Political intrigue is hard to do in a fantasy novel where no-one really cares about the fictional families and countries involved. Martin's masterstroke here is to encapsulate each region of Westeros into a single family and each family into a handful of representatives, whom we can get to know and, through them, their families and their factions. Even more intriguing is his decision to then show variations within those families, and to shade every character with moments of redemption, villainy or tragedy. The result is, as one review put it, a series that captures "the intoxicating complexity" of the Wars of the Roses or the Roman Empire whilst still telling a manageable and comprehensible story.

Of course, Martin's biggest success was his cast of characters, which may be ultimately unmatched in the genre. From the scheming Cersei to the witty Tyrion (whose wit masks a darker side) to the overly noble Eddard to the inexperienced Daenerys, each comes across as a fully-drawn character with foibles, moments of wisdom and humanity. 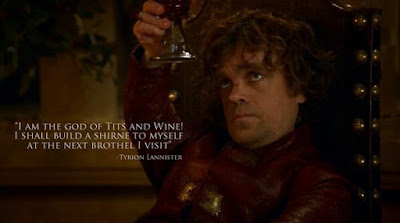 Remember that bit where Tyrion turned out to be a rapist? No, the TV writers didn't either, apparently. Awkward.

Certain fantasy authors, such as Stephen Donaldson and Glen Cook, didn't shy away from the darker side of things before Martin, but Martin was certainly the one who brought these elements to the fore and made them successful. Sudden character deaths and not backpedalling from the baser side of humanity gave the books a threatening tone rarely seen before in the genre, not to mention numerous scenes which the squeamish will not enjoy. Unfortunately, some authors who have followed in Martin's train have dwelt on the darker side of humanity to the point of nihilism and wallowing in misery for misery's sake. Martin also depicts the lighter side of humanity, through humour (anything Tyrion says), heroism (Jaime Lannister jumping into a pit to fight a bear with only one hand) and redemption (Jaime again, but also arguably Stannis - in the books anyway - and maybe Theon). The depiction of the Seven Kingdoms at peace, at the start of the books and in the prequel novellas, also shows that despite the grimness of war, this is ultimately a land and a people worth saving. 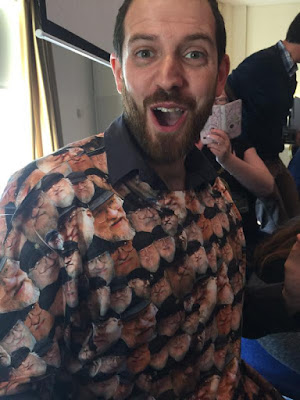 Joe Abercrombie wearing his influences on his sleeve.


A Feast for Fantasy

A Song of Ice and Fire has gone on to be hugely influential in the fantasy field. A number of writers have followed in Martin's wake who, even if they've never read him, have found the genre much more welcoming and open to harder-edged works in his wake. These range from Steven Erikson and Scott Bakker's dark 'n' gritty fantasy epics to the more adventurous books by Scott Lynch and Joe Abercrombie's grimfunny First Law works. Even literary darling Michael Chabon has come out as a GRRM fan (even if only from his earlier work, in a marvellously hipsterish author-fanboying moment). The immense success of the Game of Thrones TV series has also led to renewed interest in film or TV versions of other fantasy properties, with The Kingkiller Chronicle, the Shannara series and the Discworld City Watch books all under option or in production. 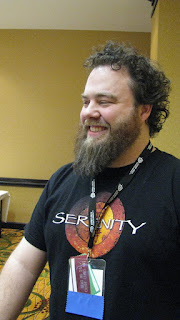 "I am aware of the theoretical existence of something called 'deadlines'."


The impact of A Song of Ice and Fire was seismic, on the genre of epic fantasy both in books and in the visual medium, an area where the genre had previously struggled. Despite the obvious visual qualities of the genre, almost every previous attempt to make an epic fantasy film or TV series had crashed and burned, and over the years there'd been more than a few attempts.
Posted by Adam Whitehead at 21:14

Email ThisBlogThis!Share to TwitterShare to FacebookShare to Pinterest
Labels: a game of thrones, a song of ice and fire, george r.r. martin, history of epic fantasy

While I read and to some extent understand the process and reasons for the expansive series and long waits between books, I know many - and more all the time - readers who refuse to buy or start reading a new series until all it's components have been published. This applies especially to older readers such as myself (I'm 70). I ha e up on Wheel after book two when it was rumored to go not to three volumes, but six...it's hard to justify, in my mind, any need for such a long telling of the story.

Unfortunately, this bulking of fantasy has become prevalent. More and more I look for single book, or trilogies at most, that are well written with good characterizations, settings and plots, and they're getting harder to find. That fact has begun to drive many readers away from fantasy, which they loved in the Seventies, Eignties, and toward SF, which still offers stand-alone novels of quality.