Captain James T. Kirk attends the launch of the USS Enterprise NCC-1701-B. An emergency situation arises and Kirk, as usual, helps save the day, but he is apparently killed in the process. Seventy-eight years later, Captain Jean-Luc Picard of the Enterprise 1701-D is put in a desperate situation when a fanatical scientist starts destroying entire star systems. Picard is going to need some help... 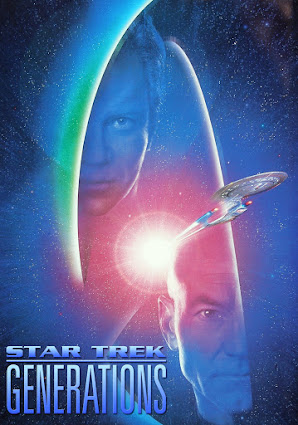 With the conclusion of Star Trek: The Next Generation in 1994, a TV series that dwarfed the popularity and reach of its predecessors, Paramount was keen to move the show and its popular cast onto the big screen as soon as possible. Overriding the concerns of the production team, the film was immediately put into rotation to start shooting as soon as filming was completed on the TV show and to be on cinema screens before the end of the same year. It was a tall order, leaving the cast and crew exhausted from working on the TV show for seven years and then straight into a full-length feature film.

Some of this can be seen on screen. Star Trek: Generations (the first film in the series to drop the roman numerals) is a solid but unexceptional film, something of a surprise given it features Captains Kirk and Picard joining forces to take down a mutual threat, a charismatic villain played by Malcolm McDowell. There's some entertaining comedy beats and some very good characterisation, particularly of Lt. Commander Data (Brent Spiner) as he gets used to his "emotion chip". Most of the castmembers get at least a brief chance to shine and, in the scene where the Enterprise-D's saucer section crash-lands on a planetary surface, one of the franchise's most memorable action and effects set-pieces.

The film relies a little too heavily on the TV show for setup. Villains Lursa and B'Etor have very little motivation and if you hadn't seen them already in the TV show, you'd have no idea why them showing up is a big deal. Similarly, Guinan (Whoopi Goldberg) feels like a bit of a walking deus ex machina in the film and her character has no real arc.  The story also feels a bit overworked and overcomplicated, with too many moving pieces and a TV-like approach of pressing on regardless of if the plot makes sense  (Soren not being able to beam into the Nexus from a ship already feels a bit iffy, but the jump from that to blowing up entire stars to shift the Nexus's path feels extreme). The film's big ending being a fistfight between two middle-aged gentlemen and an older one on a big rock is also rather underwhelming. Destroying another Enterprise also feels a bit gratuitous, although it is at least done in an impressive manner.

Still, it's a long way from the worst entry in the Star Trek pantheon and it has fun moments. William Shatner takes a delight in hamming up every second he's on-screen, but for once this is more charming than annoying, due to his limited screen time (he has a brief appearance at the start of the film and then at the end, more of an extended camo than the promised film-length team-up). He and Stewart make for an entertaining team, even if the gulf in their respective acting abilities is more of a yawning chasm. Malcolm McDowell can do "charming but evil" in his sleep and the film packs a lot into its running time.

Star Trek: Generations (***½) isn't going to be winning any prizes for being a classic movie, but it is a solid and entertaining piece that does its job - passing the baton from one generation to another - efficiently.

I wish they found a more compelling death scene for Kirk than falling off a cliff. That was my biggest criticism of the movie.