Lucasfilm writer/producer Dave Filoni's profile on the company website was updated this week, confirming him in the title of "Executive Creative Director." This spurred a lot of excitement as fans and even some of Filoni's collaborators rushed to congratulate him. 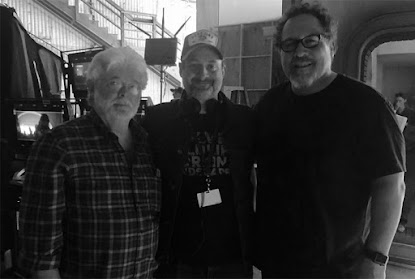 The move actually isn't new, having taken place in the summer of 2020. Disney had simply not gotten round to updating its profiles until this week.

Still, the promotion does reflect that Filoni is now seen internally and externally as one of the company's most important assets when it comes to the Star Wars universe. President Kathleen Kennedy was closely involved in the development of the sequel trilogy (The Force Awakens, The Last Jedi and The Rise of Skywalker) and the first two spin-off movies (Rogue One and Solo) but has since taken a more oversight role as Lucasfilm's role has expanded to incorporate other properties; she is now also overseeing work on the Willow TV series and a fifth Indiana Jones movie as well as the battery of Star Wars projects currently being developed. The mixed reception to the Star Wars movies has been pinned on a lack of creative planning and oversight, with the different writers and directors (including those fired by the studio) allowed to pursue their own ideas rather than developing a cohesive through-line for all three films.

In contrast, Filoni (who was chosen and mentored by George Lucas to work on the franchise) is known for developing storylines and setting up plot points that might not come to fruition until years down the line. These skills made his two animated projects, The Clone Wars and Rebels, highly popular and acclaimed among fans whilst other Star Wars projects were attracting a more mixed reception. Filoni has since collaborated closely with Jon Favreau on a number of projects, including the live-action television series The Mandalorian (set to start shooting its third season shortly) and The Book of Boba Fett (in production now), as well as upcoming spin-off Ahsoka. Reportedly Filoni and Favreau have set up a big "event" story spanning all three shows which will culminate later on. This story will presumably revolve around perennially popular Star Wars villain Grand Admiral Thrawn, whose future return has been hinted in The Mandalorian.

Filoni's promotion, though it might not be quite as seismic as some have reported - he is not being put in sole charge of the Star Wars franchise and isn't quite "the Kevin Feige of Star Wars," at least not yet - will add confidence that Lucasfilm is righting the ship about the disappointment of The Rise of Skywalker by promoting people with a proven track record in knowing what they are doing.

The Book of Boba Fett is expected to air before the end of 2021, with Season 3 of The Mandalorian to follow in 2022. The next Star Wars theatrical release, Patty Jenkins' Rogue Squadron, is set for release on 22 December 2023.