News has sadly broken that Japanese fantasy writer and artist Kentaro Miura has passed away at the age of 54 from an aortic dissection. 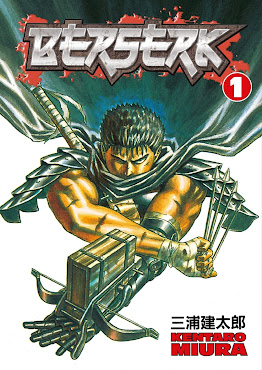 Miura is best-known for his creation, writing and drawing of the incredibly popular Japanese manga Berserk, which he began in 1989. The manga is noted for its dark, gritty fantasy setting based on Europe, marking it as a precursor to works such as A Game of Thrones and the "grimdark" fantasy genre. Miura, a noted perfectionist, spent huge amounts of time working on each installment of the manga, with production rate dropping to just a few instalments each year. Over thirty-two years, 363 chapters of the manga were produced, collected in forty collections. The manga is nowhere near complete, with numerous story and character arcs still in play.
More than 50 million copies of Berserk have been sold, making it one of the biggest-selling manga series of all time.
Miura's other work includes Futabi (1985), King of Wolves (1989), Gigantomakhia (2013-14) and Duranki (2019-21).
Posted by Adam Whitehead at 13:33

He will be missed.

It's a great tribute, but his name was Kentaro 'Miura'

An absolute Legend. RIP. Though why have you spelt his name Mihara when it’s clearly Miura?