Richard Halliwell, one of the leading creative visionaries at Games Workshop and the co-creator of the Warhammer fantasy battle game, has passed away. 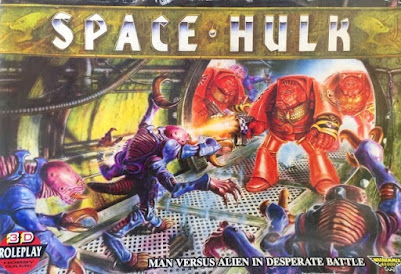 Halliwell co-designed the original Warhammer wargame in 1983, working alongside Rick Priestly and Bryan Ansell. The game drew on Halliwell and Priestley's earlier work on a 1978 wargame called Reaper, but featured a much larger scale and allowed for more elaborate games and worldbuilding. Warhammer became a huge success, propelling Games Workshop to greater achievements.
Halliwell worked on several other games, including Block Mania (1987), a board game set in the Judge Dredd universe. He also worked on the second edition of Warhammer (1984).
In 1988 and 1989 he produced two new games for Games Workshop which were both hugely acclaimed. In 1988 he published Dark Future, a post-apocalyptic miniatures game where the player controls a driver trying to make it across America. The game resulted from an idea he had for a miniatures game in the Judge Dredd universe, which eventually made it to print as a spin-off of the Judge Dredd tabletop roleplaying game, Slaughter Margin. The original setting was created by Marc Gascoigne. The Mad Max-influenced game became a cult classic and has seen digital versions released recently.
In 1989 Halliwell co-created the game (with Dean Bass) he'll probably be best remembered-for. Space Hulk is an iconic title spinning off from the Warhammer 40,000 game, pitting an isolated number of Space Marines trying to defeat alien invaders on a rotting, Chaos-infested derelict starship. Noted for both its simplicity and is incredible difficulty, Space Hulk became one of the most popular Games Workshop games of all time. It's subsequently been re-released three times in new editions, and ported to video games no less than six times.
His other credits include Combat 3000 (1979), Imperial Commander (1981), Rogue Trooper (1987) and The Tragedy of McDeath (1986).
A hugely influential game designer, he will sadly be missed. A thousand bolters shall be fired in his honour.
Posted by Adam Whitehead at 17:33

Thanks for SpaceHulk. Farewell HAL!

Ah the first time we set up space Hulk and got my hands on Genestealers. Dry brushed the to death. I am sure i got block war for being in the que when Liverpool opened. Got Jacksons and Livingstones autograph on the 10 year White Dwarf..Good times

Sad news, condolences to his family. He leaves a great legacy in all his brilliant games.