After yesterday's confusion about the setting of the Dungeons & Dragons movie, which they've now confirmed is indeed the Forgotten Realms world, Wizards of the Coast have teased that another TV show they are developing may be about their signature character of Drizzt Do'Urden. 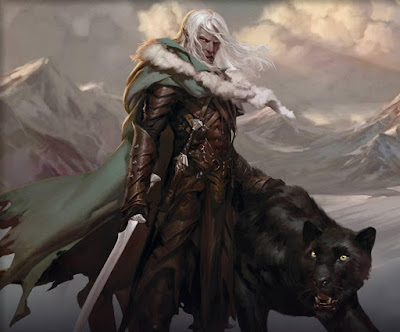 News broke in January that Hasbro's internal production company, eOne, are developing a Dungeons & Dragons project for television. This would be released alongside the new film and would start building a D&D TV and film "multiverse," similar to the Marvel and Star Wars universes. D&D, to be fair, is well-suited to such an approach, with the game featuring over a dozen worlds and many more other planes and dimensions in which stories, series and films can be told. The Forgotten Realms and Dragonlance medieval fantasy worlds are the best-known, but others include those of Dark Sun, Ravenloft, Mystara, Greyhawk, Birthright and Eberron, with the Spelljammer setting (featuring space travel) and Planescape line (featuring interdimensional travel) linking them together.

Derek Kolstadt, who wrote or co-wrote the first three John Wick movies and also worked on The Falcon and the Winter Soldier, has been tapped to write and potentially showrun the new series.

Today, Polygon learned direct from Wizards of the Coast that this series may revolve around the Forgotten Realms - and arguably D&D itself - signature character of Drizzt Do'Urden. Drizzt is a dark elf (or drow) ranger from the Underdark who fights evil as one of the "Companions of the Hall," alongside halfling thief Regis, human archer Cattie-brie, barbarian warrior Wulfgar and dwarven leader King Bruenor of Mithral Hall. Drizzt fled his evil, corrupt home city of Menzoberranzan as a youngster and is regarded as a traitor by his people, leading to conflict with the dwarven city of Mithral Hall and the human city of Silverymoon.

Drizzt first appeared in the 1988 novel The Crystal Shard by R.A. Salvatore and has since appeared in more than thirty additional novels, charting his adventures across a time period of almost two hundred years (due to drow lifespans reaching or exceeding eight centuries, Drizzt is still considered a youngster). The Legend of Drizzt over-arcing series is the most popular line of Dungeons & Dragons novels ever published, selling more than 30 million copies (marginally more than Margaret Weis and Tracy Hickman's Dragonlance series) over more than thirty years, making Salvatore one of the biggest-selling living fantasy authors in the field of epic fantasy. The popularity of Drizzt is such that even when Wizards of the Coast decided to reduce the number of D&D novels being published in 2016, Drizzt books have remained in production; the only three D&D-branded novels published since 2017 feature Drizzt as the protagonist, and a new Drizzt-centric trilogy, The Way of the Drow, begins publication this year.

Although Drizzt is immensely popular - more novels featuring the character have been sold than actual D&D rulebooks - he is also regarded with disdain by some fans, some feeling the character has been over-exposed and is no longer as interesting as in his early books, and others resenting the number of "copycat" characters created by players over the years. Others also feel the Drizzt's popularity has overwhelmed that of the rest of the Forgotten Realms setting, with arguably more interesting characters sidelined or under-utilised to keep the focus on Drizzt.

Previous film and television adaptations of Drizzt have also foundered on the character's ethnicity. Dark elves are dark-skinned in a manner that does not really exist in the real world, but some have drawn as analogous to actual human ethnic groups. Salvatore's depiction of the drow as being universally evil aside from Drizzt, his father Zaknafein and the morally-dubious assassin Jarlaxle, has also been criticised, especially as other Forgotten Realms books and products have increasingly focused on the noble drow goddess Eilistraee and her followers, who seek to redeem the race and end the curse that prevents them from walking in sunlight. These issues, extending to how you depict and cast the dark elves, were regarded as problematic enough to make the idea of depicting them on screen a headache.

It sounds like Wizards may have overcome this problem. Recent artistic depictions of Drizzt and other dark elves have given a purple hue to their skin unlike anything in the real world, perhaps a mild retcon to make them less like real human ethnic groups. There may also have been a decision to lean into the themes of racism and colonialism that run through Salvatore's books, which even in the 1980s were regarded as unusual and forward-looking (it not tremendously sophisticated), in a more modern context.

Whatever the case, it does sound like a live-action depiction of Dungeons & Dragon's most popular - and divisive - character is on the cards. More news as it develops.

If they stay true to the book..I'm here for it.

As long as it’s not on Amazon prime

Why in the world, they don't make a movie of The Legacy to kick off a Drizzt trilogy is beyond me. The right director and cast, it would own the box office. Maybe one day.

If true to R. A. Salvatore, it will be an epic fantasy for all whom enjoy the legend of Drizzt!

I don’t know why they just don’t do a high end animated series….computer animation. Dodges all the racial problems.

Been wanting this for a long time

I really hope they can get it done and right. I love the legend of dritz series and RA Salvatore.

Wow best news I have heard in a long time ,the Dritz legends are the best and RA Salvatore a great author

Please have the right director to film it.