The Federation's most feared enemy, the implacable Borg, have returned to mount an assault on Earth. The crew of the USS Enterprise lead the fight against them, but the Borg surprise their opponents by employing time travel to try to wipe out humanity by preventing First Contact between humanity and an alien species. With little choice, Captain Picard and his crew have to follow the Borg back through time to defeat them. 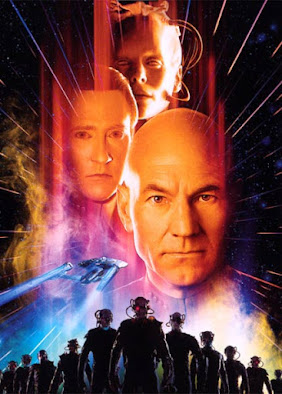 With Star Trek: Generations having done the heavy lifting of transferring the mantle of the Star Trek movie franchise from Kirk's crew to Picard's, it was time for the Next Generation production team to cut loose. First Contact was planned, written and filmed with many of the restrictions from Generations gone: the film had a larger budget, did not have to incorporate any of the original crewmembers and was given greater freedom. Writers Ronald D. Moore and Brannon Braga decided to bring back the Borg, the uber-terror from The Next Generation, this time with enough money to do them justice. They also incorporated a time travel storyline from a suggestion by producer Rick Berman, and incorporated Patrick Stewart's request for more action and a more heroic role for Picard. Castmember and by-now veteran Star Trek director Jonathan Frakes was also asked to step into the big chair, his familiarity with the cast and the limitations of filming on what was still a low budget for a big SF effects film (the same year's Independence Day had twice the budget and was still proclaimed a low-budget SF movie for the time).
The result is, easily, the strongest of the four Star Trek films featuring the Next Generation crew, although it is far from flawless. Central to the plot are the twin pillars of Data's desire to become more human, which the Borg Queen perverts in an effort to force Date to help her overcome the ship's systems, and Picard's guilt over his former assimilation (leading to the deaths of over ten thousand Starfleet personnel) and resulting obsession with stopping the Borg, no matter the cost. The film operates on some familiar ground to The Wrath of Khan here, with Moby Dick references getting wheeled out for a second airing, though the spin that it's our protagonist who is fuelled by ill-advised vengeance rather than the villain keeps things feeling fresh. Patrick Stewart, Brent Spiner and Alice Krige (as the Born Queen) get the lion's share of the world in the film and are all excellent.
Other characters are less well-served. Riker, Troi and La Forge are shunted to Earth's surface in a comedic subplot where they try to convince Zefram Cochrane (James Cromwell) to make his famed first warp flight which triggers First Contact. This is very much a "TV episode" storyline and isn't very very fleshed out, despite a fine performance by Cromwell. It does feel like this story more exists to reduce Jonathan Frakes's screen time, freeing him up to direct elsewhere, and it takes out several other characters at the same time. It's also a bit odd that none of the characters in this subplot seem bothered about losing contact with the Enterprise for such a long period of time.
The main story on the Enterprise is stronger, with some pretty cool set-pieces (the zero-gee sequence with the crew and Borg fighting over the Enterprise-E's deflector dish is a great idea, though it does go on a bit too long) and a number of really great scenes, like a shoot-out with the Borg in a 1930s setting on the holodeck and the scenes of the Borg Queen "seducing" Data (figuratively and, slightly randomly, literally). There's also a grisly horror angle to the action and directing, with the Borg now able to assimilate crewmembers on the spot and a merging of biological and technological elements in a way that would make H.R. Giger break out in a cold sweat. Star Trek has, arguably, never been more of a horror piece than in this film.
The film is generally well-paced and doesn't outstay it's welcome. As a film taken purely on its own merits, it's a decent slice of entertainment and one of the better entries in the franchise. It was also the one that pretty much solidified the "even-numbered Star Trek films are always good!" meme). However, the film has problems when taken as a greater part of the Star Trek whole. It severely downgrades the threat level from the Borg. Multiple previous episodes of the TV show had established that the Borg were able to adapt to Starfleet weapons with contemptuous ease and their ships were now effectively immune to phasers and photon torpedoes. Yet in the opening space battle, ordinary Starfleet vessels pummel the first Borg ship with standard weapons until it explodes (making a bit of a mockery of the Battle of Wolf 359 in the process). The second is taken out by a desultory single volley of quantum torpedoes. Individual Borg drones are more dangerous with their new instant-assimilation ability and their familiar ability to adapt to incoming fire, but can also be killed in ordinary hand-to-hand combat without too much trouble. I get that the TV show had made the Borg effectively invulnerable and the choice was between never using the Borg again or downgrading them, but I can't help but feel that weakening them was the wrong move. Before First Contact, the Borg were an unstoppable force of destruction; afterwards, they are just ordinary Star Trek aliens, and their mythic power was forever lost, a feeling their subsequent over-use in Voyager did not alleviate.
Still, if that's the price we pay for a pretty good movie, so be it. First Contact (****) is a solid slice of Star Trek cinematic spectacle, Star Trek's finest nod at the horror genre and an entertaining SF action movie.
Posted by Adam Whitehead at 16:47

You’re a bit dismissive here. The cube is destroyed after obliterating a fleet because Picard gives the remaining ships a specific target.

If the shields were down, that would make sense. But as established numerous times by this juncture, once Borg shields have adapted to your weapons and worked out how to account for frequency modulations, that's it. Firing your weapons at one point on the surface is identical to firing at another.

If they'd had one extra line of dialogue saying "the new shield disruptor weapon works!" or if all the ships had been using quantum torpedoes, a new weapon the Borg had not previously encountered, that would have been more plausible.