The God is Not Willing by Steven Erikson

More than a decade of peace has passed since the fall of the Crippled God. The Malazan Empire, once an ever-expanding nation, has secured its borders and set about bringing stability and order to its holdings. One of the furthest-flung of its outposts is Silver Lake, an isolated town in the far north of Genabackis, still reeling from the events of many years earlier, when three Teblor descended from the mountains and brought chaos with them. 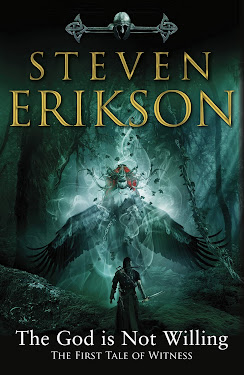 Email ThisBlogThis!Share to TwitterShare to FacebookShare to Pinterest
Labels: steven erikson, the god is not willing, the malazan book of the fallen, witness

Would you recommend this book to someone who hasn't read any of the other Malazan books.

Is it accessible in the sense that it would make a good entry point? I'm of the camp that doesn't like Garden of the Moon because by page 200 I still did not care about anyone or anything happening in the book so stopped reading. This sounds like an actual story.

I'm not sure how it would work for someone completely unversed in the Malazan backstory. The "story of the moment" doesn't require much pre-knowledge, but if you know Karsa's story from Book One of House of Chains, it makes most of the book make more sense.

i recently reread the main series in preparation for this. it is my all time favorite fantasy series, but the first two prequel books left me a bit cold (granted the tiste stories were what I cared about the least in the MBOTF), so this review is a bit of a relief

Ugh why so much later in US for release

Super stoked, the latest crop of fantasy authors are great but no one holds a candle to Erikson!