House of Chains by Steven Erikson

North Genabackis. Karsa Orlong of the Teblor tribe sets out on a raid that will go down in infamy among his people and their neighbours. He plans to carve his name in blood and chaos across the north, and succeeds far beyond his original aims. But Karsa's journey also opens his eyes to a world that is far stranger than what he thought it would be. 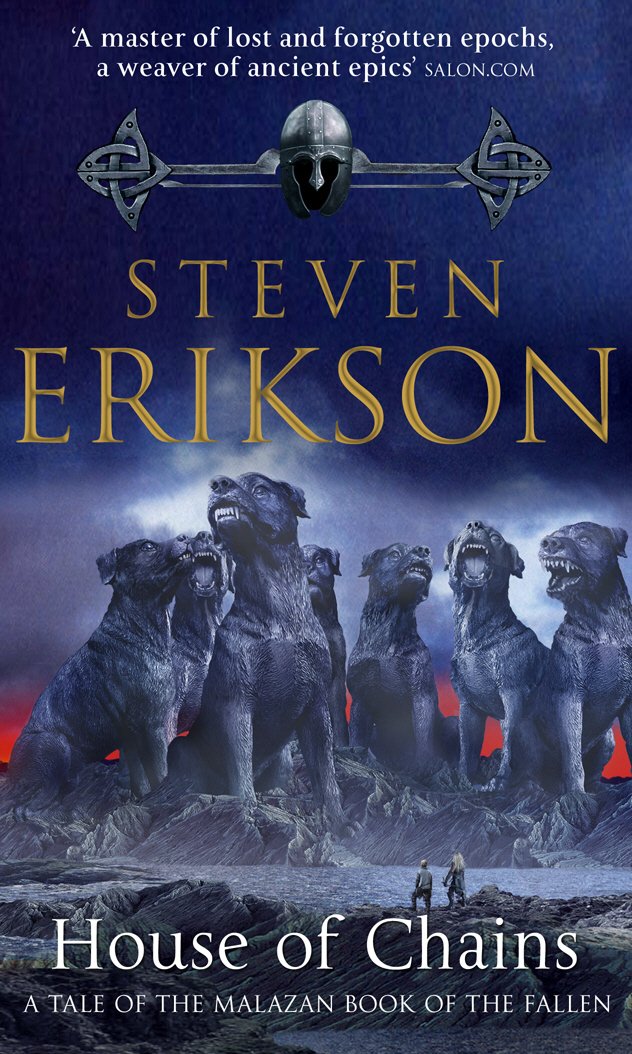 Months later, the Malazan 14th Army arrives in Seven Cities to crush the rebellion known as the Whirlwind. Newly-appointed Adjunct Tavore Paran is untested, and so are most of her troops. Only a few key veterans can be found to hold the force together. Ranged against them are veterans of years of raiding and war, the Dogslayers and the formidable sorcery of the Whirlwind Goddess herself. The seeress Sha'ik's victory appears inevitable, but internal divisions threaten to tear her army apart. As the 14th Army marches on the Holy Desert, the Seeress chooses to wait. Elsewhere, a new threat has arisen: strange ships bearing powerful warriors sailing out of the western seas, seeking the Throne of Shadow on remote Drift Avalii. The god known as Cotillion seeks champions to defend the Throne, whilst one of those strange warriors - the disgraced Trull Sengar - turns traitor to redeem his honour, and that of his entire race.

For the three previous books in the Malazan Book of the Fallen, Steven Erikson adopted a similar structure: the introduction of multiple plot threads which proceed in apparently isolated tandem for many hundreds of pages before meeting in an almighty final battle at the end. This structure didn't entirely work for Gardens of the Moon (due to a somewhat confusing opening) but was spectacularly successful for Deadhouse Gates and Memories of Ice, two of the finest epic fantasy novels published this century so far. For House of Chains, Erikson decided to change things up.

This is more of a collection of two separate novels rather than one long narrative. The first 270 pages or so form a continuous, self-contained story focusing on Karsa Orlong (think of Conan the Barbarian dialed up to 11) and his quite spectacularly bloody journey of self-realisation across Genabackis, a bit like The Pilgrim's Progress if the pilgrim was a psychotic ten-foot tall barbarian warrior wielding a sword so massive it would struggle to get into a Final Fantasy game. Karsa is the favourite character of many Malazan readers, for his clear character arc and growth (from psychopathic murderer to philosophical warrior-savant), his straightforward approach to solving problems (destroying them utterly), his clear nod to fantasy antecedents (like Conan and Fafhrd) and his cool action scenes. However, it's also worth noting that in his origin story, he's also a bloodthirsty maniac, repeat rapist and murderer. Erikson himself has noted that Karsa is a problematic character and was intended to be so. Karsa's odyssey is fascinating, well-written (Erikson's growing confidence in his prose skills from book to book is impressive to behold) and raises important questions, such as interrogating Robert E. Howard's old notion that barbarism is the natural state of humanity with civilisation as a brief interregnum which will end as soon as natural resources run out. There's plenty of black humour in the sequence as well, and it does explain at least part of what on earth was going on with that ship in the Nascent (a plot thread that's been running for three books now), but it's hard to entirely enjoy a story which relies so much on human suffering.

The remaining 750-odd pages of the book return to a more traditional format, with multiple story threads unfolding in tandem: Trull Sengar and his rescue from the Nascent by a band of T'lan Imass; the misadventures of a Tiste Liosan warrior party (who learn that their overwhelming arrogance is not helpful when asking others for help); scheming and backstabbing in the Whirlwind camp; Crokus, Apaslar and Kalam being recruited by Cotillion for various missions; and the march of the 14th Army towards Raraku (a sort-of reverse Chain of Dogs, except we spend far fewer pages on it). The shorter page count for this sequence requires greater focus from Erikson, which he achieves admirably: each story unfolds with verve and pace, and there's less long-winded moments of moral reflection as Memories of Ice occasionally threatened to unleash. The shorter page count does occasionally mean that some story arcs are sold a bit short, and the occasional Gardens of the Moon-esque moment of total confusion (such as the introduction of a new pack of psychotic magical hounds who are not the same pack of psychotic magical hounds as those who appeared in the three previous books, but are very similar) does threaten, but is mostly averted.

The book is also something of an anti-epic fantasy, and indeed, an anti-Malazan novel in structural terms. When I first read the book fifteen years ago I regarded it as a massive anti-climax, as the novel builds and builds to what appears to be a huge conflagration which never quite arrives (we do get it in the sixth volume, The Bonehunters, instead, which makes me occasionally wonder if Erikson could have restructured things so Karsa's arc was removed to its own novel and the Battle of Y'Ghatan was moved into the end of House of Chains; I suspect this would not be practical). On rereads the reasoning behind the far less epic (although still very bloody) ending is much clearer, and more laudable. House of Chains is a dark book in a sometimes very dark series, but also a series where compassion and shared humanity are key themes. These themes are explored further in this novel and given greater weight, contrasted against the dark insanity of characters such as the loathsome Bidithal. This is good, but it can make for hard going at times.

House of Chains (****½) is not operating on quite the same qualitative plain as Deadhouse Gates and Memories of Ice. It's a faster and more concentrated read, but it's also a darker and much murkier one, where the reader has to follow some very unpleasant characters for large stretches of the book. It's also the most philosophically and intellectually stimulating book in the series so far, asking big questions and refusing to offer pat answers. For some readers House of Chains marks a shift in the tone and feel of series which they don't much care for, away from a epic fantasy narrative and more towards musings on the human soul (which threaten to overtake later books in the series altogether), but for others it's the moment that Malazan grew up and started staking a claim to being the most literate epic fantasy ever attempted. The novel is available now in the UK and USA.
Posted by Adam Whitehead at 12:49

Email ThisBlogThis!Share to TwitterShare to FacebookShare to Pinterest
Labels: house of chains, steven erikson, the malazan book of the fallen

I have a hard time articulating just how much I hate Karsa Orlong.
This murderous, raping moron is gifted with plot-granted unearned success in book after book.

He's one of the two things that ruined the series for me.

I hated him too (and his horrid grandfather, the man who shaped Karsa's crude, violent personality), but it didn't come close to ruining the series for me, just made me grind my teeth through the first hundred or so pages of this book. (And I hated Bidithal much, much more.)

Karsa is more like a Schwarzenegger parody of Conan. Conan in Howard's tales finds no glory in bloodshed, it's just the only option in situations he runs into involving demonic creatures, scheming wizards, other barbarians, and various more civilized murderers. He's more likely to help out the weak (at least sometimes) than stomp them into oblivion like Karsa does in the beginning section of this book.

During my first time reading this book, I remember wondering if Karsa was really going to go kill "children". I still remember my relief and bemusement when it turned out that the "children" he kept referring to were adult humans. It'll be interesting to see what happens in the upcoming trilogy.

Are you re-reviewing the whole series? Because I'm always down for reasons to go back to Malazan.

House of Chains was never one of my favorites in the series, even though it is still a strong book. I have an odd (probably irrational) love for the Darujhistan novels, and love Gardens and Toll the Hounds probably more than they deserve. Probably because I adore both of their climaxes so much that I don't mind the journey it takes to get there, just anticipating it :)

Im gonna eat my words and say that I was way wrong on this series. On my third try I finally got into Malazan...while GoM was enjoyable it was an overwhelming and confusing beginning and ive never referred to an appendix like I did here...but then I devoured Deadhouse which was just incredible. After reading your review, I kept looking for betrayal given the likeness of chain of dogs to the red wedding... despite the betrayer being the most obvious villain in the novel that ending was just devastating and after that I knew I was really hooked. Im eager to start on Memories of Ice and im very glad I tried again although have not been hearing too many good things about this Karsa Orlong fellow and the books he stars in...is it worth reading the whole series? Or jumping to that R Scott Baker rec after book 3 of Malazan? Its a long wait for the next Abercrombie (well, hopefully only a year), Sanderson, Rothfuss, Lynch and Martin...

PS: I also recently finished The first fifteen lives of harry august...that was one of the most beautiful novels I've read in a very long time and I never would have found that gem without your review. Thanks!

Karsa was not my favourite character but i appreciate him. You should read Erikson's essay on the myth of the noble barbarian to understand the motivation for this character. Nevertheless, I must say the moment at the end of the book where he laid the t'lan imass to rest has stuck with me for the last decade.

So you dont have to look it up here ya go. http://www.steven-erikson.com/index.php/the-problem-of-karsa-orlong/

Worth noting that I posted a link to that article in the original review.